v Basketball in Kansas: Midseason Tournament Recap - Sports in Kansas 
Warning: include(../includes/bodytag.php): failed to open stream: No such file or directory in /home/kansass/public_html/ks/news/index.php on line 36 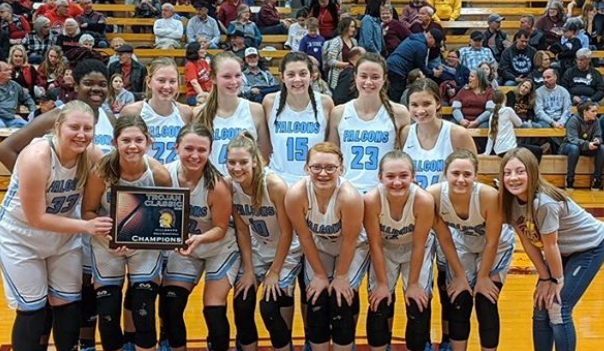 On Saturday night, No. 1 6A Campus boys defeated Bishop Miege, 64-59, in a thrilling overtime contest at the 77th annual Dodge City Tournament of Champions. Campus trailed by seven points midway through the fourth quarter. The Colts remained undefeated.

Miege 6-foot-8 sophomore Mark Mitchell, who is  five-star recruit to most recruiting services out there, earned tournament Most Inspirational Player honors after 20 points and 10 rebounds in the final. He led the tournament with 61 points and missed just two free throws in the tournament.

Mitchell already has an offer from KU. Shawn Warrior led a balanced effort for Campus with 16 points and 10 rebounds. Warrior, Thomas King and Sterling Chapman all earned all-tournament honors for the Colts. King had 15 points and four rebounds, and Chapman delivered 13 points and three rebounds in the final. Two-loss Miege is ranked third in 4A.

Topeka High girls beat Topeka Seaman, 76-67, on Friday in a Centennial League contest. Topeka High is first in 6A, and Seaman is third in 5A.

Liberal girls, ranked second in Class 6A, moved to 12-0 and won the Salina Invitational for the second straight year Saturday. Division I signees Katie Horyna and Machia Mullens earned all-tournament team honors, along with Aubrey Warden, who has significantly improved this year. Mullens earned the tournament MVP honors. Liberal beat Salina Central, 61-40. SC is fourth in 5A.

Lawrence boys won the Topeka Invitational for the second straight winter with a 53-52 victory versus Topeka West. Lawrence’s Mayson Quartlebaum has committed to Kennesaw State University.

No. 2 Andover boys beat Salina South, 63-43, for the Salina Invitational tournament. Andover, one of the state’s biggest turnarounds, stayed perfect.

No. 2 McPherson girls had a makeup league contest with Circle in a rare late January matchup of teams with perfect records. McPherson defeated Circle, 45-34, and moved to 10-0.

Great Bend boys have made a sizable improvement this winter behind a large senior class. GB defeated a pair of ranked teams to win the Bluestem tournament. In the semifinals, the Panthers defeated Kapaun, 60-52.

Pine Creek (Colo.) defeated Hays High, 50-46, to win the 35th annual Orange and Black Classic in Colby. Pine Creek is ranked tenth in Class 5A. Hays High had a season-high 21 turnovers, according to the Indian broadcaster Dustin Armbruster. T.J. Nunnery and Dalyn Schwarz each delivered 16 points. HHS is 8-3 after seven straight victories.

5A Basehor-Linwood girls defeated St. Joe (Mo.) Central, 55-51, and will play 4A K.C. Piper girls for the Bobcat Invitational Championship on Monday. Coach Jason Tatkenhorst, with long stints at Great Bend and B-L, recently cleared 300 career victories. Piper is second in 4A.

In a matchup of ranked teams, Eudora defeated K.C. Sumner, 57-40, to win the Tonganoxie Tournament. Eudora’s Reagan and Riley Hiebert earned all-tournament team, while Jayla Pierce was Most Inspirational, and Harper Schreiner collected tournament MVP. Eudora is seventh in 4A, K.C. Sumner is ranked ninth in 5A.

Chapman won the Royal Valley tournament with a 53-32 win against RV in the championship. Chapman is ninth in 4A.

The two GWAC rivals match up at least once more in the regular season on Feb. 14 and are both in the Cimarron sub-state. Scott City hit a trey at the end of the first half for a 21-19 advantage, but the Eagles led 38-31 entering the fourth. The game was tied at 45 entering overtime.

As well, Colby, one of the state’s biggest storylines in the season’s first half, four-year starting guard Hallie Vaughn cleared 1,000 career points. Colby is third, Scott City fourth in 3A.

Riley County girls are 10-0 and won the Hillsboro tournament. RC is fifth in 3A. Harold Oliver, one of the states top coaches, picked up win 600 earlier this season. RC knocked off Remington, Hesston and Hillsboro to take home the tournament title. Rock Creek, Perry Lecompton, and Santa Fe Trail are in the RC substate at Royal Valley (last years champ) that have winning records.

Haven boys remained perfect with a 51-45 victory against Cheney and captured the 50th Adolph Rupp tournament in Halstead. Haven is fifth in 3A.

Hesston boys won the Hillsboro Trojan Classic, and Hiawatha won the McLouth Invitational. Tyler Brockhoff earned tournament MVP, and Sage Meyer also earned all-tournament team honors. Hesston is ranked second in 3A, behind Hugoton, which suffered an upset 64-61 loss to Hutchinson Trinity in the semifinals of the Sterling tournament.

TMP improved to 10-1 and won its tenth straight contest with a 59-46 victory against Phillipsburg in the Mid-Continent League tournament championship at Plainville. TMP led 28-22 at halftime. Phillipsburg had advanced to the finals as the No. 8 seed with back-to-back wins versus teams that have been in the rankings (Hoxie, Ellis). TMP is ranked No. 10 in 3A. Phillipsburg is the three-time defending tournament champions, and TMP had won in ’15-16.

Larned boys captured the St. John tournament with a 64-50 victory versus Nickerson. Nickerson had a all-tournament team selection Cristian Peterson. Larned is 10-2 and has won four in a row following its lone two defeats.

Osawatomie defeated Uniontown, 51-49, and won the Pleasanton boys tournament. Oz is 8-2 this season and has won the tournament the last three seasons.

Girard girls and Cherryvale boys captured the Wilson County Classic. Cherryvale beat 4A ranked Iola 68-52 in the title game. The Chargers are a team that have surprised some people as they are outscoring opponents 61-to-45 this season to a 8-2 mark.

Hoisington has quietly emerged as a Class 3A contender with a 54-33 win against La Crosse and won the Hoisington Winter Jam. Hoisington is 9-1 and has won seven straight games. The Cardinals defeated Hesston, 56-53, on Jan. 18, for the Swathers’ only defeat. La Crosse ended its four-game winning streak and is 9-3.

Frontenac boys and girls both finished third in the Frontenac Kansas Army National Guard Invitational featuring much bigger schools from multiple states. It was the first time in the eight years of the tournament that either team had finished that high.

Rock Creek boys earned the Burlington Invitational Championship with Dawson Zenger as the MVP as they knocked off Sabetha. Zenger, a junior, is averaging over 25 points per game this season.

Sabetha girls captured the Burlington Invitational Tournament title with their win over Labette County (4A) on Saturday. Bluejays are ranked in 3A girls and part of a loaded Big 7 league that also features Nemaha Central.

In a wild Sterling Invitational boys’ tournament, third-seeded Sterling defeated No. 6 seed Hutchinson Trinity, 84-77, in three overtimes. On the girls’ side, No. 1 seed Sterling, ranked second in 2A, lost to fourth-fourth seeded Hugoton in the semifinals. In the championship, Hugoton beat Lyons, 48-34.

In the semifinals, Trego bested Smith Center, 47-18, with 22 points from Shubert. In the MCL quarterfinals, the Golden Eagles had another big performance with a 63-48 win versus TMP, including 27 by Shubert. WaKeeney is 12-0. Two-loss Phillipsburg is ranked ninth in 3A.

Erie’s Mark Bogner made a buzzer-beater trey to beat Baxter Springs, 33-32, in the Lancer Classic Championship, according to the Parsons Sun’s Sean Frye.

On the South Central Border League girls’ side, West Elk knocked off South Haven, 43-37. WE won the SCBL for the second time in three years. Madelyne Koop finished with 13 points and 15 rebounds, and Megan McClendon delivered 14 points and seven rebounds. West Elk is 11-0.

In the semifinals, the Patriots defeated Sedan, 51-29. McClendon delivered 16 points, and Koop had 17 points and 13 rebounds. WE is ranked seventh in 2A girls.

Humboldt girls captured the Pleasanton tournament with a 53-34 win versus Osawatomie.

Otis-Bison girls stayed undefeated and captured its first-ever Hoisington Winter Jam with a 40-16 win versus Ellinwood. O-B led, 32-7, at halftime. O-B is ranked eighth in 1A.

Tribune Greeley County boys earned the 48-42 win over St. Francis for the NWKL championship at Dighton.