Kyle Haas of Maize after winning the state title last season is one of the nations best. 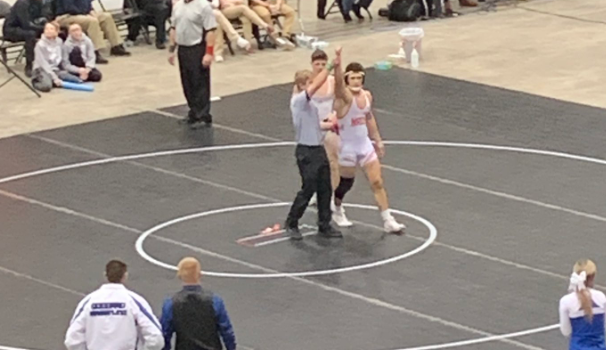 Last week’s highlights primarily came at two tournaments: the 57th Newton Tournament of Champions, and the boys and girls Bobcat/Ladycat Classics at Basehor-Linwood. Newton had 32 teams, including the top-three squads in Class 5A. All records from Track Wrestling, unless otherwise notated. All rankings as of Jan. 21.

At Newton, Goddard had 213.5 points, while Blue Valley Southwest was second at 190, and Maize ranked third at 183.5. Olathe South finished in fourth at 159.5, and Washburn Rural earned fifth at 159. McPherson followed in sixth at 115.

At 120, Newton’s Grant Treaster defeated Goddard’s Jason Henschel in a matchup of the top-two 5A wrestlers. Treaster won 4-2. Treaster improved to 28-1, and Henschel is 12-5. Treaster and Henschel have been 1-2 respectively in the last three polls, including Jan. 21. Treaster, like his father and older brother, has committed to wrestle at the Naval Academy.

At 152, Goddard’s Jace Fisher earned second with a 12-3 major decision loss to Maize’s Devin Gomez. Fisher is 17-8, and Gomez is 7-0. Gomez and Fisher remained first and second, respectively, in 5A.

At 160, Goddard’s Cayleb Atkins (20-1) earned the title with a key 3-1 sudden victory versus Maize’s Carson Wheeler. It marked Wheeler’s first loss of the winter, who dropped to 17-1. After a first-round bye, Atkins won three matches with a combined title of 4:47. Atkins and Wheeler remained second and third in 5A, respectively.

Nolan Craine (16-8) earned third at 170. His only loss came versus Blue Valley Southwest’s Seth Nitzel (24-0) with a 6-2 loss in the semifinals. Then, Craine earned 3-0 and 5-0 victories on the backside. Maize’s Duwayne Villalpando, a Nebraska commit, switched from first in 182 to first at 170. Nitzel and Craine are now second and third behind Villalpando, who medically did not compete in the tournament. He is 13-3 this year.

Kaden Glass (8-2) collected runner-up at 195. He had a first-round bye, then a 6-0 decision followed by a fair of falls. In the championship, Glass fell 3-0 to Washburn Rural’s Gavin Carter, who stands at 22-0.

At 285, Devon Dawson earned a minor upset in the championship. Dawson earned two wins by fall, then had a 6-4 sudden victory win versus Arkansas City’s Maximus Shannon. After a 51-second win by fall in the semifinals, Dawson defeated Valley Center’s Tony Caldwell by fall in 2:47. Dawson improved to 7-3, and Caldwell took his first loss of the year to drop to 24-1.

Caldwell and Dawson were ranked first and second, and then switched places this week in 5A 285.

Dawson, Saunders and Maize’s Kyle Haas and Dawson led the field with 32 points. Olathe South’s Dallas Koelzer, the winner at 138, tallied 31.5, while Goddard’s Atkins had 30. Treaster and Rural each had 29.5.

They remain first and second in 5A 220, respectively.

Maize, with its elite talent at the top, had a second-place finish from Cayden Hughbanks (13-4) at 132 pounds. In the finals, Hughbanks lost 3-2 to Emporia freshman Xerarch Tungjaroenkul (17-1). Previously, Hughbanks was second, and Tungjaroenkul third. Now, Tungjaroenkul is third, and Hughbanks fourth.

Brett Umentum (24-3) won at 126 with back-to-back wins versus ranked foes. He stayed third in the rankings. In the semifinals, Umentum beat Valley Center’s Alyeus Craig, 9-2, and then defeated Andale’s Hector Serratos, 5-1. Craig is 23-3, and Serratos stands at 19-2.

At 145, Brandon Madden (23-2) received a bye, then a fall in 2:42, followed by a technical fall. Madden won his last two matches, 4-2 and 4-0, including over Rhett Edmonson in the championship. Madden is again first in the rankings, and Edmonson remained fourth.

In the quarterfinals, Nitzel defeated Norton’s Cole Amlong, 7-0. In the semifinals, Nitzel beat Goddard’s Nolan Craine, 6-2. Amlong is second in 3-2-1A, and Craine is third in 5A.

The championship featured a 1-0 decision by Nitzel over Wichita South’s Malachi Karibo (24-1). Karibo is ranked first at 170 6A.

Jackson McCall (26-5) earned third at 182 with just a lone loss to Wichita West’s Saunders. In the third-place match, McCall had a 2-1 sudden victory versus Olathe South’s Blake Jouret. McCall bumped from third to second.

Beloit’s Matt Treaster became the third four-time individual state wrestling champion in state history with titles from 1981-94, according to kansashswrestling.com. Beloit won the team crown all four years. Matt wrestled at Navy, including a fifth-place All-American finish in 1987.

After Navy, he served as a Naval Fighter Pilot and is currently an Assistant U.S. Attorney. He was inducted into the National Wrestling Hall of Fame Kansas chapter in 2019. Matt has led the Newton Wrestling Club for many years.

Logan, currently a junior, was a combined 24-10 for Navy the last two winters. He won a state title for Newton.

This winter, Grant and Nick Treaster have continued the tradition. In addition to Grant’s title at Newton, Logan won at 106. Last year, Nick won national crowns in freestyle and folkstyle and was runner-up in Greco-Roman.

Grant Treaster, a two-time state champion, is 28-1. Before the Henschel match, Treaster had a win by technical fall, then a fall, and two wins by major decisions.

Additionally, OS’ Gavin Brown was dominant with five pins. He tied McPherson’s Landon Frantz for the most pins in the tournament. Frantz had 11:58 of total pin time, while Brown was at 14:58. Brown ranks third at 160 6A again.

Brown earned third at 160 with a loss to Goddard’s Atkins in the semifinals. Frantz (21-1) took third at 195 with a big backside run. Frantz lost to Seneca’s Trey Wilson after a first-round bye. Then, Frantz reeled off five straight pins. For third-place, he defeated Derby’s Tyler Allen, 4-2. Frantz is ranked second at 195.

Shields earns Norton wrestler of the week; key 3-2-1A performances

Legendary Norton coach Bill Johnson has long named a team wrestler of the week. At 106 pounds, Darius Shields (20-5) took fifth with a long run on the backside of the bracket. After a bye, Shields lost his first match.

Then, Shields captured four straight victories: 5-4, a 52-second fall, 5-2 and a 5-3 sudden victory. In the consolation semifinals, he fell to Seneca’s Brady Roark, 10-0. Roark is 20-1. Then, Shields won by fall in 2:30 against Washburn Rural’s Jacob Tangpricha for fifth.

Eureka is the defending 3-2-1A state champion. Brennan Lowe (24-1) finished third and had his first loss of the season. In the quarterfinals, he fell 8-2 to Winfield’s Chance Price. Brent Escareno (15-6) was seventh at 160.

Shields is ranked second at 106 again, while Escareno was sixth at 160, but dropped out of the latest rankings.

St. Thomas Aquinas tied out-of-state Underwood with 162 points for title at the 23-team Bobcat Classic. Mill Valley is third at 149 with St. James Academy fourth at 117.5. Johnny Akin (20-5) earned the win at 138 with a 5-3 decision against Mill Valley’s Carson Dulitz.

Simma and Santa Fe Trail’s Evan Dean led the tournament with seven pins. At 285, Evan Dean (26-0) won all three matches in 63 seconds or less. He is ranked second in 4A.

At 195, Tommy Carroll (20-1) had back-to-back byes to open the tournament, and then won three straight victories by fall. In the championship, Carroll defeated Basehor-Linwood’s Josh Willcutt, 8-1. Danny Carroll (11-1) earned third at 285. Tommy Carroll bumped a spot from fifth to fourth, and Danny Carroll stayed fourth.

Mill Valley remained first in the 6A team standings. However, the rest of the top-10 went through some changes. Last week, Washburn Rural, Garden City, Olathe South, Dodge City, Derby, Olathe North, Manhattan, Wichita West and Gardner-Edgerton were the top-10 behind MV.

Dulitz lost to Aquinas’ Johnny Akin, and Keal fell to Underwood’s Nick Hamilton, a 36-0 wrestler. Brodie Scott (21-3) earned the title at 170, and is ranked second behind Karibo.

Mill Valley’s Ethan Kremer (16-4) had injury default in the tournament. Kremer, the Sports in Kansas 5A Defensive Player of the Year in the fall, won his first match by fall and then had a bye. Then, he injury defaulted his next two matches. Kremer remains first in 6A.

St. James’ Cade Lautt improved to 24-1 with an incredibly dominant tournament. After a bye, Lautt won four matches in a combined 82 seconds. In the semifinals, Lautt beat Rossville’s Kody Davoren (No. 3 3-2-1A) by technical fall.

At 101, Fort Scott’s Rylee Cagle improved to 11-0 and defeated Emporia’s Azia Obergon in the finals.

Paola junior Jordyn Knecht improved to 14-0 and remained first in the classification at 123. Gardner-Edgerton’s Jaidyn Andrews was second. At 130, Spring Hill’s Courtney Costain (12-1) was first, and Washburn Rural’s Samantha Houser was second.

Washburn Rural junior Rebekah Smith (18-1) defeated Fort Scott junior Mersadie Roof by fall in 41 seconds for the 170-pound final. Roof had her first loss of the year with a 10-1 record. Smith is ranked sixth at 170.

Junction City senior Elisa Robinson, who has been No. 1 nationally, won at 191 with another dominant run. She is 18-0 and won by fall in 58 seconds in the championship. Washburn Rural junior Dajia Anderson (17-1) earned the crown at 235.

Pratt collected a title at the 11-team Clearwater tournament with 220 points, ahead of Mulvane (207.5) and Concordia (206.5). Pratt remained ninth in the 4A rankings.

Hunter Huber (16-4) placed first at 195, including a 3-2 victory versus Smoky Valley’s Tanner Lutting in the finals. Huber is ranked sixth at 195.

Nickerson freshman Gavin Moore earned third at Pratt with a 17-3 mark. He won three straight to open his tournament. His sister, nationally ranked Nichole Moore, continued to wrestle a significant number of boy matches. Moore is 8-5 against boys and took fourth. Moore continues to rank first at 116.

At 109, Lakin’s Isabelle Ortiz is second, followed by Hays’ Sarah Zimmerman and Pratt’s Jadyn Thompson. They finished 1-2-3 at the tournament.

The 130 bracket featured three ranked wrestlers with Great Bend’s Breanna Ridgeway, Hoxie’s Marissa Porsch and Garden City’s Anjelina Serrano. Porsch dropped down to 130 from 136. Ridgeway defeated Porsch by fall in 1:33 in the finals, and Serrano took third. In the last poll, Ridgeway is first, Serrano fourth and Porsch sixth at 136.

On Jan. 21, Ridgeway remained first, Serrano fourth and Porsch moved to fifth at 130.

At 136, Great Bend’s Lexi Deines took first. At 143, Pratt’s Livia Swift defeated WaKeeney-Trego’s Sydney Boyle, 4-2, in sudden victory for the title. Swift was unranked, and Boyle was third at 143 in previous rankings.

Swift is now third, Boyle fourth in the Jan. 21 poll.

At 155, Dodge City again had two teammates battle for first with Ashley Arroyo besting Jolette Armarez, 4-2. Neither is ranked.

At 170, No. 1-ranked Ava Mull of Larned dominated with a win by fall in 28 seconds. At 191, Buhler’s Emilie Schweizer was first, and Salina Central’s Renekah Franklin earned the title at 235.