Republic County had a solid first part of the season. 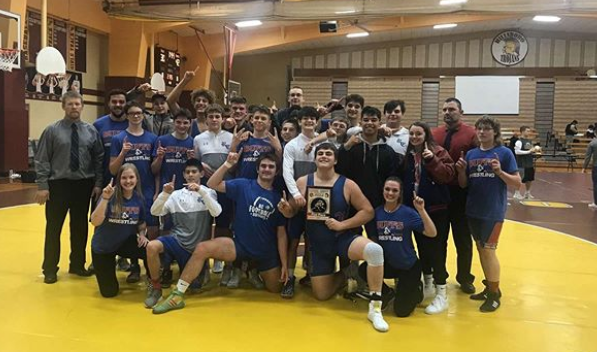 Class 6A: Mill Valley to No. 1, competes well at KC Stampede

Mill Valley jumped from fourth to first in Class 6A from the Dec. 16 to Dec. 30 rankings. MV went to the Kansas City Stampede, Missouri’s toughest in-season tournament, on Dec. 20 and 21. The tournament had 50 teams.

Mill Valley coach Travis Keal, the only coach in program history, posted via Twitter: “Very proud of this group for the toughness and grit they showed at the 50 Team KC Stampede this weekend. The team finished 13th and made big gains this weekend.”

Zach Keal took second at 126, while Kremer was second at 285. Austin Keal, a Little Rock signing, finished eighth at 145. Coach Keal also posted that he is “enjoying my last year in the Dad/Coach role with my boys. Both boys had a great weekend.”

Washburn Rural ranked second in 6A, wins BC tournament

Washburn Rural, which moved from first to second in 6A, won the Dec. 21 Bishop Carroll tournament with 161.5 points, 12 ahead of Andale. Dodge City, up two spots to fifth in 6A, was third with 149 points. Rural senior Bishop Murray is ranked first at 113.

Murray is 10-3 this season and opened the tournament with three big wins, a pair of falls and a technical fall victory. However, Murray medical forfeited his final two matches.

Saunders is the defending state champion at 170 pounds after he went 30-1 last winter.

While the other new class rankings came out either Dec. 30 or Dec. 31, 5A released its latest rankings Dec. 24. Maize and Goddard remained first and second, respectively. Blue Valley Southwest, Great Bend and McPherson was third through fourth.

In the Dec. 17 poll, Great Bend was third, BVSW fourth and McPherson fifth.

Many of the Kansas City area teams went to the Johnson County Classic on Dec. 20-21. Blue Valley Southwest won the 19-team tournament with 540.5 points, well ahead of second place Olathe South (488.5). Sophomore Hayden Mills, ranked first at 113, improved to 19-2 and won the title. He defeated St. Thomas Aquinas’ Zak Kalafut by major decision in the championship.

Also at 170, Seth Nitzel (18-0) is ranked first and won a title. He won his first five matches by fall in three minutes or less. In the championship, he defeated Olathe South’s Zack Leskovac by major decision. At 182, Jackson McCall (20-3) is ranked third – and placed third.

BVSW’s Hubbel into rankings; defeats 6A ranked Younggren and Lister

At 220, junior Mack Hubbel has enjoyed a surprising season. Hubbel was unranked and then moved to fourth. He is 18-1. Hubbel went 6-0 at the tournament. His first four wins came by fall.

In Class 6A, Younggren is ranked fourth and Lister first.

Danny Carroll jumped into the rankings at fourth in 5A. In the final, he defeated St. James’ Harry Spencer by fall in 4:27. Spencer was ranked fourth and moved to fifth.

Class 4A: Andale and Chanute switch places at the top

Andale had another a big move from freshman A.J. Furnish at 120. He leaped from sixth to second. Junior Hector Serratos remained first at 126. Senior Dawson Chavez stayed second at 152, and junior Eli Aouad stayed at fourth at 160. Senior Cayden Winter was unranked and is now fifth at 220.

Andale had a strong showing at the Dec. 21 Bishop Carroll Invitational, which helped with the rankings changes. In the 15-team tournament, Washburn Rural won with 161.5 points. Andale was second with 149.5 points. Dodge City took third at 149, and BC was fourth at 107.

Furnish (11-4) went 5-0 with three victories by fall, a technical fall, and a major decision to earn the 120 title. In the final, he defeated Washburn Rural’s Caleb Douglas in 1:33.

Class 3-2-1A: Slight changes in the Dec. 30 rankings; Pedigo among those who move a class

Class 3-2-1A had a couple of adjustments in the top-10 in the Dec. 17 to Dec. 30 rankings. Hoxie, Beloit, Norton and Goodland remained in the top-four. Hoisington and Phillipsburg flipped spots at fifth and sixth, respectively. As well, Riverside replaced defending state champion Eureka at No. 10.

Riverside features seniors Beau and Luke Horn. Beau is ranked second at 138, and Luke is third at 152. Beau remained in the same position from the Dec. 17 ranking, and Luke improved a spot.

Larned sophomore Dillen Hook and Republic County sophomore Jonathan Dyke are fifth and sixth, respectively, at 113. Neither was ranked Dec. 17.

Weight class 120 had a new No. 1 with Jayhawk Linn senior Brody White moving from 120 to 126. He was 120 and is now second at 126 behind Phillipsburg senior Jacob Sisson. Smith Center senior Colton Shoemaker improved from second to first at 120. Hoxie freshman Drew Bretz took a big jump from unranked to second.

Class 138 had some changes at the back end of the rankings, notably Larned junior Braydon Lemuz moving from unranked to fourth.

Fredonia senior Matt Weilert opened the season first at 145 and then was ranked at 152 in the last two polls. Weilert is again back to 145 and is ranked No. 1. Kingman sophomore Colby Schreiner went from first to second behind Weilert.

Ellis sophomore Mason Gottschalk and Fredonia junior Buddy Claiborn came into the rankings at fifth and sixth at 170.

As well, Hoisington senior Wyatt Pedigo – a North Dakota football signee and two-time Class 3-2-1A wrestling champion – has moved back down to 195. He is ranked first at 195 after he was first at 220. Osage City junior Dane Whalen switched from second to first at 220.

On Dec. 19, Republic County and Beloit met in a dual. Beloit won 39-28. Johnson, Brennan Walker, Hunter Prochaska and Braden Burks are all undefeated. Walker is ranked first again at 182. Prochaska was not ranked at 152 and moved to fourth Dec. 30. Sophomore Tate Kadel remains third at 145.

At the Marion County duals on Dec. 21, Republic County defeated Marion, 60-6 and beat Riley County, 66-9. As well, RC beat Wellington, 60-24. In the semifinals, RC beat Clay Center, 54-29. Zimmerman won by fall in 56 seconds against Clay Center’s Logan McDonald. He is ranked fourth in 4A. In the finals, RC defeated Burlington, 38-37, which featured Cael Johnson, ranked first in 4A at 160.

RC’s Kaleb Talkington, who is ranked fourth at 126, won by fall in 49 seconds. Johnson won his match in 56 seconds. Zimmerman helped to seal the win with a victory by fall in 18 seconds.

Bell and Johnson continue to rank third, and Weimer stayed first. Baalman bumped from third to second at 152.

Steinert is into the rankings at sixth.

McPherson, Great Bend and Nickerson continue to hold down the top-three rankings for the girls. KSHSAA also realized the girls’ postseason information. This is the first year of girls’ wrestling as a KSHSAA sanctioned sport.

The competition will have two regionals: McPherson and Paola. KSHSAA lists 150 schools having girls’ wrestling. The all-classes meet will be Feb. 27 at the Tony’s Pizza Events Center in Salina.

Hoxie’s Marissa Porsch improved to 11-1 with two wins by fall against Hugoton’s Suheila Rosas at the Goodland tournament. Ashlyn Kaus (7-5) placed third in the 143/155 division. Porsch is again ranked sixth at 136.

At the Hoisington tournament, Concordia’s Kassidy Leiszler earned the title with Great Bend’s Breckyn Elliott second at 101. Leiszler and Elliott are both 8-3.

Leiszler and Elliott are again ranked first and third at 101.

At 109, Holcomb’s Amilia Martinez earned the championship, and Stafford’s Daisy Rayburn finished second. Martinez stands at 9-2, and Rayburn is 6-4. Martinez jumped into the rankings at No. 3.

Eureka’s Sierra Miller defeated Hoisington’s Kiana Grandclair by fall in four minutes in the 116 final. Miller is 9-2, and Grandclair stands at 6-1.

Also at 130, Great Bend’s Breanna Ridgeway (9-0) earned the championship. GB’s Marissa Hanrahan captured the 143 title. Larned’s Ava Mull (8-0) won at 170. Great Bend’s Kyeal Mogbo earned the crown at 191. Ridgeway and Mull continue to be ranked No. 1 at its classification.