v Faces in KS: Grace Pyle - Sports in Kansas 
Warning: include(../includes/bodytag.php): failed to open stream: No such file or directory in /home/kansass/public_html/ks/news/index.php on line 36 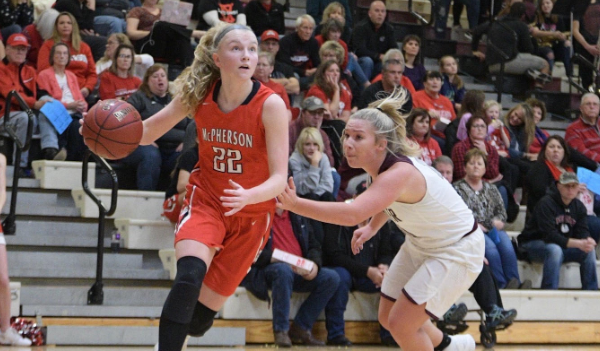 McPherson, to many in Kansas, is considered to be the high school basketball capital of Kansas. There is so much basketball history and tradition in this Central Kansas community of around 13,000 people that it almost sounds made up. McPherson never rebuilds as they always seem to reload with talented girls and boys basketball teams that compete for state titles every year. There's no big cities around or big talent pools to immediately pick from like most populated 5A areas that its easy to transfer to/from, yes Wichita is an hour and Salina is around 40 minutes, but  that's likely what makes this community so special with all the success that they've had in this small Kansas town.  Kids, boys or girls, grow up wanting to be on state championship McPherson basketball teams and play in the famous one of a kind Roundhouse.

It’s no different this year as the Bullpups feature one of the top juniors in the entire state of Kansas in 5-foot-10 combo guard Grace Pyle. Yes, it’s the same Pyle last name that has produced two Mr. Kansas Basketball Awards in recent memory in her older brothers, Ben and Drew. Ben is having a very successful career at Western Illinois as a sophomore and was leading the country in free throw percentage at one point earlier this season, he was the Sports in Kansas All-Classes POY just two seasons ago. Grace is the only girl in the Pyle family, besides her mom of course, as she has three older brothers and one younger brother. It’s safe to say she knows basketball as she has been around it from her brothers her entire life.  But enough on her brothers stardom, it’s now time for another Pyle to shine and this time on the girl’s side.

Grace had a breakout year last year in which she scored 11 points per game, six rebounds and two assists per game. She was the teams leading scorer and rebounder on a very balanced McPherson attack. It’s led to her picking up Division I offers from Wichita State and the University of Texas-Rio Grande. Pyle earned SIK all-state honors last season as her team finished fourth in the state, one year after replacing the great Taylor Robertson and a state title in 2018. Robertson now doing big things at Oklahoma as a sophomore as one of the best three-point shooters in the country. Pyle had a 21-point performance to give the Pups a win in the quarterfinal at state last year over Seaman (57-41).

Pyle will look to be one of the premier players in the state this season and is off to that start so far in 2019-2020. She is averaging 17 points per game, 7.5 rebounds per game and 4.5 assists per game. She nearly had a triple double in a game earlier this season and also had a career-high 27 points (six three pointers) against Buhler. Pyle has one of the most complete stat lines in the state.  She’s a very versatile player that can do a lot of good things with great length.

Pyle also gets it done in the classroom with a 3.9 GPA. History is her favorite subject. She plans on playing basketball at the next level but is undecided on where that will be.

McPherson is by far from having just Pyle, they are loaded. McPherson has a very balanced effort that also features junior Kassidy Beam (14.3 ppg) and returning starters senior Lakyn Schieferecke and senior Emma Ruddle. Plus, Mac features senior Cassie Cooks, senior Andrea Sweat and junior Emma Balm forming one of the best teams in the state, currently ranked #2 in 5A by the KBCA.

The Bullpups are led by one of the best coaches in Kansas in Chris Strathman who has three state titles as a head coach for Mac. The school has produced nine girls state basketball titles, with the latest coming in 2018 in an incredible comeback over Bishop Miege. Mac has played in 15 state titles on the girl’s side with 32 appearances, 22 of them being final fours. McPherson has also produced three Miss Kansas Basketball winners in Ashley Sweat (2006), Katelyn Loecker (2013) and Taylor Robertson (2018). That is the most among any school in Kansas along with Little River who had three.

McPherson is off to a 5-0 start at the break including an impressive victory over Andover Central in OT and 6A Derby. McPherson’s average margin of victory over is by 25 points over their first five contest while they are scoring 59 points per game and limiting opponents to 34. They are back in action with Dodge City on Friday at home. DC has turned some heads this year and currently ranked 9th in 6A.

We caught up with the outstanding student athlete below in the latest Q&A edition of Faces in Kansas.

This feature is presented by McPherson High School Athletic Department. Proud to support coverage with Sports in Kansas. Best of luck to all McPherson teams this school year.

Same goals we have every year at McPherson. Win the league, win the Mid America Classic, win Substate, win a State Championship.

We return a lot of key players. We have put a lot of work in the off season. We have good chemistry. I would say definitely yes.

I like to think I make the right play at the right time. I have good court vision. I compete hard every play. I have a “do what it takes” mentality whether that’s defense, rebound, find the hot hand, or score. I don't care how we get the win as long as we get the win.

It's the best place to play in the state of Kansas, for sure. It's hard to describe the atmosphere of the Roundhouse unless you've seen it or experienced it. Loyal, passionate fans, great student section, and a loud band. There's nothing like running out of the tunnel into the Roundhouse.

The Roundhouse is a basketball icon. At McPherson, we play pretty good team basketball. So if you like watching that, and you like a loud and energetic atmosphere, then you should make the trip.

We have 4 returning seniors (Cooks, Ruddle, Schieferecke, and Sweat) and 2 other juniors besides me (Beam and Malm) and some underclassmen that will step up and play some pretty big roles this year.

The relationships I have built with my teammates and coaches that I’ve had over the years. The lessons that I've learned that will help me later on in life. Sports give you lifelong friendships.

I throw the shot and javelin in track

Coach Strathman has been coaching at McPherson for a long time. He is intense and detail oriented. There are no surprises. You know what the expectations are when you play for McPherson High School.

We played summer league, played in a few MAYB tournaments, went to Pitt State Camp as a team, and most of us play with some kind of AAU organization as well.

I have some offers and interest from D1 and D2 schools. The goal is to have fun while I'm playing and to get my college paid for.

Being with my friends and building relationships that will help us on the court.

I'm not sure, but hopefully being successful at whatever I'm passionate about in 10 years

History is my favorite subject. I'd like to say I'm an A student (I am most of the time). 3.9 GPA

My Grandma. Watching her over the years taught me that hard work can take you anywhere you want to go in life.  She has also been one of my greatest supporters throughout my life.

I have 3 older  brothers and 1 younger brother. I’m the only girl. 2 of my older brothers were Mr. Kansas Basketball.