Chris Schmidt of Olpe boys got his 400th win at the Yates Center Tournament. 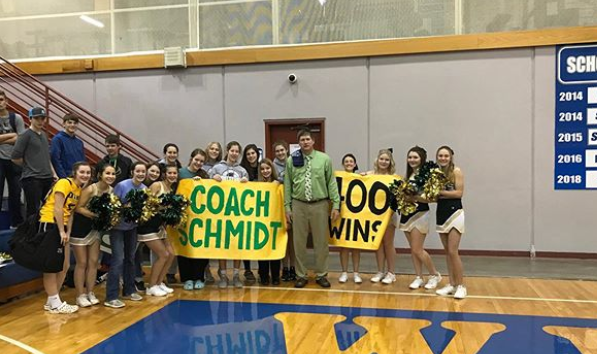 Topeka High girls continued to rank No. 1 in 6A with a 79-23 victory against Junction City. The Trojans get Topeka Hayden and Washburn Rural (No. 7 in 6A) this week. Rural is the defending state champion. Topeka is 3-0 behind 22 points, 5.7 rebounds and 2.7 assists per contest from freshman Kiki Smith. Sophomore forward Nijaree Canady has 17.7 points and eight rebounds a fame.

Liberal girls bumped from No. 5 to No. 2 in 6A after its long road trip east to Olathe West last Friday and its 55-37 win versus a quality team that includes talented junior Bailey Collar. Liberal is well-known for its Division I duo of Katie Horyna and Machia Mullens, but the Redskins controlled the game from the start. Liberal was plus-22 on the glass, held Olathe West to 33 percent shooting and had strong games from its supporting cast of Bree Horyna and Ashley Carrillo.

Dodge City girls moved to No. 10 in 6A is 3-0 after a 50-47 overtime victory versus Maize, which dropped from third to seventh in 5A. DC was 9-13 last season. Kisa Unruh scored 26 points in the contest, including all of the Red Demons' overtime points. Sydney Holmes paced Maize with 14 points.

McPherson girls' coach Chris Strathman has led the Bullpups for 15 years. McPherson is ranked No. 2 in 5A. The Bullpups have three starters out:  Emma Ruddle, Lakyn Schieferecke and Andrea Sweat. The trio has all signed to play college basketball in Division II. Sweat is out for the year with a knee injury. However, McPherson, led by Grace Pyle and Kassidy Beam, defeated Derby, 47-35. The Panthers dropped four spots to No. 8 in 6A. On Twitter, Strathman posted it may have been the most rewarding regular season victory in his tenure.

Salina Central girls continue to make a big climb up the rankings. SC was unranked and jumped to fifth last week and then third this week. Salina Central has defeated Goddard (46-40) and Great Bend (69-27). Eighty-five percent of the team's points have come from non-seniors. Sophomore Aubrie Kierscht is at 18.5 points and 2.5 rebounds.

Bishop Miege girls remained No. 1 in 4A. The Stags have long scheduled challenging games, including the Fort Smith (Ark.) Tournament of Champions for the second straight year. Miege girls are 3-1 with a 58-31 season-opening road win versus St. Joseph (Mo.) Central. At the tournament, the Stags opened with a 74-15 victory versus Southside (Ark.) and a 92-56 win against Greenwood (Ark.). The Stags lost 72-45 to Classen SAS from Oklahoma City in the championship game. Classen is 6-2 this year and 27-5, 28-3, 23-4 and 28-3 in the previous four years.

Parsons boys are ranked No. 3 in 4A and get Pittsburg, unranked in 5A, in a big Southeast Kansas League game Tuesday. Parsons senior Dariq Williams has averaged 10 assists a contest in the 4-0 start.

Clearwater girls have moved into the Class 4A rankings at No. 9. The Indians, which get Andale (No. 6 in 4A) on Tuesday, have posted a 2-0 start with a 49-37 road win versus Labette County and 60-45 versus Winfield. Last year, Clearwater went 2-19, including losses to Labette County (53-18) and Winfield (51-38) to open the year. The Indians ended the season on a nine-game losing streak.

Wellington boys finished as runner-up in the Cheney tournament. Wellington defeated Chaparral, 53-47, and Pratt, 54-41. However, the Crusaders fell to Cheney, 51-32. Wellington's Tanner Meyer delivered a big dunk in the third quarter that Hudl featured as the No. 1 dunk for the “Top Five Epic Dunks in Kansas for Dec. 8, 2019.”

In a rankings oddity, Nemaha Central girls defeated Royal Valley, 74-16, to improve to 3-0. NC, though, remained No. 3 in 3A, while Royal Valley and Cheney held down the top-two spots. RV's coach Kyle Porter is now at Hays High, and RV  suffered huge personnel losses from the 3A state title team last winter.

Cheney girls remained No. 2 in 3A and 4-0 with all wins by at least 24 points. The Cardinals are at Wichita Trinity on Tuesday and Sterling on Friday in a pair of big games. Trinity has Austin Broadie (Washburn volleyball/basketball commit) and Sterling is ranked No. 2 in 2A. Reigning 3A Player of the Year Kylie Scheer has enjoyed a big season for Cheney, but guard Lexi Cline was the team's player of the game in the last contest, a win versus Chaparral.

Scheer, a junior, is at 22.5 points and five rebounds a game. Cline has four points, 4.3 assists, 3.5 rebounds and three steals a contest. Sophomore Brooklyn Wewe has 14 points and four assists a contest.

Beloit boys, the defending state runner-up to Girard, is 3-0 and moved from No. 2 to No. 1 to replace Wichita Collegiate. Four players, all seniors, average double figures: Bryce Mason has 16.7 points and 9.7 rebounds a contest, Carson Cox has 15 points a game, Palen averages 14 points, and Hudson Gray has 10.3 points and 10 rebounds a game.

The Larned boys earned its first Gene Keady Classic in 13 years. Larned, which reached state for the first time since 1996 last winter, defeated St. John, 36-32, in the Keady championship game at Larned Middle School. Larned three-sport standout Mason Perez has started for multiple years in football, basketball and baseball. Perez suffered a season-ending injury in football. However, Perez has returned and earned tournament MVP. Larned was 2-18 against St. John in the previous 20 contests and had lost 18 in a row.

Larned (4-0) has turned over every team at least 20 times, including 22 in the St. John victory. Perez and Larned senior Chance Sanger each tallied 13 points. St. John was ranked No. 1 in 1A and was the 1A runner-up. St. John standout 6-foot-7 Tanner Halling had 17 points, eight rebounds and four blocks. Larned has remained fourth in 3A.

Columbus boys remains unranked in 3A, though won the St. Paul tournament last weekend. Patrick Cassidy is averaging 28 points per contest and had 92 total points in the three contests.

Hesston girls were No. 7 in 3A last week and dropped out this week. However, senior Elise Kaiser, a Newman commit, has cleared 1,000 career points.

Colby girls defeated rival Goodland, 41-24, to win the Topside Tipoff. Colby won the tournament for the first time since 2007, according to broadcaster Ross Volkmer.

In a Mid-Continent League matchup, Plainville boys improved from No. 6 to No. 2 in 2A after a 60-57 overtime win versus Phillipsburg in the final of the Amos Morris Classic in Russell. Plainville led 26-4 after the first quarter.

Plainville three-sport standout Jared Casey fought through several health obstacles, including a banged up knee, ankle, pinched nerve and played without protection on his hand for the first time. Casey had hurt his hand in football and played with significant wrap for most of the fall. As well, Casey committed to Kansas football this week via his Twitter. Casey was a great fullback and the 1A Defensive Player of the Year at linebacker this fall. The Cardinals are 4-0 on the hardwood.

WaKeeney-Trego girls and Ness City boys each earned back-to-back titles in the Purple and Golden tournament in WaKeeney. The Golden Eagle girls, 4-0 and ranked No. 4 in 2A, were the favorite entering the tournament, and defeated Oakley for the second straight season in the finals. Trego required a comeback in the second half versus Victoria in the semifinals. The Golden Eagles are known for their excellent half-court pack line defense, and held the Knights without a made field goal for more than 18 minutes. Versus Oakley – a team that was 3-0 entering the championship – the Golden Eagles extended their defense and opened with an 11-0 run and earned a 50-38 victory. WaKeeney-Trego is known for junior Lili Shubert and senior Libby Frost, who combined for 25 points in the title game.
Frost also delivered strong defense versus Oakley standout Jordyn Lowrie, who finished with 15 points and three blocks. However, the Golden Eagles' supporting cast played well. Sophomore Madison Walt, wearing a mask to protect a broken nose she suffered in the fall Powder Puff football game, had 20 points in the Victoria win. Junior Tillie Malinowsky missed past of last year with a concussion. She has delivered great energy and collected for 21 points and 15 rebounds in the semifinals and finals combined. WaKeeney was a collective plus-21 on the glass in the semifinals and finals.

In Quinter, Ellis boys beat Hoxie, 67-65, to win the Castle Rock Classic. Ellis won on a buzzer-beater. Last week, Hoxie was No. 5 in 2A, and Ellis No. 8 in 2A. This week, Ellis elevated to fifth and Hoxie is seventh. Ellis is 4-0 with also a 54-40 season-opening win versus Phillipsburg. Coach Mark Eck has elevated a solid program. Ellis is 21-6 in the first two years with Eck. Ellis is headed for its sixth straight winning  season, and eighth in the nine winters.

Spearville remained No. 5 in Class 2A girls the last two weeks and won the Keady Classic in Larned. Against Bucklin in the championship, the Royal Lancers opened with a 15-4 margin in the first quarter and won 52-43. Senior Brianna Ede delivered 21 points on 9 of 13 field goals and 14 rebounds. Junior Alissa Heskamp had 17 points, and senior Ehlaina Hartman, an Emporia State commit, delivered eight points. Ede's season-bests last season were 17 points in a win versus Satanta, and 11 rebounds against Bucklin.

Belle Plaine boys moved from No. 7 to No. 3 in 2A. Eli Wiseman and Austin Hilton lead the Dragons into the Heart of America/Central Plains League challenge this weekend.

Stanton County girls, a state qualifier last year, moved to No. 8 in 2A. The Trojans are 4-0 with three wins in the Border War Basketball Tournament. SC has won every game by at least 13 points. SC has permitted just 30 points a contest.

Central Plains girls pushed its all-time winning streak to 115 straight games with an Amos Morris tournament championship in Russell. In the semifinals, CP elected not to run its press against Phillipsburg freshman Taryn Sides and her excellent ball handling. The Oilers won 57-37, which was the closest game since March 2018. Central Plains, though, led a quality Beloit/St. John's-Tipton, 48-4, at halftime and won 62-11 in the finals.

Lebo took over the top spot in 1A boys as St. John dropped to sixth. The Wolves are 3-0 with big victories against Flinthills (74-25), Rural Vista (47-32) and Wichita Classical (54-26). Lebo was previously ranked third in the poll. Little River, formerly the No. 2 squad in 1A, has dropped out of the poll.

Caldwell boys took a big jump from No. 10 to fifth. The Blue Jays rolled through its home Border Queen tournament. Caldwell defeated Norwich (44-35), Central (59-36) and Argonia (49-18). Caldwell is 4-0 with great balance. The Bluejays have five players with between 6.3 and 8.8 points per game, led by senior La Thompson. Caldwell has seven seniors and nine players between six-foot and 6-2. Norwich won the girls' side of the Border Queen.

Ness City boys, the defending 2A state champion, graduated its three excellent seniors with 2A Player of the Year John Pfannenstiel, Andres Rios and Landon Reinhardt. However, the Eagles are 4-0 and moved to No. 8 in 1A. The Eagles defeated Hodgeman County, 53-49, in the championship. Sophomore forward Taylor Cable is one of the state's top breakout players with 20.8 points and 8.5 rebounds.

Olpe head coach Chris Schmidt got his 400th career win in his career for basketball at the Yates Center Tournament. Schmidt, who is also one of the top football coaches in Kansas, has over 100 wins in football and a state title (2014)