v Faces in KS: Patrick Cassidy - Sports in Kansas 
Warning: include(../includes/bodytag.php): failed to open stream: No such file or directory in /home/kansass/public_html/ks/news/index.php on line 36 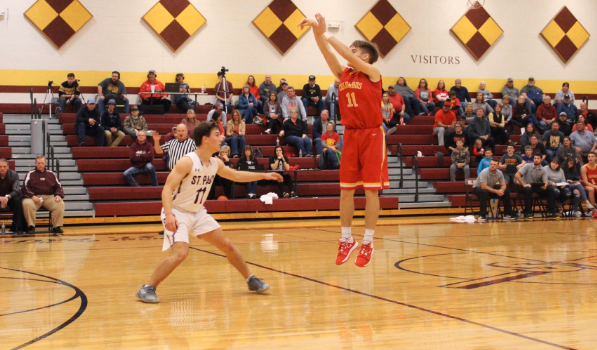 Columbus senior Patrick Cassidy is one of the top multiple sport athletes in the Southeast Kansas area. Cassidy has put his name on the map over the last couple of seasons as one of the rising basketball players in Class 3A and the CNC league.

Cassidy, a 6-foot-0, 165-pound, senior, point guard, is coming off a 92-point tournament performance over three games at the St. Paul Tournament to open the 2019-2020 season as the Titans went 3-0 to win it. One of those games, he racked up a career high 39 points. On the season, he is averaging 28 points per game as the team is off to a 3-1 start.  Cassidy, who has unlimited range as a shooter, averaged 18.2 points per game as a junior last season on his way to earning Sports in Kansas 2nd Team All-State honors in the loaded 3A classification. He also averaged over 14 points per game as a sophomore back in 2017-2018. Cassidy is at 826 points and the way the season is going could get that 1000-point milestone pretty fast this season.

While he may have been known to area or statewide media last season as just a basketball player, that isn’t quite the case for 2019-2020. Cassidy had a breakout senior football season as the Titan quarterback in which CUHS saw a turnaround from 1-8 in 2018 to 8-2 in 2019. He earned several all-state honors as a first team punter or honorable mention all-state quarterback after racking up over 1,500 combined yards of offense and 25 touchdowns. The Titans, under first year head coach Blake Burns, saw huge years from several all-league players in addition to Cassidy including Clay Saporito, Gabe Martin, Grayson Walden, Alex Bole, Kody Schalk, Jaxon Hauraughty and Kaden Crain. It was a rare down year (1-8) in 2018 for the program that had saw so much success prior with Dan Grundy but Cassidy and company help put the program back on the map for 2019.

Cassidy, who is also a key member of the baseball team, is known to be an outstanding golfer (2 handicap) to many around the Southeast Kansas area despite not competing in it at the high school level. He would likely be one of the known golfers in 3A if the golf and baseball season didn’t run at the same time during the school year.

Cassidy also gets it done in the classroom at CUHS. He has a perfect 4.0 GPA and his favorite subject in school is Physics.

Columbus, known as a wrestling town to many over the course of time, has had some success in the sport of basketball with 10 state tournament appearances. However, a lot of it hasn’t come in a long time. Columbus hasn’t been to a state tournament in boys’ basketball since 1995 when the team, then 4A, led by all-state players L. Dee Murdock and Beau Sarwinski. Murdock would go on to play for the Missouri Tigers and Illinois State Redbirds. Mike Sarwinski was the school’s all-time leader in scoring before Murdock and starred at the school in the early 90s. Marc Eddington went on to be first NCAA Division II All-American at Pittsburg State in 1997 after walking on to the program. Kevin Tarter (1989) also scored over 1,000 points at Columbus.

The Titans, led by head basketball coach Jerry Smiley, are off to a hot start in 2019-2020 and will look to be one of the key teams to watch in Southeast Kansas 3A basketball this season after. Columbus won just two games combined in Cassidy’s freshman and sophomore year as that jumped to nine wins last year. The team should be one of the most improved teams in 3A basketball over the last two seasons. Columbus girls, led by head coach K.C. Youngblood and his daughter Karsyn, are also a team to watch in 3A as they also won the St. Paul Tournament after qualifying for the 3A state tournament last year.  We caught up with the outstanding senior athlete below in the latest Q&A edition of Faces in Kansas.

This feature Is presented by H&K Camper Sales and Labette Bank of Columbus.

H&K Camper Sales is a proud supporter of Columbus Athletics. Best of luck to Patrick and his teammates this season.

I got involved with basketball and sports at a very young age. I can remember shooting baskets on my little tikes basketball goal in my house with my dad. We had some pretty intense games on our mini hoop.

This season has lots of potential. My goals for the year would become a team player and a leader for the other guys on the team. A team goal would be being competitive in every single game this season and being able to finish games. Our league is tough and you have to bring your game each and every night.

I feel like our team has a shot to make a run this year. If we get the chemistry between all of us together and really make sure we are playing for one another I feel as if we can be a threat.

I think my ability to shoot the ball from anywhere past half-court would be what makes me a force. I also feel as if my driving and attacking game has much improved in the past year.

Our town is very special. The support we get from our classmates and our community is amazing. Just like in the football games we get a pretty good crowd and they always make sure that they are loud. I can’t give our town and school enough credit for the support and energy they give us.

Our group of seniors is unlike any other. We are all really great friends and make sure that each of us are held accountable for everything we do. I feel as if we have one of the best, if not the best, bonds in a senior class that has ever been through Columbus. This allows us to play well as a team, because we aren’t worried about individual stats it's all about the team. We love to play with energy and we like to play a little scrappy.

Some of the key players on our team are the other three senior starters. First, Austin Hosier, he is a good defender and can finish at the rim. He brings good energy to the defensive side of the court. Second, Clay Saporito, he can finish around the rim and brings good leadership to the team. He has good size and can knock down shots from outside if left open. Lastly, Grayson Walden, he brings a spark to our team and really brings good energy whether he is in or not. He can score the ball in every fashion and really makes the games and practices enjoyable. He is a fun guy to play with.

Of course you have the cliche answer of playing with your friends and making memories on the court with them. That is true and it is a great part of basketball, but my favorite part is the competitiveness and how intense games can get. Basketball is a sport where if you don’t show up ready to play anyone can beat you.

I do play other sports. I play football, baseball, and golf. I was the quarterback and punter for the football team. I enjoyed every moment of football and I will miss not being able to play again. Coach Burns really put together a great season this past year and I can’t thank him and the other coaches enough for leading us to a great season. In baseball, I play shortstop, 2nd base, and also pitch. Our senior class has been growing up playing baseball since T-Ball and we all enjoy the game of baseball. Golf is tied with basketball as my favorite sport. It can be relaxing but it can also be aggravating. Golf is a mental game and is one of my favorite things to do. I hate that baseball and golf season are during the same time!

I love playing for Coach Smiley. Playing for Coach Smiley is a challenge, but it is a good challenge. We think a lot alike and are both very compatible when it comes to basketball. He forces me to be the best player I can be and also makes sure that I become a better person. I appreciate all that he has done for me and I thank him for being a great role model to me.

The team and I put in a lot of work this offseason. We did weights every morning and then did basketball and other sports the rest of the day. Our summers are full of sports and getting lots of work for every season.

My plans for the future are still up in the air. But for a temporary answer, I will attend the University of Kansas and be in the Honors Program while majoring in Management and Leadership.

My favorite thing to do when I am not playing sports is I like to go hunting and fishing. I also like to spend time with family and friends.

I see myself with a job in the business field. I want to use my leadership skills to help people and impact other people’s lives.

My favorite subject in school is Physics. I am a student that likes to stay on top of his work and likes to create discussions in the classroom. I also like to have fun with the teachers and joke around. My GPA is a 4.0.

My role model is my father. He has taught me everything I know about sports, especially basketball. He was an amazing athlete when he was in high school and I look up to what he did in his time at Columbus Unified High School.

Other than my moms food, the best place to eat is Brush Creek Golf and Grill. It is at our country club and has great service. I love going out there and seeing people I know.

One thing the average person wouldn’t know about me is that I am a pretty good dancer. I love to cut a rug especially at weddings and other special events.