v Sports in Kansas: 2019 Football Coach of the Year Honors - Sports in Kansas 
Warning: include(../includes/bodytag.php): failed to open stream: No such file or directory in /home/kansass/public_html/ks/news/index.php on line 36

Sports in Kansas: 2019 Football Coach of the Year Honors 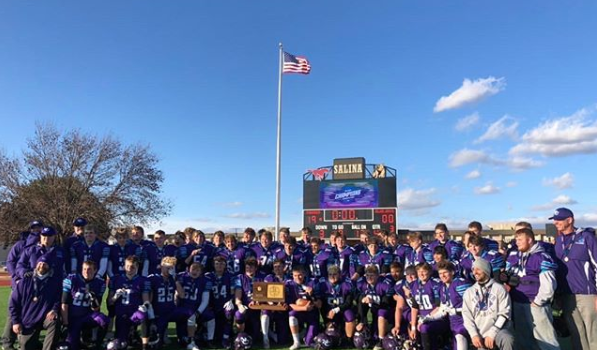 2019 Sports in Kansas All-Classes Coach of the Year: Warren Seitz, Nemaha Central (2A)

Nemaha Central entered the season ranked outside the top-5 and became a rare team that opened unranked and won a state championship. NC jumped from 5-4 to 11-2. Seitz, in his ninth year with the Thunder, made two schematic changes that he hadn't used in the past. NC went to a three-front defense before the year started. After a Week 1 loss to Sabetha, the Thunder moved to three receiver sets and virtually removed the tight end from the offense. Seitz improved to 76-21 with the Thunder. It was the first state championship in school history for football since Nemaha Valley and Baileyville B&B consolidated in 2014. Seitz played and later coached at Topeka West. He played college football at Missouri and in the NFL with the Pittsburg Steelers and New York Giants.

2019 Sports in Kansas 6A Coach of the Year: Brandon Clark, Derby

Class 6A featured a high number of ranked teams and elite talent, including Topeka's Ky Thomas, Lawrence Free State lineman Turner Corcoran and Olathe North's Arland Bruce IV. The rankings, like 3A, went through continual change throughout the weeks. However, Derby stayed metronomically consistent and captured its second straight state championship with a 13-0 mark. The Panthers have won 26 consecutive games. Like most seasons, Derby had less Division I talent than much of its 6A brethren. Lineman Alex Conn has committed to Nebraska, but center Kevin Washington, a three-year starter and Top 11 all classes player, has received Division II looks.

As well, Derby again had an injury to quarterback Grant Adler, but Lem Wash stepped in with a huge fall. Derby outscored teams, 701-155, and won the fifth title since 2013 with Clark. In the championship game, Derby defeated Olathe North, 63-26. Derby set Class 6A title game records for points (63) and total yards (674). Derby has won crowns in '13, '15, '16, '18 and '19 under Clark. This season, the Panthers had the most points in a Clark-led state title team by 76 points. It marked the second-best defense of the five title squads behind 2018 that permitted 103 points, which marked the best 6A scoring defense since '06. Derby also had a new defensive coordinator with Austin Wuthrich. He took over after Mitch Pontious took an administrative role at Derby Middle School. Clark is 130-36 in 14 years with the Panthers. Special consideration was given to Lawrence coach Steve Rampy. One of the state's legendary coaches with notable trips at Blue Valley and Pittsburg State University, Rampy led Lawrence from a 1-8 mark last fall to 8-2 this season.

2019 Sports in Kansas 5A Coach of the Year: Joel Applebee, Mill Valley

Joel Applebee won his third title in as many tries with Mill Valley after titles in '15 and '16. Applebee, 81-32 in 10 years with Mill Valley, led a team that had an average score of 34-17 in the Eastern Kansas League, the state's best conference. Mill Valley had a brand-new wide receiving corps and had strong improvement from its offensive line and on defense after a 7-4 season and 19.6 points allowed a contest last fall. Mill Valley opened 1-3, all seven point losses. That included a 28-21 defeat to St. Thomas Aquinas in Week 4. In the state semifinals, Mill Valley defeated Aquinas, 34-31, in overtime. In the championship game, MV beat Wichita Northwest, 40-31.

2019 Sports in Kansas 4A Coach of the Year: Derek Tuttle, Andover Central

Coach Tom Audley retired after 17 years with Andover Central, the only coach in program history. Derek Tuttle had served as an assistant every season  with Audley, and took over as head coach. AC went 5-5 and scored 15.7 points per game and allowed 16.8. This year, the Jaguars took a big climb to 11-2 and lost to Bishop Miege in the state title game. The Jaguars scored 28.1 points per contest and allowed 15.1 per contest. AC joined the '15 runner-up squad that also lost to Bishop Miege in the final as  the two best teams in school annals.

The Andover Central Jaguars Booster Club would like to congratulate the team on their 2019 4A State Runner-Up Finish. Congrats to Coach Tuttle on earning SIK 4A SIK COY Honors.

2019 Sports in Kansas 3A Coach of the Year: Dylan Schmidt, Andale

Andale lost in the 2017 state title game to Bishop Miege and in the state semifinals to Pratt in '18. This fall, Class 3A had 11 teams in the Kpreps top-5 poll throughout the season. Andale, similar to Derby in 6A, stayed consistent despite the rankings changes and was ranked No. 1 virtually all season. The 13-0 Indians have lost just two games in Schmidt's three years. Andale outscored teams 646-95. The Indians led 3A by a wide margin in scoring offense and finished second in scoring defense, decimal points behind leader Jefferson West.

Andale was known for its depth, battled through an early season injury to quarterback Easton Hunter, and Noah Meyer stepped in. Eli Rowland was an 1,000-yard rusher, and Mac Brand had a big season. Defensively, Andale had strong seasons from multiple players, including Rowland, Brand, Dawson Chavez, Scotti Easter and Creighton Camp.

2019 Sports in Kansas 2A Coach of the Year: Warren Seitz, Nemaha Central

Nemaha Central entered the season ranked outside the top-5 and became a rare team that opened unranked and won a state championship. NC jumped from 5-4 to 11-2. Seitz, in his ninth year with the Thunder, made two schematic changes that he hadn't used in the past. NC went to a three-front defense before the year started. After a Week 1 loss to Sabetha, the Thunder moved to three receiver sets and virtually removed the tight end from the offense. Seitz improved to 76-21 with the Thunder. Seitz played and later coached at Topeka West. He played college football at Missouri and in the NFL with the Pittsburg Steelers and New York Giants.

2019 Sports in Kansas 1A Coach of the Year: Larry Glatczak, Centralia

Centralia enjoyed a four-win improvement from 8-3 to 12-1. The Panthers lost their first game of the year to Rossville, and then won 12 straight. That included a key 54-32 Week 2 win versus Riley County, a 22-20 quarterfinal road win versus Olpe, and 18-14 against Smith Center in the finals. Centralia is 4-1 in state titles since '09 with Larry Glatczak, a Centralia alum. Glatzcak improved to 133-41 in 14 years as head coach. Centralia had an average score of 40-13 after 37-17 last season.

Hoppes, a C-G alum, built the Eagles into a state power. The Eagles went 1-8, 2-7, 4-5, 10-2 and 13-0 in the last five years. Hoppes improved to 27-7 in three seasons. Canton-Galva finished 13-0 and had a huge improvement defensively. C-G outscored opponents, 724-97, after a collective 584-266 mark last season. Canton-Galva missed standout sophomore Tyson Struber for a month, and quarterback Landon Everett hurt his shoulder in the semifinals. Hoppes and Canton-Galva, though, will be long remembered for its 66-36 state title win versus St. Francis. C-G trailed 36-0 late in the first half and scored 66 straight points, the biggest turnaround in the 51-year history of Kansas state championship games. Notably, Struber credited the coaching staff for keeping the belief.

Canton-Galva Jr/Sr High would like to congratulate the Canton-Galva Eagles on their first ever state football title. Congrats to head coach Shelby Hoppes on the 8M-I Coach of the Year.

Tiernan won a pair of state titles with Baileyville B&B, and captured a crown with Osborne in 2013. Tiernan eventually went to Solomon, and paced the Gorillas to a state  runner-up showing in '18, the best finish in school history. Then, Tiernan returned to Osborne and led the Bulldogs to a 13-0 mark. Several times, Tiernan noted that people told him that Osborne would be a seven- or eight-win team this season. However, Osborne replaced '18 Division I Offensive Player of the Year Darnell Holloway, the starting quarterback. Steele Wolters emerged with a great season at quarterback with 32 total touchdowns, along with 142 tackles and five INTs. Osborne had three seniors come back out for football, and all three were key contributors. Evan Garman led the Bulldogs with 142 tackles and Connor Goheen and Damien Rothenberger were the team's two biggest players.

Osborne is 3-1 in state championship games in the last seven years. Throughout the fall, Osborne worked on a two-front defense and used it against Axtell in the championship game. The Bulldogs held Axtell  quarterback Quinn Buessing to 13 of 25 passing to 135 yards with two touchdowns against two interceptions. Buessing had just two INTs all year before state. Osborne did not complete a pass in the title game en route to a 34-26  win versus Axtell.

Moscow's Brett Harp completed his 18th season with the Wildcats with a six-win improvement, a 10-0 record and Wild West Bowl championship victory with a 52-6 victory versus high-powered Bird City-Cheylin. Harp had never coached six-man before 2018 and learned more about the game after a 4-5 season in '18. Moscow put in a great summer in the weight room. While many six-man squads have a more wide-open style, the Wildcats controlled the clock with Gerardo Garcia, Adan Granillo and Austin Snyder. Angel Granados, Ryan Penrod, and Edwin Rojo were key players. Simon Gogniat, a foreign exchange student, provided a strong leg.