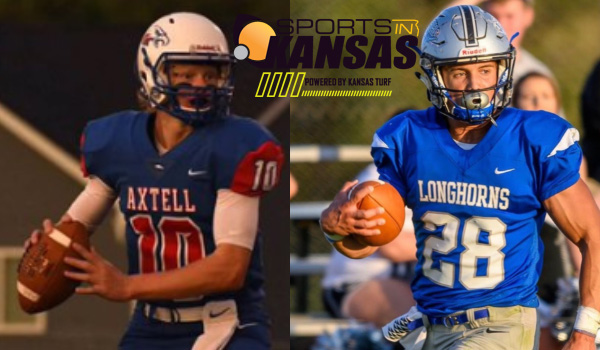 Axtell quarterback Quinn Buessing was a four-year starter and came close to a bevy of all-time eight-man offensive records. Arguably the greatest football player in Axtell history, Buessing is a four-sport all-state pick in cross country, football, basketball and track. He helped Axtell end Twin Valley League rival Hanover's 43-game winning streak, the longest in KSHSAA eight-man history. Axtell again bested Hanover in the state semifinals and advanced to the state title game for the first time since its lone crown in '93. The 6-foot-1, 187-pound Buessing completed 165 of 250 passes with 2,398 yards with a 41/4 TD/INT ratio. He rushed 118 times for 630 yards and 20 scores. Defensively, he had 59 total tackles, seven interceptions, including a pick-six, and a pair of fumble recoveries. He has offers from NAIA's Concordia University (Neb.), Benedictine, and Bethel.

Struckhoff couldn't play football as a junior after he transferred back to Thunder Ridge from Stockton. In the summer, he was expected to be a breakout player because of gaudy weight room and combine numbers. The first cousin of TR head coach Joel Struckhoff, Reece led the Longhorns to a four-win improvement, 9-2 mark and quarterfinals appearance. Struckhoff was nominated for SIK awards on both sides of the ball. TR averaged 50.7 points per game and allowed 16.2 points per contest. Last year, Thunder Ridge both scored and allowed 30 points a game. Struckhoff was one of five Longhorn players with 100 tackles. He paced with 95 solo stops and 166 total tackles. Struckhoff intercepted a pass, forced a pair of fumbles and recovered two fumbles. Struckhoff set an offensive state record with 54 scores this fall and had 56 overall scores. He also had 2,167 yards rushing and 574 passing.

Congratulations to our son Reece Struckhoff of Thunder Ridge on being named 8M-II Defensive Player of the Year. We are proud of you, love Mom and Dad.