v Faces in KS: Karsyn Youngblood - Sports in Kansas 
Warning: include(../includes/bodytag.php): failed to open stream: No such file or directory in /home/kansass/public_html/ks/news/index.php on line 36

Karsyn Youngblood is looking for a big senior year. (courtesy photo from Youngblood) 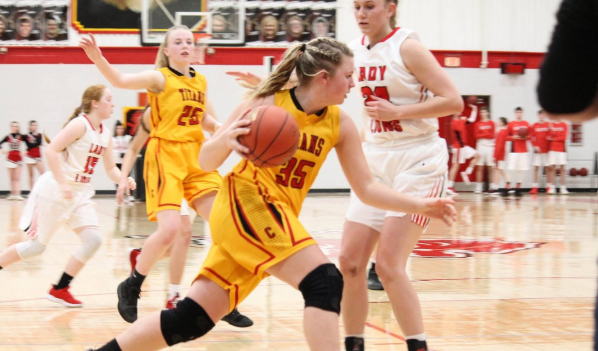 Columbus senior Karsyn Youngblood enters her final basketball season as one of the top returning players in 3A basketball.

Youngblood, who plays for her father and head coach K.C. Youngblood, has scored 826 points in her high school career as she enters her third consecutive year as a starter. She also helped the Titans to a state appearance last year in a loaded sub-state with a 16-8 record. Youngblood was a double-double machine last season averaging near the tops in the state in rebounds at 13.6 per contest while also scoring 16.8 points per game, giving her one of the better stat lines in the small schools of Kansas for 2018-2019.

For her efforts, the 5-foot-11, center, earned 1st team all-state honors in 3A last season along with first team All-CNC honors in each of the last two seasons. She was also a second team all-state pick at Sports in Kansas as a sophomore in 2018. Youngblood has also been a member of Wheat State Elite Basketball in the past, made up of some of the top small school players across the entire state of Kansas.

Youngblood knows that everyone will have to have a big year for them to have another successful season and listed everyone on her team as a key piece if the team were to have a big year. She also has an individual goal to reach 1,000 points this season. With another year like she’s had the last two years, that could come early on in the senior season as she is just 174 points away from the career milestone.

Not only is Youngblood a success on the court, she also gets it done in the classroom. Her favorite subject in school is anything to do with Agriculture and she has a perfect 4.0 GPA. She has aspirations to one day own her own business.

But for now it’s all basketball over the next few months as the Titans return four starters this season that include Youngblood, Gracie Sullivan, a Wichita State softball signee, Dixee Lacen and Jade Fouts that have them as one of the teams to watch in the CNC league once again.

The Titans have just five appearances in the state tournament all-time as a school with appearances in 1977, 1983, 2007, 2015 and 2019. Columbus was knocked out in round one last year by eventual 3A state runner-up, Cheney, 65-43. While the goal is ultimately the state tournament for Youngblood and company in the long run, we caught up with her discuss heading into the 2019-2020 season below.

Chet Kuplen, CEO/Founder of Sports in Kansas, on Youngblood

“I was fortunate enough to have spoken to Columbus HS last spring about Sports in Kansas and positives and negatives of social media in a career day type deal at the high school. To give you an idea of how good of a kid Karsyn is, she (along with fellow classmate and all-state basketball player Patrick Cassidy) came in after the session introduced herself and thanked me for all of the coverage that we had given her and her team last year. And this wasn't a thank you 30 second type of thing, we all had a conversation for 15-20 minutes.  I’ve done this to over 15,000 kids in the last year in Kansas on social media keynote presentations and that is very rare for a kid to do that. While she and Patrick are great players on the court and get a lot of honors, that always stood out to me more. Hoping for a big season for them. Great kids.”

This feature is presented by Labette Bank. Proud to support local athletics.

I started out playing basketball at a young age and have stuck with it ever since. My parents have pushed me to be better since the beginning.

To maintain and improve my post play, become a more versatile outside shooter, and reach 1,000 points.

If we continue to improve each practice, with 4 returning starters, we will have a shot.

My height, communication, determination, and understanding of the game

The Columbus schools and community is very supportive and it shows when the stands are full at our games.

We perform to our best ability; giving 110%, working as a team, and communicating on the court.

Our returning starters from last year Gracie Sullivan, Dixee Lacen, and Jade Fouts, but just like every team each player is important.

The team aspect of it because it takes everyone on the court to do their part in order to win and how intense the games can get.

I played volleyball when I was a Freshmen and a Sophomore.

For the past two years, my father has been my coach. Some may think it makes it is easier, but in reality, it is tougher. Having him as our coach we have an enjoyable time, but we know when it is time to be serious.

We had open gyms and played in a summer shoot out.

Right now my plan is to go to a junior college and then to a 4-year college to major in Business.

I enjoy being around my friends and family and traveling the states showing beef cattle.

In 10 years, I see myself having a job in the business field, hopefully owning my own business, and traveling when I can.

My mom-She always puts others before herself.

I have had dreams of having my own business since I was 10.