v What impressed us after the 2019 semifinal games in KS? - Sports in Kansas

What impressed us after the 2019 semifinal games in KS?

Smith Center is headed to state where they are looking for their 11th state title. 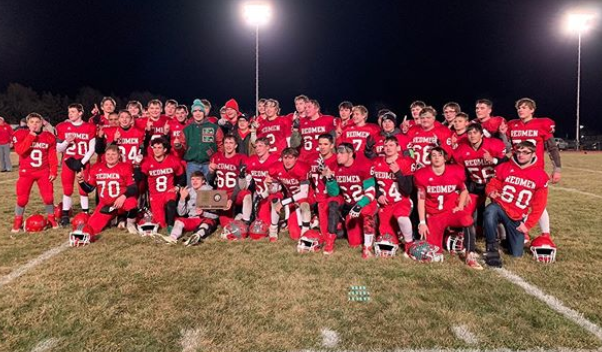 Osborne's Holloway returns – In a Round of 16 win versus Sylvan-Lucas, Osborne standout running back Darrien Holloway suffered a foot injury. He was expected to be out four to six weeks. Holloway had posted on Twitter that his career was finished. Holloway didn't play in the 28-20 quarterfinal victory against South Barber. However, Holloway continued to work with Dr. Aaron Geist, an Osborne graduate and physical therapist who is on staff with the Bulldogs for the first time this fall. Geist, a former all-state wrestler for Osborne, spent significant time with Holloway after practices. Holloway was cleared by a doctor last Tuesday, said head coach Steve Tiernan on Sunday afternoon.

On Saturday, Holloway delivered a remarkable performance in the 52-26 home win against Hutchinson Central Christian in the Eight-Man, Division II semifinals on Saturday. The game was scoreless after the first quarter before Osborne, led by three Holloway touchdowns, outscored CC, 38-8, in the second quarter. He finished with 29 carries for 195 yards and those three scores.

Holloway also had a team-best 12 tackles. It marked a season-high for carries, yards and tackles for Holloway. Overall, he is up to 1,165 rushing yards, 22 rushing scores and 68 tackles this year. This marks Holloway's third trip to a state title game in his career. Osborne won in '16 versus St. Francis and was runner-up to Hanover last year. Osborne (12-0) will play Axtell (11-1) for the Division II state game.

As well, Isaac Detweiler continued his impressive freshman season with nine catches for 109 yards and a touchdown. In a neat comeback story, J.J. Hart has returned from a collarbone injury that had cost him nearly the  entire year. Hart suffered injury against Onaga in Week 3. Two weeks ago versus Centre, he had two rushes for 95 yards, both for two scores. Versus Hanover, his only catch was a 22-yard receiving touchdown.

Maize statistics had Northwest for 94 plays for 891 yards. Maize finished with 52 plays for 468 yards.

NW's own statistics had the Grizzlies for 91 plays for 849 yards.

Northwest gave its player of the game awards to Jacob Amy overall, Jones on offense and Jaden Wheeler on defense. Amy led the offensive line at center. Northwest is back in the state game for the second straight year. The 12-0 Grizzlies will face 9-3 Mill Valley, winners of eight straight.

Norton upsets Hoisington – In Class 2A, Norton delivered a remarkable home upset against Hoisington, 10-8, on Friday at Travis Field. Norton is into the state championship game for the first time in 30 years at 9-3. Norton had lost, 38-7, to Hoisington in Week 8 on the same field when Cardinal senior running back Wyatt Pedigo rushed for 290 yards.

This time, Norton made some defensive tweaks with containment, clogged the middle and tried to do everything to stop Pedigo. Norton held him to 100 rushing yards, and the Cardinals finished 11-1. Norton took a 7-0 lead on the first play of the fourth quarter on a 27-yard scoring run from Kade Melvin when he broke tackles, including one on Pedigo, down the right sideline.

Hoisington responded with a Pedigo rushing touchdown, and Pedigo two-point conversion for an 8-7 lead. Then, Melvin, with more than 1,000 passing and 1,000 rushing yards this year, delivered a signature final drive, including a run for first down on fourth down. Luke Wahlmeier kicked a 32-yard field goal with six seconds left. Norton will face Nemaha Central (10-2) in the championship game.

Smith Center holds off Plainville – For the fourth straight year, Mid-Continent League rivals Smith Center and Plainville met in the regular season and state semifinals. Plainville both meetings in 2016, and SC has won the last six, including a 20-19 home thriller Friday. Smith Center (12-0) will face Centralia (11-1) in the 1A final at Lewis Field Stadium. SC has won 22 straight games and is the back-to-back state champion. Smith Center had a 33-yard touchdown pass with 1 minute, 26 seconds left from Trenton Colby to Griffin Kugler.

Then, Smith Center's Sergio Lambert sealed the win with an interception. Smith Center will go for state title No. 11, which would be a Kansas state record. The Redmen rematch against Centralia, which defeated SC, 20-12, in overtime in the '09 finals, a contest that ended Smith Center's 79-game winning streak.

Centralia into championship – Centralia has won 11 in a row with a dominating 44-6 win versus Jackson Heights. Kamble Haverkamp rushed for 186 yards and two touchdowns, and threw a 14-yard TD pass. Haverkamp has more than 2,400 rushing yards. It's the first title game appearance for Centralia in six years when they won the 3A state title.

Nemaha Central defeats Riley County – NC delivered a highly impressive showing Saturday in a 39-14 win versus Riley County, the defending Class 2A runner-up. RC tacked on two touchdowns in the final three and a half minutes. Gavin Duryea, who missed several games earlier this season for an the off-the-field matter, had four rushing touchdowns. He has four rushing touchdowns in back-to-back weeks, and 14 rushing scores in eight games this year. By the midway point of the third quarter, Nemaha Central had four interceptions of RC standout quarterback Garrett Harmison, according to the Topeka-Capital Journal.

Perry-Lecompton into 3A finals – Perry-Lecompton twice defeated Topeka Hayden this fall, the only team to beat the Wildcats. The 9-3 Kaws  have joined the '08 runner-up teams as the best in school history. Huge credit to Mike Paramore and his staff after P-L graduated all-state dual threat quarterback Dalton Kellum. The Kaws won 35-27 after it trailed 14-0. Thad Metcalfe rushed for 83 yards, and Billy Welch passed for 233.

Geographical, Part I – The Mid-Continent League had another highly impressive year with longtime Hwy 36 rivals Smith Center and Norton qualifying for state. They are located 61 miles apart. Osborne is 26 miles south of Smith Center – with no high schools in between – and was in the MCL for several decades before a recent transition to the Northern Plains League.

Geographical, Part II – The Seneca area has great state representation, too. Nemaha Central, the consolidation of Nemaha Valley and Baileyville B&B after the 2013 season, is into a championship game for the first time. NV made a final in '73. The school is located in Seneca. Axtell is 12 miles from Seneca, and Centralia is 10 miles from Seneca.

Jamboree success – This year marked the first time Kansas had sanctioned jamborees the Friday before the season's first game. Nemaha Central hosted a jamboree, and Centralia, Nemaha Central and Perry-Lecompton all qualified for state.

Big 7 Success – MSC Sports, which covers Northeast Kansas, posted a note to Twitter. Six Big 7 schools won at least six games this season, and the conference's record in non-league games was 27-7. Many teams significantly outperformed preseason rankings. Nemaha and Perry-Lecompton finished outside the top-3 in the league, though are 16-0 in non-league games. Neither was ranked in the top-5 the majority of the year. Sabetha went 6-0 in league, and was 6-3 overall. Jefferson West (8-2, 4-0), Holton (7-3, 4-2), NC (10-2, 2-2), Riverside (6-3, 2-2) and Perry (9-3, 1-3) were the six squads. Holton won highly challenging District 3, though was not favored to do so.

Andale back into the finals – Andale had reached the state championship game in 2017, though lost to Bishop Miege. Last year, the Indians were ranked No. 1, but fell, 21-19, to Pratt, in the semifinals. Easily Andale's closest game was a 29-22 district victory versus Cheney. In the semifinals, Andale had the rematch versus Cheney, which was in the state finals for the first time in school history. This time, Andale, backed by quarterback Easton Hunter and multiple Cheney turnovers, rolled to a 55-20 victory.

Eli Rowland has 113 carries for 1,137 yards and 20 scores. Easton Hunter has thrown for 923 yards and 10 touchdowns. Rowland is up to seven interceptions on defense, and Scotti Easter leads with 86 tackles. Andale (12-0) will face Perry-Lecompton (9-3) in the finals.

St. Francis, Canton-Galva impressive in Division I – Canton-Galva has been No. 1 since the preseason in Eight-Man, Division I, and St. Francis has been ranked second a good chunk of the year. Both teams are 12-0, and neither has won a state finale. They both cruised in its semifinal victories with a 46-6 Eagle win against Madison, and 66-20 for St. Francis over Wichita County. C-G is 1-8, 2-7, 4-5, 10-2 and 12-0 in the last five years.

St. Francis is 7-2, 11-1 and 12-0 in the last three after a state championship game berth in '16. For Canton-Galva, Landon Everett was 4 of 6 passing for 161 yards and a score. Brayden Collins finished with 21 carries for 132 yards and a score, and Kinser Colgin finished with three catches for 96 yards. Southwest Kansas Preps reported Shadyron Blanka scored seven touchdowns in the win, four rushing, two via pick-six and a receiving score.

Derby back in the finals – The Panthers have won 25 straight games, including a 13-0 mark last year. Derby defeated Topeka, 63-35, and continued its great early starts. The Panthers led 28-0 after the  first quarter with two rushing scores from Lem Wash, a pick-six from Jack Hileman and a rushing touchdown from Tre Washington. Topeka running back Ky Thomas, the second-leading rusher in Kansas history, finished with 48 carries for 358 yards and three scores. Wash has had a huge season after stepping for the injured Grant Adler and accounted for six touchdowns.

Olathe North into championship – In 6A East, Olathe North beat Blue Valley, 28-7, in a grinding game. ON had just 246 yards of offense on 47 plays. However, 2,000-yard running back Arland Bruce delivered 29 carries for 110 yards and a score. Senior A.J. Patillo had 15 tackles (11 solo) with three tackles for loss. ON picked off three passes, including a 34-yard pick-six from sophomore Noah Palmer. Of note, while ON senior quarterback Caleb Nelson threw just one pass (an incompletion) in the game, he has 113 attempts without a pick this year. Bruce has also played quarterback and has two INTs on 47 attempts.

Eastern Kansas League success continues – While Blue Valley lost, two EKL teams are back in the finals. As expected, five-time defending state champion Bishop Miege rolled over Paola, 48-14, to advance to the 4A final. In 5A, EKL's Mill Valley defeated league rival Aquinas, 34-31, in overtime. MV has won eight in a row, and avenged a seven-point regular season defeat to the Saints. Aquinas' 22-game winning streak ended. Aquinas led 14-0 after the first quarter.

Mill Valley delivered another impressive performance and outgained Aquinas, 534-415. MV ran 76 plays, 30 more than Aquinas. Cooper Marsh completed 15 of 26 passes for 184 yards, while Tyler Green rushed 20 times for 160 yards and a score. Junior Kolten Jegen had a big defensive performance with 10 tackles and a TFL. Junior Ethan Kremer continued his dominant season with seven tackles, a tackle for loss, a sack and a forced fumble.

Andover Central wins with defense – In Class 4A West, Andover Central beat McPherson, 7-0, the third straight year the Bullpups lost in the state semifinals. Andover Central has a plus-six win improvement off last year. The only touchdown came off a scoop-and-score off a punt snap. Andover Central, known for its passing attack all season, had its first shutout win for the program since a 34-0 road victory versus Goddard in Week 3 of the 2013 season.

Most Titles All-Time (includes teams not in current title game)

-Conway Springs, Colgan, Victoria and Hutchinson each have 7