v Six State Champions Crowned in Volleyball for 2019 - Sports in Kansas 
Warning: include(../includes/bodytag.php): failed to open stream: No such file or directory in /home/kansass/public_html/ks/news/index.php on line 36 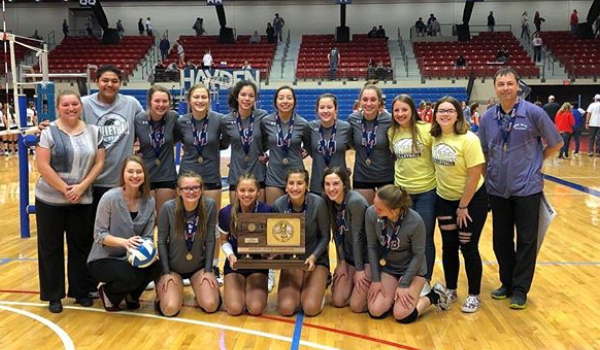 2A becomes much tougher. Wabaunsee takes the crown.

Spearville coach Syble Thompson had led the Lancers to six state tournament appearances in nine seasons. Spearville has oscillated between Class 1A and Class 2A. Last year, the Lancers finished as state runner-up in 1A to Centralia. This season, Spearville was ranked first in Class 1A through the third week of the fall.

In Week 4, though, the Lancers were one of three ranked squads to switch when the new classifications were released. Additionally, Spearville was the only ranked team that had to move up a classification. Wichita Trinity Academy bumped from 4A to 3A and didn’t qualify for state.

Belle Plaine was fifth in 3A and then ranked seventh in 2A. Spearville went from first in 1A to ninth in 2A. The classification adjustments played a key role in the 1A and 2A state tournaments, notably 2A. Thompson remained confident with her team, but knew 2A was going to be stronger.

“I don’t think the girls thought much about it, because they haven’t been at the 2A level,” Thompson said. “Me myself, I was a little concerned moving into the 2A class, because 2A is just a lot more competitive than the 1A class, and I was a little nervous, but I didn’t let them know it. I think they were just pumped up that they were going to go to state.”

Belle Plaine and Spearville each qualified for the 2A state tournament. Classes 2A and 4A were the most parity-laden fields of the six classifications. Additionally, BP and Spearville’s state qualification significantly increased the close matches in 2A.

The competitions featured pool play Friday and the semifinals and finals Saturday.

Additionally, 2A featured four sets that required more than the customary 25 points.

Last year, 2A had just three matches that went three sets and just two matches that required more than 25 points.

Alma-Wabaunsee, the defending 2A runner-up to Garden Plain, eventually went 5-0 and won the championship with a 41-3 record at Dodge City’s United Wireless Arena. The Chargers set a school mark for single season wins, and won the first volleyball crown in school annals.

“It’s really been a big motivator,” Wabaunsee senior standout libero Alexis Hafenstine said. “Honestly, I was thinking about it while we were out here on the court. I knew that we had to come and redeem ourselves kind of, and it’s been driving us the whole season to do better and finish better.”

Garden Plain finished 3-0 in the other pool with a pair of three-set wins against Pittsburg Colgan and Valley Heights. In the semifinals, Spearville delivered a 21-25, 25-22, 25-23 win versus Garden Plain in front of raucous crowds.

In the final, Wabaunsee saved two set points in the first set against Spearville before a 28-26 victory. In the second set, Wabaunsee trailed 16-8 before a 13-0 run. Hafenstine served out the big run and finished the match with 19 digs.

Junior Madisyn Wertzberger suffered a severe ankle injury in the state semifinals against Colgan in ’18. She was limited in the finals loss to Garden Plain and had zero kills on four swings. This year, she came back with 14 kills in the championship. She had the final point on a kill in the first set, and then finished the match with back-to-back kills.

Wertzberger, who called the performance “so much fun,” had her most kills in a match in the past two seasons. Another one of her four double-figure kill performances came in pool play when she delivered 10 versus Jefferson County North.

Sophomore middle blocker Lauren Schutter, who missed all of her freshman year with injury, and senior outside hitter Megan Strait earned 2A all-state tournament team for Wabaunsee. Spearville’s tandem of right side Ehlaina Hartman and libero Alissa Heskamp were repeat all-state tournament selections from ’18.

“Everybody was just really upbeat and positive,” Hafenstine said. “Even though we were down, we knew that we could come back and win. We just had to play as a team together, so I got the rally started, and they helped me finish it.”

Central Plains with huge comeback in 1A to take the title

Central Plains saved three match points and earned a 25-22, 22-25, 26-24 championship victory against Rural Vista. Senior Addison Crites had an impressive all-around match. Class 1A had a series of notable milestones for the field. Central Plains finished 34-11 and won the second volleyball crown in school annals, first since ’15.

It marked the first state appearance for Minneola and Chetopa – which lost out in pool play – in its school annals. Several of the RV girls had been on strong basketball teams that had lost in the first round of the state tournament the last three winters.

“The girls just kind of felt relief (Friday) after we won the first game,” RV coach Adam Sobba said. “They had been here three times in basketball, and just felt that heartbreak in the first round. So I think we started out (Friday) a little nervous, and then we kind of really got it rolling, and we played well (Saturday), just not quite well enough at the end of that one.”

Central Plains finished the year with a 10-0 mark in postseason with three regional victories (including a bye), two in sub-state, three in pool play at the state tournament and two more on state championship Saturday.

“The whole tournament has been incredible,” coach Lisa Crites said. “We have had some girls that haven’t been as consistent, but they come in to the first match and one of our right sides is hitting better than she has hit all season long, and was just making good decisions.”

Hoyt-Royal Valley, which also earned the Class 3A basketball title in the winter, became the first program in state history to win a pair of titles at Hutchinson Community College’s Sam Butterfield Court in the same year, according to KSHSAA notes.

Royal Valley was ranked No. 1 throughout the fall. However, the Panthers had posted a 1-1 record against Silver Lake and Nemaha Central. In the state tournament, RV had to face SL and NC in pool play and won Pool 2.

Royal Valley 5-foot-9 junior Ivy Fink had arguably the best individual offensive season of any player in Kansas. She delivered 546 kills (5.7 per set) with a .370 hitting percentage. Fink collected 45 percent of the team’s kills. RV’s top-three hitters are all non-seniors for a 39-6 team. Royal Valley won the first state volleyball title in school history.

In the final, Fink finished with 13 kills and a .348 average. Junior Morgan Harvey fashioned 10 kills with a .208 average. Runner-up Beloit finished 42-4 and set a school record for wins. Fink, Harvey, and senior libero McKenzie Ogden led RV on the all-tournament team.

Class 4A. Hayden gets its fourth state title in five years.

Topeka Hayden earned its fourth state title in five years with a 25-19, 27-25 victory versus Andale in the championship. Andale coach Kaylie Bergkamp led the Indians to the runner-up. Her mother, legendary Garden Plain coach Gina Clark, paced the Owls to a 2A third-place finish. Andale went 39-3, and Hayden was 30-14. The Indians played in the first volleyball title match in school history.

The Wildcats had eight seniors, including Halle Jackson, a transfer from Washburn Rural. Junior Dejah Miller was a Topeka High transfer. Hayden senior Sydney Hillmer was a key player throughout her career for the Wildcats, who went first, first, third and first in her four seasons for coach Jessica Farmer-Walter.

Class 5A. Saints of Aquians take the 5A title

St. Thomas Aquinas and St. James are longtime rivals. In ’18, SJA beat Aquinas, 26-24, 20-25, 34-32 in the title. The 161 points were the most total points for a state championship match in the rally scoring era, according to KSHSAA records. SJA also defeated the Saints for the ’17 crown.

This year, Aquinas and SJA split two regular season meetings. Aquinas was the only Kansas team to beat the Thunder. At state, Aquinas and SJA, both ranked in the top-25 nationally during the fall, were placed in the same pool. SJA delivered a 25-19, 25-16 season against the Saints.

Blue Valley was runner-up to Lawrence in ’18. BV earned the first volleyball championship in school annals. The Tigers didn’t lose a set at state and finished 32-9.

Washburn Rural had five freshmen on its roster for coach Kevin Bordewick, who cleared 900 career victories this year.