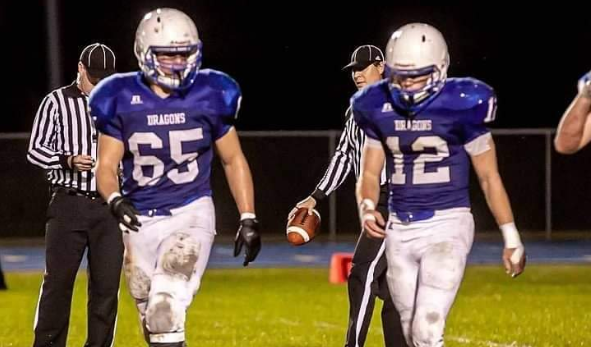 This feature is presented by the Halstead Bank, proud to support Halstead High School Sports. Best of luck to all teams in 2019-2020.

Coach Jason Grider labeled Propst and Lopez one of the best tailbacks he’d ever seen in junior high. Coach Grider offered similar praise for Doug, one of his two sons and a former middle school fullback.

Doug has started on the offensive line since his freshman year. Now, they block for Halstead’s run-heavy offense that averages 320 yards a game against just 20 passing yards a contest. Doug’s brother, senior Scott Grider, leads the team with 127 carries for 878 yards and 18 scores. Junior quarterback Lakin Farmer has 76 carries for 533 yards and eight TDs.

The offensive line’s talent is one of many strengths for the Dragons, which have vaulted to No. 2 in the Class 3A rankings this week. Halstead was not ranked earlier this year and then moved to fifth. The Dragons stand at 7-0, 4-0 in Class 3A, District 5 play. Halstead has won the district. Grider said the defensive line “has set the tone,” and the offensive line “has played very, very well.”

Halstead and Holton (5-2) are two teams that have enjoyed turnarounds and added to the excellent depth in topsy-turvy 3A, the state’s deepest classification. The Dragons have already bettered last season’s 5-4 record and moved to 47-16 in Grider’s sixth year with the program. On Saturday, Halstead comes in for film and runs through the results in its league and district.

“3A is brutal,” Grider said. “Whoever wins it, just like any year is really going to deserve it. The east is just as brutal as the west is with Andale and Collegiate and Cheney and Scott City. You can go on and on. And you look in the east, Marysville and Wamego and Sabetha. Whoever comes out of this is going to be well-deserving of a state championship.”

Entering Week 6, Grider called his team “about as healthy as we have ever been.” Last year, Halstead missed inside linebacker Kaden Kraus for nearly the full season. Junior Cole Herman missed all of 2018. He plays guard opposite Doug Grider. Defensively, Herman has recorded 34 tackles.

“Heckuva of an offensive guard for us opposite Doug,” coach Grider said. “Done an outstanding job defensively.”

“We usually have got to chase them out of the weight room,” Grider said. “They are in there, getting stronger and doing extra. It’s certainly helped keep us healthy and allowed us to play the type of physical football that we want to play.”

“It frees Doug up to run more, and he has done just an outstanding job at our fullback spot,” coach Grider said of Kraus’ return.

Propst has 27 tackles, one interception and one fumble recovery, though Grider said his impact is beyond the numbers. Propst was banged up in the preseason jamboree and did miss a game, but earned the team defensive player of the week honor earlier this fall.

“He’s a great run stopper, and then we also put him out in coverage,” Grider said. “He can do it all, and a lot of the times he doesn’t get the accolades that maybe some of our other guys do. He does a lot of our dirty work. He has been very, very good for us.”

In addition, Halstead has made huge strides at defensive back. Farmer has picked off seven passes – the same number the Dragons recorded as a team all last year. At cornerback, juniors Carter Hiebert and Cameron Kohr have combined for four interceptions.

Hiebert set a school record with a 104-yard interception return for a touchdown in a Week 2 win versus Pratt. Coach Grider said the corners have been more athletic than some past years. Scott is a three-year starter at safety.

“We like to get Scott up in the run game a little more, and Lakin a little more in coverage, but they both can go up and play the run and both are very good cover guys,” coach Grider said. “We are really, really fortunate that they are pretty interchangeable. Both can play the free or the strong (safety), and that’s kind of how we do it. If we get a look, rarely do we flip them. We feel real comfortable with them doing either one to come up in run support or cover the pass.”

The special teams is normally a strength for Halstead, and again in 2019. This year, senior Ryan Rodriguez has 12 touchbacks. Senior Brian Casey has 37.5 yards per punt. Scott Grider has 463 return yards, and Halstead has 718 return yards overall. Grider ranks second among Kansas 11-man players in return yards, according to MaxPreps. Team-wise, the Dragons also stand second in return yards.

“We have been very, very fortunate with the kids we have,” coach Grider said.

Coach Brooks Barta is in his 24th year with Holton and has 224 career victories. Last season, Holton slipped to a 3-6 record, the program’s first losing season since Barta’s first fall.

This year, Holton is 5-2, 3-1 in Class 3A, District 4, the classification’s best district. Holton defeated then-No. 2 Marysville, 30-8, last week. On Friday, the Wildcats get Wamego (5-2, 3-1) at home. Those two teams and Marysville all have one district loss, although Holton will earn the district title by beating Wamego. Barta said the biggest change is Holton’s offensive line improvement throughout the season.

“It kind of came to fruition for us the other night,” Barta said.

Holton has seven new starters on the offensive line. Senior Noah Woltje, the team’s only returning offensive line starter, was lost for the season with an injury.

“At our school, we get a lot of kids out that like to play offensive line,” Barta said. “On warmups, it’s a little bit different than seeing a lot of other teams. Half of our team is linemen.”

Holton is starting two seniors at tight end, the first year they have played the position. Frequently, Holton has two or three sophomores, a junior and a senior on the offensive line.

“We are still a little young, and we knew it was going to take us some time,” Barta said. “Probably second just our mental approach. We have played hard and been physical all year, but just haven’t had a strong enough preparation and mental approach to the game, and I thought that really showed up for us on both sides of the ball.”

Barta said senior Ian Watkins, at 5-foot-9, 145 pounds, has anchored the line. Will Davies and Jackson Gilliland are seniors up front.

“He has played really well,” Barta said of Watkins. “He is kind of an undersized tight end, but he’s a good football player. I would probably call him the guy that we depend on a lot. After that, it’s just a bunch of guys working together.”

Along with Barta, Holton has three coaches who assist with the lines: Alex Bartel, Matt Hundley and Cameron Karn. The Wildcats have run the ball on all but nine of the team’s 350 snaps. Barta, who has three state titles and four state runner-ups, is the son of Roger Barta, the legendary retired coach at Smith Center.

“We are basically a man blocking team,” Barta said. “Which is we want to be a hat on a hat. That’s 90 percent of what we do is blocking the guy in front of you, and that’s a hard thing to do a lot of times. We spend a lot of time doing it. We don’t spend time pass blocking. We don’t spend time doing a lot of other things. We work on the fundamentals of a couple heavyweight wrestlers base blocking.”

“The fundamentals take some time, and then just physically improving, getting bigger and stronger as they progress through the system and through the year,” he added.

Junior Konnor Tannahill, the team’s leading rusher as a sophomore, has 103 carries for 557 yards and seven touchdowns. Canon Karn has 511 rushing yards and seven scores. Overall, five players have at least 210 yards.

“We knew we had good backs coming back, and we feel like we have four backs – as the line gives them a chance to run downhill, they are pretty good,” Barta said.

The biggest surprises from other classes:

Lawrence finished 1-8 last season, though is 7-0 and ranked second in Class 6A. No. 1 Derby, Lawrence and Dodge City are the only unbeaten teams left in 6A. DC was 6-4 last fall and has made a notable improvement defensively. Alden Knedler has enjoyed a big all-around season and quarterback Beau Foster has paced DC’s 7-0 start. All-purpose threat Devin Neal has led the Lions’ offense.

Maize South finished 6-4 in 2018 and has started 7-0 this year. The Mavericks have posted back-to-back shutouts despite significant defensive injuries. Maize South has a host of playmakers, including quarterback Colin Shields and defensive back Trevion Mitchell.

Andover Central was 5-5 last year and stands at 7-1 and ranked No. 5 in Class 5A. The Jaguars, with quarterback Shomari Parnell and wide receivers Matt Macy and Xavier Bell, improved from 15.7 points per game in ’18 to 30.3 this fall.

In addition to Halstead and Holton, Columbus is 7-0 and will face Frontenac for a district title. Columbus was 1-8 last fall, though has enjoyed  reat success with new coach Blake Burns. Titan quarterback Patrick Cassidy has accounted for 22 offensive TDs. Cheney is 6-1 after a 2-7 season in 2018. The Cardinals face Andale for the district crown.

Norton has won five straight games and will face No. 1 Hoisington for the district title this week. Melvin has completed 62 percent of passes for 1,086 yards with an 8/3 TD/INT ratio. He has rushed 113 times for 682 yards and nine scores. Senior Luke Wahlmeier has emerged with 105 carries for 632 yards and five scores. Junior Jonah Ruder has been banged up in the past, though has 25 catches for 429 yards and three scores. Wahlmeier and Ruder combined for 313 total yards last fall.

Senior Judson Wiltfong holds a Fort Hays offer, and paces the defense with 77 tackles, 10 for loss and eight sacks.

Southeast-Cherokee was 4-5 in ’18 and is 6-1 this fall with its first conference title in more than 50 years. Riverton (4-3) has also impressed some this season after struggling in recent memory.

La Crosse has lost two straight games, though is still 5-2 after a 3-6 year in 2018. Sophomore Colby Stull has 116 carries for 1,106 yards and 15 touchdowns. Senior Hunter Morgan has passed for 936 yards with a 9/6 TD/INT ratio. Senior Michael Showalter has enjoyed a big season with 79 tackles, 11 for loss.

Cedar Vale-Dexter was 5-4 last year, and was expected to have an improvement this fall. Junior Brogan Myers was banged up part of ’18 and still gained 1,422 yards. He and quarterback Clayton Henderson have led the Spartans to a 6-1 start and District 1 championship.

Minneola, behind a 1,400-yard season from Tuck Lang, improved from 4-5 to 6-1 and has clinched District 8. Thunder Ridge was expected to improve and has jumped from 5-4 to 7-0 behind more than 1,000 rushing yards and 100 tackles from Reece Struckhoff.