v Faces in KS: Kerrigan Rudolph - Sports in Kansas 
Warning: include(../includes/bodytag.php): failed to open stream: No such file or directory in /home/kansass/public_html/ks/news/index.php on line 36

Kerrigan Rudolph is one of the best golfers in Kansas for Goodland HS. (courtesy photo) 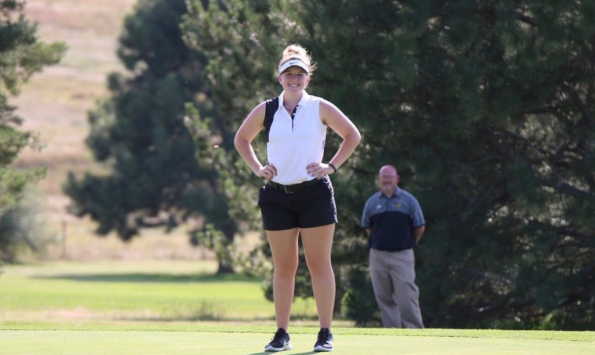 Goodland senior Kerrigan Rudolph opened her high school career with an 84 and a ninth place state finish at the Class 4A state golf tournament. Then, she took a really bad fall during her freshman year of basketball and landed wrong on her back. Rudolph felt lower back pain, though continued to play the sport.

In the summer, Rudolph fell again. This time, she couldn’t get up off the basketball court and ended up in the emergency room. The ER doctor told Rudolph she had a lower back muscle issue. Rudolph went to the chiropractors, who tried to put her back in place. She continued to have pain.

Sophomore year, a doctor diagnosed Rudolph with a series of ailments: three separate fractures, scoliosis and spondylolisthesis, or a slipping of the vertebra that generally occurs at the base of the spine.

Rudolph, one of the state’s top golfers, again posted a strong season with an 88 at state. She took third place and helped Goodland to a third place showing in Class 3-2-1A.

Rudolph had to sit out her sophomore track season and most of the summer.

Jim Alcorn, the president of the Northwest Kansas Shrine Club, sponsored her to attend the renowned Shriner’s Hospital in St. Louis, a round trip drive of more than 1,300 miles down I-70.

Within five minutes, Rudolph was in a room talking with spine specialist Dr. Michael Kelly. He centers his practice on pediatric and adult spinal deformities, including revision spinal surgeries.

Among other concerns, Kelly told Rudolph she had five percent scoliosis in the upper spine, and spondylolisthesis in the lower spine. Kelly offered two solutions.

Rudolph could try a back brace, or have surgery. Rudolph started bawling when she heard the options. If she had surgery, her athletic career was likely done.

She didn’t want to stop sports.

Kelly told Rudolph she could continue athletics as long as she took care of herself. Rudolph had to wear the brace everyday, except for night time and a four-hour break.

“At the time I was freaking out, because I didn’t know what was going to happen to me in the future,” Rudolph said. “And what he taught me basically is I can still do what everyone seems (to think) I can’t do.”

Rudolph is limited on weight training and can’t squat with any weight. She can bench press and performs more body squats and leg lifts.

“It was really hard for me to wear the brace,” Rudolph said. “Because I felt really insecure at the time, because I always had to wear it under all my clothes, over my clothes. And so it was a really hard adjustment period for me, and I was afraid people would make fun of me. But after that, I knew I would have to wear it to get better.”

Last December, Rudolph had another appointment in St. Louis. One of her fractures has completely healed. The middle one is partially healed, while the bottom one will never heal.

In the future, Rudolph, depending on her pain tolerance level, might need surgery. Rudolph has moved away from using the brace and has strengthened her core through ab workouts. Currently, Rudolph “doesn’t really have that much pain.”

“It’s been a real roller-coaster ride, and I am happy that I came back, and I am able to play sports,” Rudolph said. “…Without (Shriners), I could still be sitting out of all the sports – and I think that would have hurt me a lot more than anything.”

Last year, Rudolph finished as state runner-up in 3-2-1A with a 79. Goodland took second as a team with a 376, 14 shots behind Syracuse, the two-time defending state champions. This season, Rudolph and a veteran Cowgirl squad has continued to post an excellent season.

At the 3-2-1A Hugoton regional Monday, Rudolph finished in third place with a 79 (plus-5). Rudolph finished behind Johnson-Stanton County senior Rylie Cook (72) and Colby senior Brielle Bange (74). Cook is the reigning state medalist and good friends with Rudolph.

Goodland senior Colby Perryman took ninth with a 90, while senior Brooke Drennan finished tied for tenth with a 91, according to the official KSHSAA results. Senior Peyton Belden was 13th with a 99. Junior Ashtin McClung tied for 24th at 109.

Goodland captured the regional title with a 359, three shots ahead of Colby. Three of Goodland’s four seniors have played together since their freshmen year.

The Cowgirls will have a strong chance for a 3-2-1A state title next Monday and Tuesday at Salina Municipal. The state tournament returns to a two-day format. Current coach Connie Livengood also led Goodland to a girls’ golf state title in ’08.

“I take a really big leadership role on my team,” Rudolph said. “I am responsible. I have a lot of experience with playing golf, so that makes it even more fun for me. I like meeting new people. I hit the ball really far.”

Rudolph has loved the sport ever since she started playing at age three. Her dad, Emmet, served as the Concordia High School head golf coach and coached the sport for around 15 years. Rudolph has followed several role models in golf, notably Cassie Lowell, a Concordia graduate.

She was the 2010 Recipient of the Kansas Women’s Golf Association scholarship. Lowell was the school valedictorian and earned four top-seven finishes at state.

Concordia finished as state runner-up three times. She was also involved in forensics and journalism. Lowell played golf at Northwest Missouri State University and earned MIAA Freshman of the Year, MIAA Player of the Year and multiple times Academic All-American.

Rudolph carries around a 3.3 grade-point average. She enjoys writing/English and math. Rudolph wants to become a teacher, preferably in Goodland, and coach multiple sports, including golf. She is looking to play college golf.

“I wanted to be like her when I was younger,” Rudolph said. “And I followed in her footsteps, I worked hard, and the one thing I really love about the sport is just meeting the people you meet, lifetime friends and people you wouldn’t expect to meet, and it’s just crazy how we all can come together just for this one sport.”

The family moved to Goodland before Rudolph started eighth grade.

“It was quite a bit of a change, but I met a lot of great people out here, and I wouldn’t want to change it for the world,” she said.

Rudolph first noticed her distance in seventh grade. She plays with Titleist Pro V balls, Rogue One irons and a Cobra driver with a 10.5 loft.

Rudolph has hit the Cobra for several years – “I love that club so much,” – and averages around 260 yards on her drive. Rudolph called her seven her favorite iron.

After her top-10 finish as a freshman, Rudolph wanted to achieve the same goal as a sophomore. At state, she struggled some and wasn’t sure of her placing. Once she saw scores, Rudolph became emotional and “super excited.”

“I didn’t think that was even possible at the time for me, but it was crazy,” she said.

Last year, Cook played in the group in front of Rudolph at state. Cook’s dad talked to Rudolph. Cook shot a 76, while Rudolph had a 79, the best state mark of her career. As well, Perryman took tenth at state with a 91.

“I was pushing her, because they heard how I was doing, and she was pushing me,” Rudolph said.

This season, Goodland won the opening tournament in Hugoton. Then, the Cowgirls won its own tournament and Rudolph captured the title with an 82. Goodland followed with wins at Cimarron, Colby, Holcomb and Stanton County.

After the regional tournament, Rudolph tweeted “we aren’t done yet. See you next Monday Salina…we’re ready. #statebound #15 years.”

Chet Kuplen, CEO/Founder of Sports in Kansas, on Rudolph

"What a great young woman. I had the opportunity to meet Kerrigan and her father this summer at the Kansas Shrine Bowl when executive director B.J. Harris introduced us. Then I heard her story and knew instantly this is someone that we need to feature this school year, incredible what she has been through and to still be one of the best competitors in the state says alot about her passion and fight. She is such an inspiration, as is Eli Petersen, another kid I met this summer at the Shrine Bowl with his father Jake, we will post a picture of the two (Kerrigan and Eli) together on the Facebook so you can see that as well.  You wouldn't know by looking or talking to Kerrigan that anything is wrong, she is such a positive girl. I'm really happy to see her success. Also a huge s/o to the Shriners Hospitals. What a great organization and we are lucky enough to partner with them at Sports in Kansas. "

What is it like playing for your coach? Connie Livengood is the longtime Goodland girls’ golf coach.

“As a coach, she is amazing. She pushes us to our best abilities, and she knows what we are capable of, so now if we slack off during practice, she gets on us, but she makes sure that she always keeps us positive. She is an amazing coach, and I know that she is the best coach that I have had so far. … She is someone that you can talk to during practice if you are having a rough day, but she is just all around a great coach to have.”

What are your greatest strengths?

“I take a really big leadership role on my team. I am responsible. I have a lot of experience with playing golf, so that makes it even more fun for me. I like meeting new people. I hit the ball really far, but I wouldn’t say my short game is the best right now, but that’s why I am improving that right now.”

You and Johnson-Stanton County’s Rylie Cook, the defending state champion, compete at many of the same tournaments. You have played against her all four years. What is that relationship like?

“Anytime we play, we take it serious, but we also have fun with each other, because we know this will probably be our last (season) even coming close to playing with each other.”

How do you keep busy on the long trips to the Shriner’s Hospital in St. Louis?

“The first time we actually went to St. Louis, we went to the Arch, and we went to museums and everything just because we have never been there. We wanted to see what it was like there. The past time, we just really hung out. Sometimes we go shop or we just walk around St. Louis, and we just hang out with each other as a family.”

Golf is certainly your No. 1 sport. But you mentioned how much you enjoy track and basketball. What do you enjoy the most about those two sports.

“It’s incredible how many people you get to know more during those sports. I know I usually spend time with all my golf friends during that season, and during basketball and track, it’s a whole different atmosphere. Track is more of an individual sport in a way, but I have some really good friends that I throw with every single day, and for basketball, I have really good friends that are underclassmen.”

Where do you see yourself overall in 10 years?

“I am hoping to become a teacher in western Kansas, preferably Goodland, and I also want to be a golf coach here, and hopefully basketball maybe. I am really hoping golf and basketball, more than likely. If I can do track, that would be great.”

What’s your most favorite place to eat?