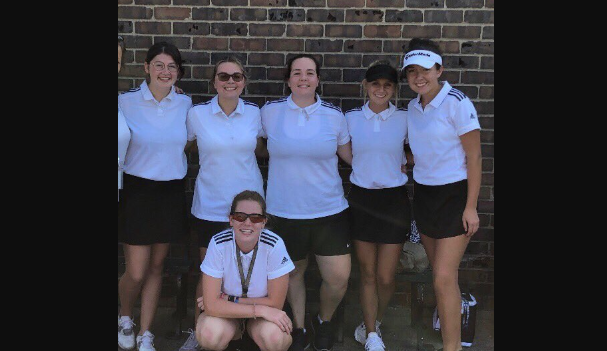 Instead of just one athlete like we do monthly, we went with a team pick to make it our Athlete(s) of the Month for Labette Bank in Southeast Kansas and our pick is the Frontenac High School Girls Golf Team after capturing the CNC League Title from their regular season play earlier this week. The St. Mary's Colgan girls team were league runner-up.

The Raiders, led by head coach Loretta Audley and assistant Lauren Hougton, captured the league title by their performances over the last eight meets. The Raiders won two meets this year of the eight (Frontenac, Indpendence) while taking second at Galena, Pittsburg, and Columbus. They also took third at Uniontown and Baxter Springs. Their lowest finish was a fifth place finish at GIrard. Their low 9-hole score this season was 210 at Columbus while their low 18 hole score was 421 at Independence.

In the last meet of the year both Brianna Green and Mallory Snow medaled while Green, Autumn Bryand MacKenzie Hensley and Kiera Threlfall earned all-league honors from the CNC.

Labette Bank would like to congratulate the lady Raiders on their 2019 CNC League Title. Best of luck at regionals.

Frontenac will be back in action on 10/15/19 as they play in the 3-2-1A Regionals hosted by Uniontown in Fort Scott, teams in the regional include: Baxter Springs HS; Caney Valley HS; Erie HS; Eureka HS; Fredonia HS; Frontenac HS; Galena HS; Howard-West Elk HS; Pittsburg-St. Mary's Colgan HS; Uniontown HS.