v Faces in KS: Bo Dilliner - Sports in Kansas 
Warning: include(../includes/bodytag.php): failed to open stream: No such file or directory in /home/kansass/public_html/ks/news/index.php on line 36

Bo Dilliner is off to a huge junior season for Anderson County. (courtesy photo from Dilliner) 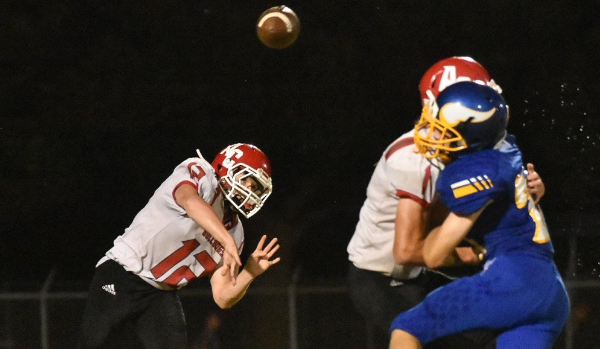 Bo Dilliner isn’t the biggest guy on the football field at 5-foot-7 and 152-pounds. But he’s not the easiest guy to bring down as he has shined to a big season so far for the Anderson County Bulldogs in Class 3A.

The Bulldogs, led by Logan Pegram, are off to a very solid start this year. Pegram, a former all-state player for C.J. Hamilton at Silver Lake and FBS starter at Northern Illinois, knows a thing or two about winning. A big reason for that success this season has been Dilliner.

Dilliner, a junior quarterback and safety, has been a big weapon in the spread offense this season for the Bulldogs who returned six offensive starters. He has rushed for 866 yards with 11 touchdowns while throwing for 425 more and five more scores. Dilliner has got it done with his legs mainly but is still a threat in the passing game. His favorite target has been Tanner Spencer who has caught 15 balls for 271 yards and five touchdowns. Dilliner had a huge night in the win over Girard on Friday with 199 rushing and 143 passing with four total touchdowns on the night as they defeated the Trojans, 35-28.

Dilliner is pound for pound one of the strongest football players for his size in the state. He squats 405, cleans 265 and benches 265. He also has a 4.5-4.6 hand-held 40-time range. Dilliner also played wide receiver earlier in his career earning all-league honors and has started since he was a freshman in football.

He is also a breakout baseball player hitting .441 as a catcher last year on the way to all-state honorable mention honors.

Anderson County, who also returned eight starters defensively, currently sits at 3-2 and has won its first two district games, defeating Iola the week before Girard, 35-6.  AC only losses have come to a tradition solid Wellsville program (34-23) in week one and Santa Fe Trail (43-26) in week three. It’s the first time Anderson County has at least three wins in a season since 2015 when they went 5-5. The school has never won a football playoff game, going 0-6 all-time in the KSHSAA playoffs with six total appearances, maybe Pegram and Dilliner can change that soon. Next on the schedule is Osawatomie this Friday. We caught up with the outstanding junior below in the latest Q&A edition of Faces in Kansas.

How did you get involved in football? I have always been involved with the game. I grew up with a father that had a passion for football, he had me throwing a football before i can remember. I personally would do anything to play this sport forever.

What are your goals this season? I am hoping we can make a playoff run in 3A, everyone on the team has a passion to play the game of football. I believe we are a great team if we all play at 100% at all times.

Do you guys have a shot to make a run this year? It’s all about effort. If we put the hard work and effort in, I think we have a chance of going on a run in the playoffs.

What makes you such a force as a player? I put all my faith in my offensive line, if they do their thing, i can do mine. It’s a team game, if one person doesn’t do their job, it screws the whole play up. I put a lot of my time into this game though. My summers are dedicated to the weight room and the football field.

What’s the atmosphere like to play football on Friday night for your school and town? This is the one thing that I will miss after I leave high school. Playing in front of everyone and playing for my town is amazing. The energy at our stadium is crazy when there is a big play or when we score. Looking up and seeing a whole town behind me is the greatest feeling in the world.

For anyone that hasn’t seen one of your games, why come to one? No matter the outcome, win or lose. The energy is always crazy and exciting to watch.

Who are other key players on your team? Anyone and everyone on our team. We all work hard and it’s electrifying to be winning a game and watch our whole sideline go crazy. Especially our scout team players, they play against our varsity to make us better everyday and they will eventually be the faces of Anderson County football. Everyone is a key player on our squad.

Do you play any other sports, tell us about that, what other positions do you play? I play baseball, baseball and football are my passion. I live to play these sports. I have had some ups and downs during baseball season, going through several slumps but last year I feel like it changed. I felt good in the box all year. In football, I can also play Running back, wide receiver, and on defense I play strong safety.

What is it like to play for your coach? Playing for my coach is electrifying, coach Pegram always has energy at practice and on the game field. He always pushes us to be our best and he always puts his best foot forward. Pegram has a passion to coach us kids.

What did you and the team do in the off-season to become better? We lifted every Monday, Wednesday and Friday for an hour then did running exercises and sprints. Some days we did ladder drills and cone drills. It was definitely our best summer we’ve ever had at Anderson County.

What interest are you seeing at the next level and what are your plans? I am hoping to play at a D1 college for football or baseball. It has always been my dream to play professional sports. I plan to major in computer programming.

Favorite thing to do when you aren’t playing sports? Lifting weights is definitely my favorite hobby. I love lifting weights. I also like to play video games when I have free time to do so.

Where do you see yourself in 10 years? I see myself out of school, working as a computer programmer.

Who is your role model? My role models are my parents. They have always done what is best for me, even if it’s not in their best interest, they still do what’s best for me. They are great parents and I would never give them up for anything. They work hard everyday at work and put food on the table every night.

Best place to eat in your town or the surrounding area? The El Jimador mexican restaurant on our square is pretty good if you ask me. I would eat there for every meal if I could.

One thing the average person wouldn’t know about you? I am a freak when it comes to technology.

Anything else to add? Out of my whole life, my grandparents have missed very few games. If they can’t make it, it makes them very upset. It’s always amazing to look up and see my grandparents cheering me on in the stands.