Jaci Brinker has over 1,300 kills in her career for Valley Falls. (Gena Marie Photography) 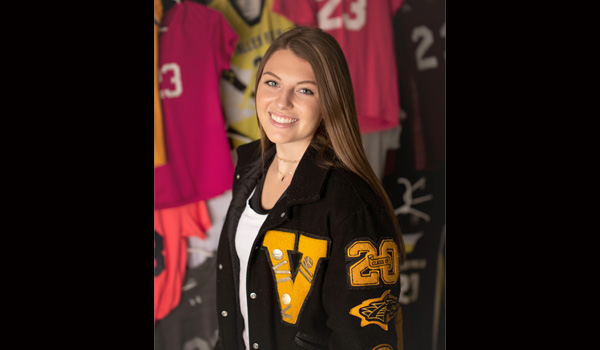 Jaci Brinker is one of the top small school volleyball players in the state of Kansas. The senior outside hitter from Valley Falls High School is a four-year starter for her team.

Brinker has goals for herself this year like being one of the best 1A volleyball has to offer and getting to the 1,500-kill mark. All goals that could be achievable with a solid season.

The team is rebuilding right now as its no secret with a 7-15 record under Whitney Bryant but Brinker feels like the team is coming along with the hard work they are putting in.

Brinker is also an outstanding student athlete with a 3.9 GPA. She has interest in playing volleyball at the next level but is still undecided. She also plays club volleyball in the off-season.

We caught up with the outstanding senior student athlete below in the latest Q&A edition of Faces in Kansas .

When I was young I decided to play with my school team and then I just fell in love with the game.

For the team our goal is to make it to substate and continue to get better every single day. Personal goal, is to be 1A State player of the year and hit at least 1,500 kills.

This year is a rebuilding year, but we are working hard everyday to make that our goal for this year and years to come.

My experience as a player and knowing the game, it has built confidence and helps me make the plays I need to.

The atmosphere is fun but also family oriented, everyone is there to cheer us on win or lose.

The small town atmosphere makes coming to watch worth your while. We always make the games exciting, we never just give up no matter who we are playing.

Kenzie Nellis is our setter. She brings varsity experience to the court and is the reason I am able to hit the ball affectively. Without Kenzie there is no way I would be where I am at today with my hitting accolades.

Summer Carter is our other outside hitter. She also brings the varsity experience and can put a ball down when we need her to. She also is one of our more consistent passers on the court.

My favorite thing about volleyball is feeling after getting a huge kill or a big block, nothing tops that.

I have played basketball and softball as well. In softball I played third base. In basketball I was a guard and post, last year I received NEK All-League honors for basketball.

Playing for Whitney is fun and exciting. She knows how to get me fired up and ready to play. She also motivates us to work hard at practice so we can accomplish the goals we want to. Whitney knows what she is talking about and is a great coach. I believe that Coach Bryant will be a big part in future years of success in the Valley Falls volleyball program.

In the summer we work hard in the weight room and open gyms to make as many improvement as possible. I play club volleyball in the off school season.

I am interested in playing volleyball at the next level, at this time I have not made a decision.

Hanging out with my friends and watching Netflix are my favorite things to do when I’m not playing volleyball.

I hope to have a nursing degree, good job, and potentially coaching volleyball somewhere.

Both of my parents are my role models. They push me every day to be the best person and leader I can be. They have also taught me that working hard will get you where you want to be.

I have a birthmark in my hair.