v Faces in KS: Steele Morin - Sports in Kansas 
Warning: include(../includes/bodytag.php): failed to open stream: No such file or directory in /home/kansass/public_html/ks/news/index.php on line 36

Steele Morin is looking to be one of the top tacklers in the state. Photo: Daunita Clausen 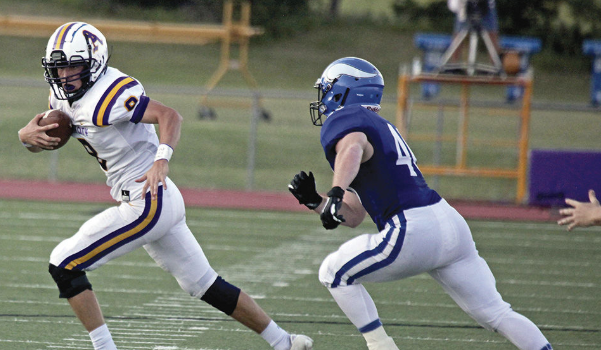 Winfield senior linebacker Steele Morin is having a solid football season for the Vikings in 2019. The team is also off to a solid 2-1 mark in 2019 after winning just three total football games last season.

Morin, a 5-foot-9, 205-pound, linebacker and fullback, has 38 tackles over the first three games of the season. He had 31 after the first two weeks and last week just picked up seven in the blowout win over Circle in limited playing time. Morin had a big year in 2018 as well as he racked up 108 tackles last year in the 4-2-5 defense of Winfield. He has also shined as a lead blocker as a fullback on the Winfield spread/read-option offense.

Morin is a multiple-sport athlete at Winfield High School where he also participates in baseball and wrestling. In baseball, he has twice been an all-league selection, while he has qualified for state wrestling in all three years of high school so far, with a full senior a season left. Morin contributes his wrestling background to his football success as it has taught him balance, foot work, and mental toughness, all key attributes to a linebacker.

In addition to being a standout in athletics, Morin is also a very good student with a 3.65 GPA. He is also part of the National Honor Society and Honor Roll.

The Vikings also feature Chance Price at safety and receiver after moving from linebacker last season and is an all-league caliber player. They also have a solid defensive line led by Zach Phillips and Dalton York.

Winfield, led by head coach Linn Hibbs, is looking for their first winning season since 2013. Their one loss this season came to 4A contender McPherson (47-0) but the Vikings took care of business in week one over Arkansas City (20-18) and last week over Circle (59-0). The Vikings get Labette County High School (2-1) at home on Friday. We caught up with Morin below in the latest Q&A edition of Faces in Kansas.

This feature is presented by the Winfield Booster Club. Proud to support all athletes at Winfield High School!

I started playing in first grade when my dad was coaching, and I have been hooked ever since

My goal is to win the league and to host a home playoff game.

Yes, I believe we have a great senior group that plays hard and has the potential to go deep.

Aside from working hard in the off-season, I think my football IQ and film study. plus my background as a wrestler is really what takes my play to the next level.

Its so much fun. The community always shows up and supports really well.  Nothing beats the adrenaline rush of running out of the tunnel on a friday night with fans screaming.

We are really solid on the defensive side of the football. The whole team really flies around the field making plays and delivering hard hits, it's truly just a lot of fun to watch.

Our team is loaded all across the board, but one player who really sticks out is chance price. was an all-league guy last year at linebacker. This year he's playing FS/WR. Hes tough as nails and flies around the field well on both sides of the ball.  Also have to give credit to the big boys on the D-line, zach phillips and dalton york do a tremendous job of demanding double teams. Without those two doing what they do I would not be near the player i am.

My favorite thing about football is competing and pushing myself with my teammates week in and week out.

Do you play any other sports, tell us about that, what other positions do you play

I wrestle and play baseball as well. I wrestled 145 as a freshman, 152 as a sophomore, 160 as a junior, and this upcoming season i will be at 182.  wrestling is one of the main reasons im able to have my success. it has taught me so much about hand fighting, balance,footwork,mental toughness literally everything a linebacker needs. I also play baseball, you can pretty much find me everywhere on the diamond except middle infield, however my natural position is catcher.

Coach hibbs is an old school guy who loves to work, but we all love playing for him.

we went to weights, 7 on 7’s and two padded camps. many of us also ran routes and threw several times a week as well.

I have not  had much interest from the next level, I have visited Northwestern Oklahoma State University and Southwestern, but have yet to receive any official offers. But my goal is to play football somewhere next year, however if that doesn't work out I would definitely want to wrestle.

favorite thing to do when im not playing sports is either to fish, or to just go hangout with the guys.

I see myself teaching and coaching sports at the highschool level.

my favorite subject in school would have to be social studies.im typically a good student,  My GPA is a 3.65

my role model would be my dad. hes always there for me supporting me at whatever i do.

best place to eat in Winfield is either el magueys or gambino's pizza buffet, either one is always a good choice.