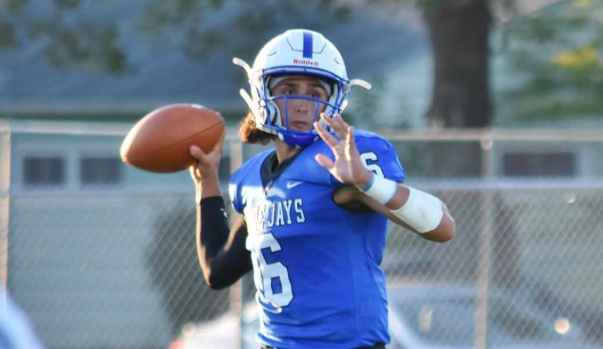 Junction City High School has been one of the nice surprises this football season in Class 6A with a perfect 3-0 record to start the 2019 season, just one year removed from a disappointing 4-5 mark in 2018.

As they have gotten the attention of many in Kansas so far after three weeks, so has their quarterback. Junior quarterback, Andrew Khoury, has been one of the breakout players so far in Class 6A as a first-year starter. It's not often you see a first year starter shine right out of the gate, especially at the 6A level.

Khoury, who stands 6-foot-1 and weighs 180-pounds, is near the leaders in passing yardage this season as he has thrown for 737 yards with seven touchdowns while rushing for another 106 with two more scores. Khoury has done a nice job of managing the spread, balanced offensive attack for long-time coach Randall Zimmerman as JC has knocked off Hays (48-30), Washburn Rural (35-17), and Topeka West (41-0). Khoury is averaging 245 yards passing per game and has only thrown one interception so far in 71 passing attempts. Qua’Vez Humphreys has also had a huge year as he has 13 catches for 326 yards and four touchdowns as the favorite target of Khoury.

Khoury, who is a multiple sport athlete, is a standout baseball player as well. As a sophomore last season he earned all-league and all-state honors after hitting .443 as an outfielder that also pitches. He was also an Academic All-League selection as he carries a perfect 4.0 GPA.

Junction City also features key players Russell Wilkey, Ethan Alcorn, Antonio Cooper, Terrance Crumpton, and Kazerick Smith. Their biggest test of the season will come this Thursday as they take on Topeka High (3-0) at Hummer Park. Topeka is highly regarded with several Division I talented players, including Minnesota commit Ky Thomas, and many think they could even reach a 6A title game this season.

For now, Khoury and Junction City are focused one week at a time as they try to knock off Topeka tomorrow. We caught up with the breakout junior athlete below in the latest Q&A edition of Faces in Kansas.

This feature is presented by FLINT HILLS OB/GYN PA, of Junction City, KS. Proud to support the Bluejays

How did you get involved in football?  Junction City has a youth football program called Jr. Jays and I have been playing football ever since I started that in 3rd grade.

What are your goals this season? My team goals are to win the Centennial League and make a deep run in the playoffs. My individual goals are to throw for 2,000 yards and 25 touchdowns.

What makes you such a force as a player? I think that my smart decision makings, my throwing ability, and my competitive nature.  I am going to compete from the very first play to the very last play and do everything to win.

The atmosphere in are stadium is electric and like no other.  The community comes together to make sure that our Friday nights are great.

For anyone that hasn’t seen one of your games, why come to one?  They should come to one because we put on a show every game and we are an exciting  team to watch play.

We are talented everywhere on both offense and defense.

Throwing a touchdown and celebrating with my teammates after a win.

I play baseball as well.  I have been starting in the outfield since freshman year. I also pitch.

It has been an honor to play for Coach Zimmerman.  He is one of the best to ever do it in Kansas.  He pushes us every day and teaches us discipline so we can become better athletes and people.

We lifted 3 times a week and had football once a week every week this summer.  We would also put in work outside of the team lifting and football as much as we could.

I am wanting to play at the next level and I’m going to wait to see how everything turns out.  I am going to work as hard as I can to put myself in the best possible position.

My favorite thing to when I am not playing sports is hang out with my friends and have a fun time.

I see myself graduating from college and starting a career in business if I am not involved in sports.

My favorite subject is algebra.  I work hard and am a motivated student. I have a 4.0 GPA.

My role model is Ryan Henington.  He is a Junction City graduate and now a Quarterback at K-State. I have always looked up to him because he pushes me to the best possible football player.

Stacy’s Restaurant has the best breakfast in Kansas!

I am the only person in my family that has played football.

I am a Christian and nothing can come before god.