v Behind the Scenes in KS: Austin Barone & Andy Wachter - Sports in Kansas 
Warning: include(../includes/bodytag.php): failed to open stream: No such file or directory in /home/kansass/public_html/ks/news/index.php on line 36

Behind the Scenes in KS: Austin Barone & Andy Wachter 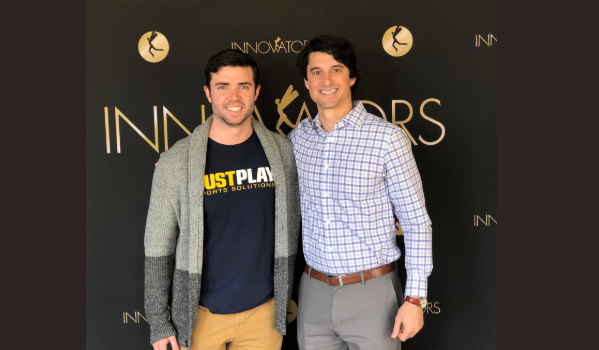 A game-changing innovation into the logistics of team operations is being run by a pair of tech entrepreneurs in Kansas.

Just Play Sports Solutions, which according to its website provides “playbook, scouting and teaching tools for football, basketball and lacrosse.”

The two founders of Just Play, Austin Barone and Andy Wachter, have aggressively pursued the company’s dream of streamlining the logistics of athletics through technology.

“It’s really broken down into a simple statement. In athletics, we’re facing a technology disconnect between coaches and players,” Barone said. “As a coach continues to get older, the players are staying the same age. As technology continues to be a beneficial teaching tool in the education space — you’re seeing computers and tablets be prominent in classrooms — when they go to football or basketball practice, they’re getting three-ring binders and printouts with scouting reports and playbooks.”

Barone is a former kicker for the Kansas Jayhawks and birthed the idea for Just Play while observing how coaches disseminated scout and other vital information to players on and before gameday.

“Step 1 was realizing the disconnect,” Barone said. “When I walked into the Kansas locker room, you see 120 guys on their phones. Then when it was time to go to a meeting, they’d put their phone away and pick up a binder. Nobody wants to carry around a massive binder when they’re so used to consuming everything on their phone.”

Just Play allows coaches to upload scouts, installs and other imperative information onto its app which then gives players access. Barone says a primary advantage this provides teams is giving coaches opportunities to players to view content prior to the start of practice or walkthroughs.

“Additionally, coaches can save that scout content along with any other information with players before practice so the players can engage with that. You’re front loading your learning upwards of 24 hours before you have a meeting about it. That gives players ample time to understand it,” Barone said.

“A substantial percentage of that is in the college space, about 70%. We do some stuff in the professional space, high schools and international as well,” Barone said.

“It’s been a great experience for us to be able to work with teams in Kansas and stay close to home. It’s been a ton of fun to really feel a part of a program,” Barone said.

Another client that recently gained international glory is the national men’s basketball team in Spain, which won the gold medal at the 2019 FIBA World Cup on Sunday, September 15.

“It’s been a great resource for them,” Barone said. “They’re able to get their team up to speed with regards to strategic content. All of that was utilized on our platform. They use the platform every day. And we’ve had multiple inquiries from Spanish coaches and teams come in over the last couple weeks who all said they heard great things from the Spanish team.”

Barone himself is a 2012 graduate of St. Mary’s Colgan High School in Southeast Kansas. He then graduated from KU with a bachelor’s degree in science and accounting, while his co-founder Wachter, also a Colgan alum, graduating in 2002, played basketball at both Wichita State and Pittsburg State, holds a master of science and technology from Pittsburg State. Wachter was previously with Sony Pictures Entertainment priot to Just Play.

“We started this company and I was still going to school,” Barone said. “From a time management standpoint, being a part of an athletic program really helped. Being a part of a football team is similar to being part of a big company. Your head coach is your CEO. Your coordinators are your managing directors, and so on. All the players are employees. It helped me have a grasp of what that feels like.”

Just Play also has a handful of high school clients and a variety of price points to meet the needs of its different users.

“We have a variety of price points ranging anywhere from $10 per month for the everyday coach that wants to have a personal place to store their playbook, all the way up to $25,000 a year for a professional franchise that needs a much broader feature suite. We try to find the package that works for each program,” Barone said.

Going forward, Just Play hopes to integrate more sports to make them compatible and expand the business. Soccer, field hockey, hockey and volleyball are among the sports on Just Play’s immediate horizon.

“We’re still evaluating that ourselves as far as the actual timeline. The more similar one sport is to one of the sports we have now, the faster our company can go into it,” Barone said.

Ultimately, Just Play’s mission has been to bring coaches and athletes in line with the latest developments in technology, which has players constantly on their smartphones checking social media and consuming their content.

“We see a vision in helping every coach and every athlete,” Barone said. “We’ve had a lot of success in the college space and pro space, but there’s a lot of market to continue to go capture.”

Chet Kuplen, founder/CEO of Sports in Kansas, has also seen the growth of this company from the outside.

“These guys are helping coaches, players and teams get better all over the country. It’s amazing how big the sports tech industry is out there and how valuable some of these companies are in a game-changing experience for their users. I’ve heard nothing but great things about it from the people I interact with across Kansas. Andy has done all of the website work we use at Sports in Kansas and does incredible work. It’s pretty cool that a couple of small-town guys from Southeast Kansas have done what they’ve done. It’s not easy to go out and create something on your own, so I have a big appreciation for what they’re doing.” Kuplen said.

You can find more info on Just Play Sports Solutions here at their website.