v Around the Classes: Week 2 Recap - Sports in Kansas 
Warning: include(../includes/bodytag.php): failed to open stream: No such file or directory in /home/kansass/public_html/ks/news/index.php on line 36

Around the Classes: Week 2 Recap 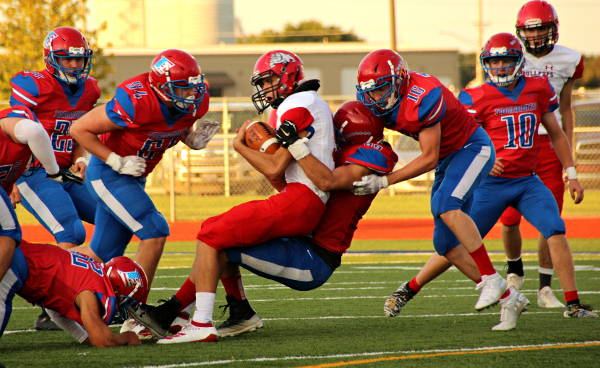 Wichita West ended a 14-game losing streak against Kapaun Mt. Carmel and defeated the Crusaders, 34-0, in City League action. The Pioneers had not defeated Kapaun since 2000 and lost 6-0 in a game last year where they had negative yards of offense. West’s defense limited Kapaun to 22 carries for 11 yards, and an inefficient passing game that was 10 of 24 for 141 yards with no touchdowns against one interception. West had a 16-8 edge in first downs, though had nine penalties for 110 yards. It marked the first time Kapaun had been shutout since a 24-0 loss to Wichita Southeast in Week 2 of the 2012 season, according to Kansas Football History. Kapaun had opened 4-0 in each of the last two years.

Junction City improved to 2-0 after a 35-17 victory over Washburn Rural. The Blue Jays led the Junior Blues 19-14 after the first quarter, then outscored Rural 16-3 in the second half.

Dodge City improved to 2-0 for the first time in three years after a 45-7 win over Salina South.

The Red Demons built a 28-7 lead by halftime thanks to three Beau Foster touchdown passes in the second quarter. Foster connected with Matt Friess on a pair of scores and De’Jon Delgado on another. Delgado then returned an interception for a long touchdown in the third quarter.

Wichita South held on for a 27-25 victory over Wichita Southeast. The Titans got another solid game from senior Jashun Grant. Grant passed for 144 yards and also rushed for 65 yards and three touchdowns. Antoin Alston added a touchdown run, while Jordan Huggins rushed for a team-high 105 yards.

KC Washington improved to 2-0 with a 33-12 victory over KC Harmon. The Wildcats used a pair of quarterbacks in the win with Thomas Anderson rushing for a pair of scores and Cory Macon passing for more than 150 yards and a touchdown. Kyren Angelo added more than 100 yards on the ground with a score. Tywan Muturi picked off two more passes to push his two-game total to five.

Emporia has opened 2-0 with a 48-6 win against Topeka West. John Miller tossed a 17-yard touchdown pass to Andrew Wendling. Following an interception, the Spartans bumped the lead to a 14-0 lead on a nine-yard run from Connor Hoyt. Then, Wendling had a 63-yard scoring run in the first quarter. Emporia led 34-0 late in the third quarter.

Newton won at Haysville Campus, 27-24 in double overtime on Friday. Both teams lost fumbles on their first overtime possession. Campus kicked a short field goal in the second overtime to go up 24-21. Newton scored the game-winner on a touchdown pass from Ben Schmidt to Gavin Cusick. Schmidt passed for 240 yards and two touchdowns and also added a touchdown run.

Valley Center built a 24-12 halftime lead and held off Garden City, 38-26. The Hornets were led by junior Marion Ponds’ 152 yards rushing with three touchdowns. Kaleb Harden added 151 yards passing with a pair of touchdown passes as well. Caden Holle hauled in three receptions for 92 yards and a score.

Tanner Cash threw a 6-yard touchdown pass to Trace Tjaden early in the fourth quarter to propel Clearwater to a 13-12 won over Mulvane. Cash completed nine of 25 passes for 119 yards and that winning touchdown, but also added 131 yards rushing and a score on the ground. Cole Diffenbaugh led Mulvane with 128 rushing yards and a score.

Tonganoxie went on the road and completed a dominating 42-6 win at Louisburg. The Chieftains showed incredible balance on offense in rushing for 275 yards and passing for 220 more. Cooper Cunningham rushed for 140 yards and a score while also catching a touchdown pass. Junior Blake Poje passed for 220 yards connecting with Elijah Tyner on three passes for a team-high 105 yards. Tyner added a pair of rushing touchdowns.

Columbus moved to 2-0 on the season with a 53-28 victory over Coffeyville-Field Kindley. The Titans built a 33-14 lead at halftime then added 20 additional points in the third quarter. Quarterback Patrick Cassidy passed for 150 yards and three scores and added a pair of rushing touchdowns. Clay Saporito led Columbus with three catches for 91 yards and a touchdown. Gabe Martin added 122 rushing yards and two scores.

Andover Central forced a pair of safeties and scored a defensive touchdown on a fumble return by Trey DeGarmo as part of their 33-2 victory at Goddard-Eisenhower. Shomari Parnell rushed for a touchdown and Xavier Bell tossed a long touchdown pass to Matthew Macy on a reverse pass for the Jaguars. Andover Central is 2-0 and has a big showdown this week against second-ranked Goddard.


Caney Valley shutout Eureka, 24-0, in a game played at Chanute. Eryk Kyser and Ben Nunneley each rushed for touchdowns for the Bullpups. Trey Richey added Caney’s other score in the fourth quarter with a short fumble return for a touchdown.

After a season-opening loss to Larned, Smoky Valley bounced back for an 8-0 victory against Haven. Andrew Peters tallied a nine-yard run with 1:14 left in the contest for the game’s only score. The Vikings outgained Haven, 252-204. Trey Kennedy led Smoky Valley with 18 carries for 79 yards.

Hesston moved to 2-0 with a 26-18 victory against Larned. Jacob Eilert had 156 passing yards and a score, and rushed for 48 yards and three touchdowns. Dillan Smith threw for 169 yards and a pair of scores, and Mason Perez rushed for 88 yards and a touchdown. Eilert’s two rushing touchdowns gave Hesston a 12-0 lead before Larned scored with 49 seconds left in the first half.

Halstead defeated Pratt, 36-14, with 22 straight points. Scott Grider rushed for 78 yards and a pair of touchdowns, and Doug Grider forced a safety.


In a key NCAA contest, Southeast of Saline defeated Beloit, 20-12. SES is 10-2 in its last 12 contests. Beloit led 6-0 after the first quarter, but SES tied the score at 12 at halftime. After a scoreless third quarter, SES tallied a fourth quarter TD for a 20-12 lead. Junior Jaxson Gebhart completed 15 of 23 passes for 134 yards. Junior Bryant Banks delivered 11 carries for 21 yards and a pair of scores, and Gebhardt finished with 16 rushes for 62 yards and a touchdown. Gebhardt and Eli Harris both picked off a pass and combined for 81 yards of interception return yards. Gebhardt finished with 10 tackles and also recovered a fumble. Sophomore Matthew Rodriguez led with 12 tackles. SES is 4-1 in the last five meetings in the series, including a 14-13 victory last year.

Minneapolis rolled over Sacred Heart, 54-7, as the Lions opened 2-0 for the second straight season. Last year, though, the Lions defeated Sacred Heart, 20-17, in overtime. Minneapolis recorded 417 yards of total offense, and limited the Knights to minus-1 yards of rushing offense.

Mission Valley moved to 2-0 with a 42-28 victory against Wabaunsee. Colby Stowe threw four touchdown passes to four different receivers: Will Blythe, Trenton Parks, Dawson Logan and Carter Phillips. Stowe finished 6 of 9 passing for 129 yards and four scores. Phillips finished with six rushes for 137 yards and a touchdown. A.J. Rubio was six of six on extra points, and Jake Benortham recorded his second pick of the season.

“A big night for the Centralia O-Line.” That was how Centralia’s Kamble Haverkamp explained his night for the Panthers in a 54-32 win over Riley County. The senior quarterback had 32 carries for 200 yards and 6 touchdowns, a record-setting performance as the Panthers moved to 1-1 on the season. Next up, the Panthers continue their tour of the Mid-East League against St. Marys (0-2).

Elkhart earned the first win of the Jhon Haehn era with a 34-20 victory against Southwestern Heights. Elkhart led 7-0 after the first quarter, 14-6 at halftime and 28-12 after three quarters. Senior Emmanuel Moreno completed all three of his passes for 55 yards with a touchdown. Senior Chace O’Hair delivered 20 rushes for 173 yards and three touchdowns. Senior Jaxon Hastings had two catches for 52 yards and a score. Senior Demetrio Flores had 23 carries for 162 yards and two scores. O’Hair and Moreno led Elkhart with 16 and nine tackles, respectively, and O’Hair recorded one of the team’s four tackles for loss.

Ell-Saline earned a 40-0 win against Whitewater-Remington. Luke Parks rushed for 101 yards and two scores as the Cardinals led 26-0 at halftime. T.J. Morrical passed and rushed for a score, and delivered 43 passing and 55 rushing.

Sedgwick beat Wichita Independent, 61-6. The Cardinals led 54-0 after the first half. Lance Hoffsommer completed 14 of 17 passes for 225 yards and five scores. Nose guard Kolby Hutton finished with five tackles and a tackle for loss. Linebacker Gannon Resnik recorded seven tackles, including a tackle for loss. Kicker Connor Tillman went seven for seven on extra points and made a 42-yard field goal. Tillman is playing with a brachial plexus injury and a broken wrist. Defensive end Colby Mertens had seven tackles, three for loss. Senior Kale Schroeder cleared 2,000 career receiving yards in the win.

La Crosse moved to 2-0 and defeated Class 3A Russell, 14-12, after a big loss last season. The game was scoreless after the first quarter, but the Leopards led 8-6 at halftime and 14-6 after the third quarter. Sophomore Colby Stull delivered 16 carries for 124 yards and two scores. Five players caught a pass, as La Crosse finished with 11 receptions for 131 yards. Senior Michael Showalter enjoyed a big game with nine tackles, three for loss.

After its big Week 1 victory against Central Plains, Ness City improved to 2-0 with a 46-0 victory against Macksville. Hector Rodriguez rushed for 160 yards and Jose Guzman’s 23 passing yards all went to Easton Seib. Ness City ran 43 plays for 285 yards, and Macksville finished with 57 plays for 132 yards. Ness City led 16-0 after the first quarter when Rodriguez had a 13-yard run, and Seib hauled in a 14-yard touchdown pass. In the second quarter, Rodriguez delivered a 53-yard scoring run, and Seib caught a nine-yard scoring pass. In the third, Guzman delivered a 23-yard scoring run, and he added a 27-yard touchdown run in the fourth.

Argonia-Attica led 37-0 at halftime and defeated Central Burden, 69-24. A&A scored on all five possessions of the first half. In the first half, Mason Miller had a scoring run of two yards, a receiving touchdown of 28 yards, and a 68-yard run. A&A also blocked a punt that set up a two-yard run from Noah Phillips. Blake Shaddox recorded a 15-yard pick-six.

Caldwell defeated Flinthills, 52-6. The Bluejays led 22-0 in the first quarter and led 36-6 at intermission. Caleb Noyes finished with 60 passing and 78 rushing yards. He accounted for four scores. Jude Snow delivered 125 rushing yards, and Noyes returned a punt for a touchdown.

Pratt-Skyline scored all 24 points in the second half of a 24-8 victory over Kiowa County. Senior Eli Temanson rushed for 155 yards and a touchdown to lead Skyline. Quarterback Braden Tyler added 83 rushing yards and threw a 30-yard touchdown pass to Jesus Casas. The Thunderbirds extended their win streak to four games – the current longest streak in Eight-Man, Division I.

Beloit St. John’s-Tipton picked up the first victory of the Dean Gengler era with a 66-42 road win against Linn. For Linn, senior Jace Schaefer completed 12 of 24 passes for 192 yards with four scores. Senior Ricardo Cardenas finished with 16 carries for 104 yards and a score.

Logan-Palco moved to 2-0 with a 32-30 victory against Wheatland-Grinnell. The game was scoreless after the first quarter, and Logan-Palco took a 6-0 lead with 3:40 remaining in the first half. The Trojans led 18-16 at halftime. Sophomore Dylan Van Laeys went 9 of 13 for 113 yards and two touchdowns. Four players had between 44 and 89 rushing yards as Logan-Palco finished with 43 carries for 260 yards and two scores. Junior Micah Thompson rushed 20 times for 89 yards and a touchdown, and a score, and Van Laeys finished with seven carries for 44 yards and a score.

Mankato-Rock Hills had another huge offensive performance and moved to 2-0 under coach Colby Hamel with a 66-20 victory against Lakeside-Downs. Rock Hills led 22-0 after the first quarter, 36-6 at halftime, and 58-20.