v What impressed us after week two of 2019 fball season? - Sports in Kansas 
Warning: include(../includes/bodytag.php): failed to open stream: No such file or directory in /home/kansass/public_html/ks/news/index.php on line 36

What impressed us after week two of 2019 fball season? 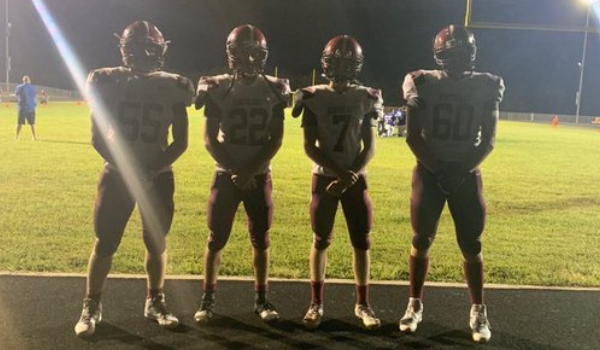 No. 1 Derby shutout Salina Central for the third straight season with a 49-0 victory. Senior Tre Washington rushed for 136 yards and four scores, and Grant Adler had another big game with 16 of 20 passing for 318 yards. Derby’s defense limited Salina Central to minus-6 rushing yards on 25 carries, according to the Derby Informer. Derby had a 99-yard drive in the first half and led 35-0 at halftime.

Ky Thomas rushed for 294 yards and four scores, including the winning touchdown with 1:21 left as Topeka defeated Manhattan, 32-27, in a key Centennial League contest. Last year, Thomas had been ruled short on the potential game-winning two-point conversion in a 21-20 loss to Manhattan. Thomas continues on pace to become the all-time rusher in city of Topeka history, and Topeka continue to cement itself as a strong 6A contender.

Blue Valley defeated Blue Valley North, 34-7. BV was ranked No. 5 in Class 6A in the preseason but then took a big loss to St. Thomas Aquinas, ranked first in 5A, last week. BVN played Bishop Miege (No. 1 in 4A) close in Week 1. However, Blue Valley was expected to be much improved after a rare 4-5 season last year. Jake Wolff, a highly regarded prospect in his first season as the starting quarterback, cleared 200 yards passing and accounted for four scores.

Lawrence was 1-8 in ’18 and is 2-0 this year after a 30-7 victory against Shawnee Mission East. SME dropped to 0-2 after a Week 1 loss to Gardner-Edgerton, ranked in Class 6A. Steve Rampy, one of the state’s all-time great coaches, has led the Lions to a 31-21 victory versus Olathe South and Friday’s win. Lawrence is at Gardner-Edgerton, 2-0 and ranked No. 2 in Class 6A behind Derby, in a key matchup in Week 3.

Maize South continues to climb as a contender in 5A and has flipped both of its results from 2018. The Mavericks opened 0-3 in ’18 and finished 6-4. This season, MS is 2-0 with quality wins against Wichita Heights (a comeback) and Andover. On Friday, the Mavericks defeated Andover, 14-7, as Colin Shields threw a pair of short touchdown passes. Trevion Mitchell is the real deal and playing like one of the top defensive backs in all of Kansas.

De Soto had 419 yards of total offense with 214 rush and 205 passing. The Wildcats rushed for four scores, and passed for five, and Eli Gratz made a 37-yard field goal. De Soto won at KC Wyandotte, 66-14.

McPherson required a comeback at Salina South in Week 1 and delivered a 29-17 victory. The Bullpups’ defense delivered a shutout in a 47-0 win against Winfield in Week 2.

Andover Central defeated Goddard-Eisenhower, 33-2. AC stands at 2-0, and wide receiver Xavier Bell had a great 50-yard touchdown on a reverse. Bell is also a Division I basketball recruit.

The Frontier League is off to a strong start with Paola, Tonganoxie and K.C. Piper are all 2-0. Spring Hill, which upset Louisburg in Week 1, is also off to its first 2-0 start in more than 10 years. Defending league champion Louisburg is 0-2. Tonganoxie opened with a 49-28 victory against Basehor-Linwood in Week 1, and then held off Louisburg, 42-6, last night. Paola rolled over Fort Scott, 58-0.

Pittsburg’s Shay Mahnken finished with 14 carries for 206 yards and four touchdowns as the Purple Dragons’ fullback.  He is a powerlifting state champion. Mahnken started on the defensive line last year. Pittsburg, ranked in the top-5 in 4A, beat a quality Chanute team, 41-27. Chanute QB Ty Bowman is also a very solid football player to keep an eye on. Pittsburg offensive line, led by Sam Herring, was a solid, solid unit last night.

No. 1 Bishop Miege had little trouble with Blue Valley West, which pulled a Week 1 upset against Mill Valley. Miege won 48-21 and led 41-14 after three quarters. Brison Cobbins rushed for two touchdowns, and accounted for another one. Tim Dorsey accounted for five touchdowns. Phillippe Wesley has earned a KU scholarship offer.

Mason Thrash has been all over the place with 25 tackles for McPherson. KSU committ Cody Stufflebean already with three sacks. Bryson Labertew has 19 stops on the year for the very solid McPherson HS defense led by Chet Harlin, defensive coordinator.

Wamego’s Isiah Childs, a transfer from Manhattan and an Akron commit, has helped the Red Raiders start 2-0. He has rushed for 443 yards and six touchdowns this year.

Marysville’s Atreyau Hornbeak rushed for 176 yards and seven touchdowns (school record) as the Bulldogs defeated Clay Center, 56-31. Marysville is ranked in the top-5 in Class 3A, and Hornbeak has cleared more than 1,000 yards of total offense in the last two seasons.

Halstead’s Carter Hiebert recorded a pair of pick-sixes as the Dragons defeated Pratt, 36-14.

Galena sophomore quarterback Brett Sarwinski has thrown for 532 yards in two starts with 300 yards passing in Week 2. Three receivers cleared 70 yards. Galena, a semifinalist in ’18, has outscored opponents 106-22 in the last two weeks with wins against Riverton and Girard. Bulldogs are now 24-2 since the start of the ’17 season. Galena won at Girard, 48-14. Nick Sarwinski has over 230 yards recieving so far in 2019.

Columbus has already had a big bounce back after a rare 1-8 season last year. The Titans stand 2-0 behind coach Blake Burns. The Titans defeated Pitt-Colgan in Week 1, and beat Class 4A Coffeyville (53-28) on Friday. Patrick Cassidy had five scores in the game. Gabe Martin is also one of the top two-way sophomores in 3A this season.

TMP captured the Ellis County rivalry against Ellis in what is typically a very close game. The Monarchs have won three straight in the series, including 14-7 in ’18 and  19-16 this season. Bryce Seib scored the winning touchdown.

No. 5 Scott City has traditionally had an excellent defense, including the No. 2 scoring defense in 3A last year.  SC has allowed just three points in two games and beat Holcomb, 14-3, on Friday.

Like SC, Colby is off to a 2-0 start in the Greater West Activities Conference. The Eagles have permitted just eight points in two contests with a 36-0 road win versus Ulysses, and 16-8 at home versus Hugoton on Friday.

Three of the top-five teams in Class 2A lost, and Riley County, just outside the top-5, also fell. No. 1 Phillipsburg and No. 3 Conway Springs lost to Plainville (No. 2 in 1A) and Cheney (unranked), respectively. As well, No. 5 Silver Lake edged No. 4 Rossville, 14-13, in the annual War on 24 rivalry. Riley County, the defending state runner-up to Phillipsburg, lost to Centralia, just outside the top-5 in Class 1A.

Cheney rolled over Conway Springs, 49-19, in a huge upset. Riley Petz had a big game for Cheney, which was 2-7 last fall. It marked CS’ first regular season loss since ’16.

No. 2 Hoisington avoided any upset possibilities with a 40-13 win against Nickerson. While Wyatt Pedigo is normally the star of the offense, this time Mason Haxton threw for four touchdowns.

No. 5 Silver Lake and No. 4 Rossville were tied at seven at halftime. However, SL moved to a 14-7 advantage on a 22-yard touchdown pass on fourth down from Cody Hay to Jay Kellner. Rossville scored quickly, but SL, which had significant graduation losses on offense last year, picked off the Bulldogs in the final 90 seconds and sealed the victory.

Nemaha Central had a close loss to No. 1 3A Sabetha in Week 1, and then rolled over Hiawatha, 52-27, on Friday. Andrew Leonard hauled in five touchdowns from Dylan Schultejans.

Arma-Northeast won 36-0 at Yates Center for the program’s first on-the-field win since 2014. Congrats to David Pitts and the rest of the team. The Vikings did get a win last year but it was in a game they didn't have to play in as Oskaloosa forfeit so we still counted this as ending a 30-game skid!

Casey had more than 180 yards of total offense, and Finnesy bounced back from a tough first half. Ty Sides had a solid game for the Panthers with a passing and rushing score. Plainville has comeback in each of its first two conteests.

While Finnesy/Casey have a lot of attention, the Cardinals have received strong efforts from a lot of its supporting cast. Sophomore Ben Hansen forced a fumble on the kickoff after the Finnesy score to secure the win.

Centralia’s Kamble Haverkamp rushed 32 times for 200 yards and six touchdowns as the Panthers defeated Riley County. Centralia played Rossville to a solid game in Week 1, and will again be a Class 1A contender.

La Crosse, 3-6 last season, has opened 2-0 in its last year of 11-man football. The Leopards flipped a Week 2 result from last year with a 14-12 win against Russell. La Crosse fell by 38 points to the Broncos in ’18. La Crosse key lineman Kalen Thielenhaus is out for the season.

Coldwater-South Central’s Gage Girk made a 47-yard field goal for the Timberwolves, the longest eight-man field goal in the country. Two years ago, he kicked a 46-yarder. Girk has either been first team  all-state kicker or defensive back in back-to-back falls. Girk has 11 interceptions and 20 in his career. SC moved to No. 4 in Division I this past week and had a shutout over a solid Spearville team.

Victoria has outscored its first two quality opponents, Otis-Bison and Central Plains, by a combined score of 92-28. The Knights ran out to a 42-0 lead in Week 1, and then defeated Central Plains, 50-14, at home. Quarterback Grant Schoenrock cleared 200 rushing yards in Week 2.

Hodgeman County running back Eli Salmans delivered 26 carries for 185 yards and three scores in a 48-28 win against Medicine Lodge. HC is ranked No. 3.

Oswego beat Marmaton Valley, 50-0, with a 30-point second quarter. Oswego again had a balanced effort with four players rushing the ball and two players throwing a pass. Overall, Oswego averaged 8.1 yards per carry for 194 yards rushing, along with 5 of 5 passing for 93 yards and a pair of scores. Jace Wilson rushed and passed for two scores apiece. He had 77 rushing yards and 47 passing yards, both team-highs.

In a unique game, St. Francis defeated Holly (Colo.), 62-0. The Indians, ranked second  in the classification, had to travel out of state – though just a few miles from the border – after Greeley County was unable to play its Week 2 contest.

The game was played on a 100-yard field as opposed to the normal 80 yards in Kansas. As well, the game had no 45-point mercy rule, and a running clock for the remainder of the game for anytime after a 40-point lead. SF has yet to allow a point this year.

No. 3 Osborne recorded its second straight big victory against a quality eight-man opponent with wins against Hill City and Hoxie (54-26). The Bulldogs led 18-0 after the first quarter and 40-6 at halftime. Osborne ran just 38 total plays, 31 fewer than the Indians. Senior Darrien Holloway had 10 carries for 157 yards and three touchdowns, while sophomore Mason Schurr recorded seven carries for 57 yards and three scores.

Senior Steele Wolters finished with 12 carries for 87 yards and a score. Sophomore Ashton Dowell threw for 193 yards for Hoxie, and senior Wylie Weems was limited to 31 rushing yards, though had 83 through the air.

Mankato-Rock Hills continues to roll under new coach Colby Hamel, and now gets Hanover at home in a marquee matchup on Friday. Hanover has won 40 straight games, one off the all-time eight-man wins record in the KSHSAA era set by Almena-Northern Valley in the ‘80s. Hanover defeated Doniphan West, 44-8.

Rock Hills has rushed for 1,100 yards. Rylee Whelchel has 602 rushing yards and 12 scores, and Mason Higer has delivered 330 rushing yards with three scores. Rock Hills has played just five quarters this season and stand 2-0 with a collective margin of 144-48.

Bird City-Cheylin’s Colton McCarty recorded another big game with nine carries for 194 yards and three scores. He was 9 of 11 passing for 139 yards and three touchdowns, and also had a 60-yard punt return. Drew Schields delivered six catches for 116 yards and two scores, along with six tackles, a forced fumble and a fumble recovery. The offensive line has blocked for 915 yards through only four  quarters of football.