Ethan Houk has been named Labette Bank Athlete of the Month from Southeast Kansas. 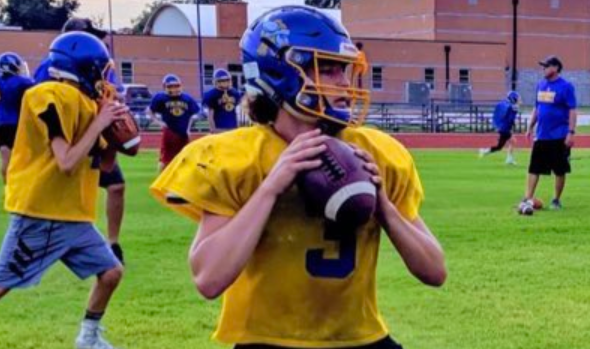 The Labette Bank Athlete of the Month in Southeast Kansas from Sports in Kansas for their play to open up the 2019 football season is Parsons High School junior Ethan Houk.

Houk helped lead the Vikings with five total passes and two rushing touchdowns for seven combined touchdowns on Friday at home over the Iola Mustangs in a five overtime win. Houk, in his first start as a varsity quarterback, passed for 244 yards and rushed for 50 more on the night.

Dariq Williams, a senior receiver, was also huge in the PHS win as he had five touchdown receptions and 203 yards receiving. One of those catches was the game winner from score from Houk in the fifth overtime.

Parsons had 359 yards of total offense in the win. The Vikings, led by head coach Kurt Friess, went 8-3 last season and won their first playoff game in 42 years as they captured two playff wins in 2018. They will be back in action this week as they face Anderson County.