v Faces in KS: Sloan Hayden - Sports in Kansas 
Warning: include(../includes/bodytag.php): failed to open stream: No such file or directory in /home/kansass/public_html/ks/news/index.php on line 36

Sloan Hayden is ready for a big 2019 season since moving to Eudora. (photo 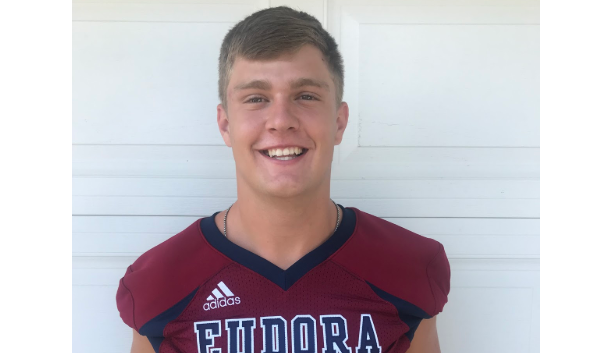 Eudora High School senior Sloan Hayden is ready for a breakout 2019 football season. The senior transfer that played last season at Ulysses High School, 387 miles apart, is also one of the top tight end and defensive end recruits in the state for the class of 2020.

Hayden, a 6-foot-5, 230-pounder, came to Eudora to play for his older brother, Sean, the head football coach at the high school. Last season, Sloan was a first team All-GWAC defensive end for Ulysses HS and also honorable mention on the offensive side after 358 yards receiving on 29 receptions for two touchdowns.

Not only does Hayden have the size, he’s also a good blocker with great hands at the tight end position. Moving close to the KC metro area will also provide a little more exposure than what he’s used to in small town western Kansas for recruiting purposes. That has landed him several opportunities at the next level where he has committed to play at Division I FCS program Missouri State in Springfield, Missouri.

It will also be a special season for head coach Sean Hayden and Sloan to spend the season together as brothers on the same team. Eudora, who struggled to a 1-8 record in Hayden’s first year last year, is ready for much improvement with seven returning starters on offense and eight on defense. They open up the 2019 campaign against fellow 4A Frontier League opponent KC-Piper at home.

We caught up with the talented senior below in the latest Q&A edition of Faces in Kansas.

This feature is presented by K&S Farming, LLC. Proud to support Sloan Hayden and best of luck to the Eudora HS Cardinals this year

I’ve always had a football in my hand but I started to play organized football when I was in the 3rd grade.

To win the league title and a state championship with my team.

Our  goal is to get better every game and be playing our best football come playoffs.  We feel we can compete with any team in the state if we keep getting better every day.

As a tight end, you have to be a good blocker as well as catching the ball so I feel like I do pretty well with both of those.

I haven’t gotten the opportunity to play in front of the Eudora crowd but I heard the feeling is one of a kind because the community is behind the team and it feels like something special.

We are going to play hard and be disciplined as a team.

I love the limited amounts of opportunity you get to play the game so you have to make the most of every rep you get.

I play basketball and I do track. In basketball I am more of a Power Forward/Center type of player. In track this last year I threw the javelin and discus and I ran the 200m.

What is it like to play for your coach/brother?

With the opportunities to play under him this summer, I can see that he wants what is best for all of his athletes and he puts us in the best position to succeed on and off the field.

We participated in a few padded camps this summer with a few league schools and we did pretty well, we also hit the weight room pretty hard. We did a community service project and we had a US Army recruiter help us with becoming a better teammate. We also had a youth camp that we helped put on.

I am committed to play football and continue my athletic career at Missouri State.

I like hanging out with my friends and my family.

I hope to still be playing the game of football but if not I probably want to be a coach.

I really like Social Studies, I have a 3.6 GPA I think i’m a really great student.

I look up to my sister Tyra and my brother Sean.

I love to go eat Jeffersons down on Mass Street in Lawrence.

I don’t live with my parents, they allowed me to move in with my brother and sister in law to play football under him for my senior year.

I want to thank you for checking out my story and I hope you keep up with the Eudora Cardinals this football Season.