Conor Haviland had an all-state season one year ago for the Cubs of Humboldt. (photo: Mike Myer) 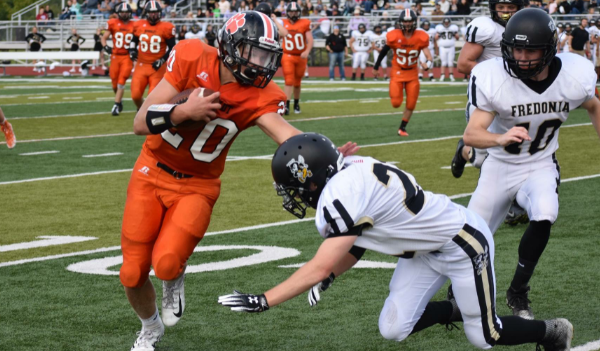 Each week Conor Nicholl and Chet Kuplen will highlight games for Sports in Kansas heading into Friday night and then a full recap on Saturday mornings. This coverage is presented by Kansas Turf, American Implement, Nex-Tech Wireless, Labette Bank, Craw-Kan, Rainbow Communications, Rack Performance and the Kansas Collegiate Athletic Conference.

Thursday games: Can Goddard show offensive improvement? Can Inman have a strong year without Matt Ramey?

The 2019 Kansas high school football season opens with two games on Thursday night. Class 1A Inman is at 2A Belle Plaine, while returning 4A runner-up Goddard heads to plays host to Wichita East. Goddard is ranked No. 2 in 4A.

Inman was one of the biggest surprises in 2018. The Teutons bumped from 0-9 to 6-4 under coach Lance Sawyer. However, running back Matt Ramey transferred to nearby McPherson after he cleared 1,000 rushing yards. Inman won this contest, 37-36, in overtime last year, the first of two one-point victories.

Goddard beat Wichita East, 32-8, in the 2018 season opener and eventually finished 10-3 with a 4A runner-up showing to Bishop Miege. The Lions’ defense should again be elite, though the offense committed 27 turnovers last season. Goddard permitted just 16.7 points in ’18, and returns Zeke Howell (18 sacks) and Dhimani Butler (106 tackles), among other key players.

6A Shawnee Mission East at No. 3 6A Gardner Edgerton – Last year, Ryan Cornelsen led G-E to a 28-23 upset victory against Shawnee Mission East in his first game with the Trailblazers. G-E eventually went from 0-9 to 10-1 and achieved the biggest one-season turnaround in Sunflower League history. G-E returns plenty of talent, including quarterback Teven McKelvey (South Dakota commit) and lineman Talor Warner (Kansas State) for the state’s top rushing attack in ’18. SME finished 8-3 under first-year coach Justin Hoover, a nationally known quarterback guru and former offensive coordinator at Miege. The Lancers lost three games by a combined 14 points. Either Ryan Biling and Price Terrill is expected to start at quarterback.

5A No. 3 Bishop Carroll at 5A No. 2 Wichita Northwest – This is a key game to determine the City League and Class 5A West rankings. Northwest defeated Carroll, 23-22, in the season opener on a last-second field goal and then 84-67 in the playoffs. Northwest was 12-1, Carroll 8-3. NW had big graduation losses with running back Breece Hall (Iowa State) and defensive end Marcus Hicks (Oklahoma). However, Reagan Jones, a Missouri Western commit, is one of the state’s top quarterbacks and specialists. He accounted for 51 touchdowns. Carroll quarterback Aiden Niedens was honorable mention all-league. The last three games in this series are by a combined 23 points.

How does Henry Martin fare against the Miege juggernaut?

6A No. 2 Blue Valley North at 4A No. 1 Bishop Miege – BVN captured the 6A title in ’17 and was second last year with quarterback Graham Mertz, now at Wisconsin. Miege won this contest, 33-21, last season to open Eastern Kansas League play. The five-time defending champion Stags return a bevy of key players, including running back Brison Cobbins and lineman Brian Burns (Harvard commit). Senior wide receiver Daniel Jackson (Minnesota) is back after he missed virtually all of last season. For BVN, sophomore quarterback Henry Martin played well in spot time behind Mertz in ’18 and is expected to lead the team. Coach Andy Sims also returns sophomore defensive back Dasan McCullough, who has received multiple Division I offers.

6A Blue Valley West at 5A Mill Valley – Another key EKL matchup. Mill Valley finished 7-4, while Blue Valley West was 3-6. The teams, both Jaguars, had similar offensive production. MV averaged 24.9 points a game, while BVW had 29.3 points a contest. However, Mill Valley was significantly better on defense with 19.6 points allowed. BVW had 38.2 points permitted per contest. Mill Valley won 35-24 in this contest last year. West has not had a winning season since ‘14, though returns standout wide receiver David Brown (1,054 yards). Mill Valley had never beaten Blue Valley West before last year and was previously 0-3 in games from ’04-09. Cooper Marsh, the backup in ’18, takes over as the starting quarterback. Senior running back Tyler Green returns after he leads the team with 134 carries for 695 yards and nine scores, though the top-six tacklers graduated. MV senior Kyle Kelly has committed to Arkansas State.

Will Derby continue its winning streak?

6A No. 1 Derby at 6A Garden City – Derby finished 13-0 and captured the Class 6A state championship last season. The Panthers permitted just 7.9 points per contest, best for the program since ’94. Tre Washington cleared 1,800 rushing yards, and lineman Alex Conn has committed to Nebraska. The excellent Panther season started with a big 49-6 win against Garden City, traditionally a strong defensive team. GC slipped back to 2-7, though returns four-year starting lineman Refugio Chairez, a Missouri Southern commit.

Can O. North continue its run versus O. East?

2A Humboldt at 2A Neodesha – Humboldt finished 11-1 and averaged 53 points a contest in ’18, the best season in school history. The Cubs return lineman Josh Hull and running back Conor Haviland, who rushed for 1,687 yards, 32 rushing touchdowns and four punt return scores. Neodesha finished 2-7 and longtime coach John Black has left. Former Bennington coach David Gillett has taked over. The Cubs won this game 48-6 last season, and is heavily favored in this contest. However, a win would help solidify Humboldt has a 2A contender.

The Cubs did beat Rossville in the playoffs last year, though does not have the strength of schedule as any of the other 2A contenders. Last fall, Humboldt had the No. 28 SOS in 2A, according to Prep Power Index, well behind Riley County (1), Phillipsburg (6), Conway Springs (14), Silver Lake (17), Rossville (2) and Hoisington (11).

Can Norton improve in Class 2A?

1A No. 2 Plainville at 2A Norton – A critical Mid-Continent League matchup, Norton has twice the number of players as the Cardinals, ranked second in Class 1A. Norton finished 4-5, its second losing season since the ‘90s. Plainville has reached final four the last two years and lost to Smith Center both seasons. The game features two top quarterbacks with the Cardinals’ Jordan Finnesy and Norton’s Kade Melvin. Finnesy, Plainville’s Jared Casey and Norton’s Judson Wiltfong have all been offered by Fort Hays. The Cardinals won 31-14 last fall, though Norton returns virtually all of its key players, except Hayden Wiltfong, from last season.

Can Central Plains continue its success – and its win streak versus Ness?

8-Man I Ness City at 8-Man I No. 4 Central Plains – The Oilers, preseason No. 4, went 13-0 and captured the state title last fall. CP allowed just 34 points, the best eight-man scoring defense in at least 15 years. However, Central Plains graduated its entire line. Several players have stepped up in preseason, including Tyler Holmes at center/nose guard. Lawson Oeser is back at running back, and Jerred Bieberle will play multiple roles, including one of the team’s two quarterbacks.

Can the road team win?

Can SES continue domination in the Saline County rivalry?

1A Sacred Heart at 2A Southeast of Saline – Both of the Salina-area rivals enjoyed an improvement last year. SH doubled its win total to 4-5 and had a massive tumble in scoring defense. SES also doubled its win total from 4-5 to 8-2. Both squads return their quarterbacks with the Trojans’ Jackson Gebhardt, and Sacred Heart’s Mac Hemmer. Southeast of Saline has won five in a row in this series, including 39-0 last year.

How many points are scored in Hill City/Osborne?

8-Man II No. 3 Osborne at 8-Man I Hill City – Last year, Osborne opened the season with an 88-76 victory against HC en route to eventual Eight-Man, Division II runner-up honors behind Hanover. Both quarterbacks, Osborne’s Darnell Holloway and Hill City’s Conner Born, have graduated after they each cleared 350 rushing yards in the contest. However, Darrien Holloway returns for Osborne after he has rushed for more than 3,000 career yards. HC’s Dalen Journigan is one of the state’s best all-purpose players. Former Osborne coach Steve Tiernan returns to the school after he took Solomon to the state title game last fall. Hill City has back-to-back 5-4 seasons.

1A No. 5 Centralia at 2A No. 4 Rossville – Centralia and Rossville each finished 8-3 in 2018. Rossville captured this contest, 26-14. The Bulldogs have sophomore Torrey Horak after he led the team with four interceptions. Centralia counters with senior quarterback Kamble Haverkamp. He tallied more than 2,100 yards of total offense. Centralia opened 0-2 last year before eight straight victories. Last year marked just the second meeting since ’04. Centralia won 20-13 in ’10. The Panthers have lost three straight Week 1 contests, albeit the first two to Sabetha and last year to Rossville, both traditional higher classification powers.

Can Columbus have a bounce back year?

The Titans went 1-8 last year, not a typical season of what they have been as of recent. Dan Grundy stepped down and is focused on more of an administrator role at the high school as he did great things with the program including a state runner up finish in 4A-II in 2014. Blake Burns is the head guy now but has been on staff for a while and isn't going to let last years season get in the way of success. They get St. Mary's Colgan in week one of the season, a game that was over very fast last year. Could this be a decent game on Friday night? We shall see as numbers are down at Colgan but a solid cast of players do return. Keep an eye on sophomore Gabe Martin for Columbus this year. Patrick Cassidy is also a multiple sport player to keep an eye on as he earned all state honors for Columbus in basketball last season. Colgan has key players back like Dom Bevalacqua, Andrew Lomshek, Johnny Goetting and Derek VanBecelare. Graduation nailed the CNC league last year and this league may be a little bit more open than you think. Many have Galena and Frontenac at the top as they probably should be, but don't count out having a lot of evenly matched games this year for the very few league games there will be due to districts.

Parsons came out of nowhere to win eight games last year, are they still a team to look for?

We shall see as the VIkings under second year head coach Kurt Friess won their first playoff game in 42 years last season. Gone are a very solid cast of seniors like Gage Friess, Patch Loadholtz, Davontae Yates and Joel Schibi. Also out is all-state multiple sport athlete Daquan Johnson who was injured this summer. The line could be better than last year as kids got bigger and stronger but the overall team speed may not be what it was one year ago. Still look for the Vikings to win some football games in their schedule this year and to contend to get to the 3A playoffs for the second year in a row. Dariq Williams is primed for a big senior season and look for junior lineman Ricky Ellis to have a breakout year along with Tanner Barcus and Ethan Houk.

Can Topeka High be a major contender this year in 6A?

History has seem to haunt Topeka High on preseason previews as nobody ever factors them in as a state champion. Reason why? They have never won one but.  It's 2019 and the past shouldn't matter but 6A is a loaded gauntlet and has been controlled by that of Derby over the last six or seven football seasons. Topeka has the talent there to do it this year and are very well coached by Walt Alexander who has put this program on the map. There is no shortage of Division I talent in this school over the last seven or eight football seasons. Topeka has made it known on social media but they will have to get by a juggernaut like Derby on the West to get to the title game first. Minnesota commit Ky Thomas is back for his fourth year as a starter and is ready for another monster year along with KU commit Da'Vonshai Harden at quarterback. Last season Topeka lost to Derby 38-7 in the playoffs