v Faces in KS: Henry Martin - Sports in Kansas 
Warning: include(../includes/bodytag.php): failed to open stream: No such file or directory in /home/kansass/public_html/ks/news/index.php on line 36

Henry Martin is ready for a big sophomore season for BV North. 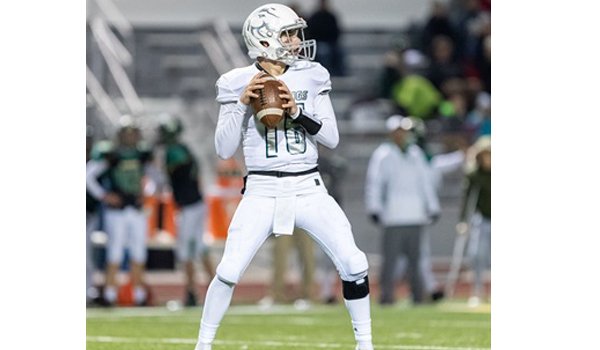 Blue Valley North has had a lot of success since the arrival of head coach Andy Sims. It wasn’t long ago that the program struggled to win a game, now they have a state title and a state runner-up finish over the last two seasons.

So, what’s next for the program after they graduated one of the best high school football players in Kansas history in Graham Mertz to the University of Wisconsin? That is a question that is hopefully soon be answered. We do know one thing, when Mertz when down with injury last season, then freshman quarterback Henry Martin looked like a veteran signal caller in his lone start. Martin threw for 300 yards and five touchdowns in the lone start.

Fast forward to now and Martin is now a junior looking to be one of the top sophomore playmakers in Kansas. Martin, who stands 6-foot-0 and weights 190, is back with four other returning starters on the Blue Valley North high-powered spread RPO offense. They’ve also added some very solid playmakers in the off-season that should make the Mustangs an instant contender once again in 2019.  Cameron Burt is gone after a huge production year but there are several guys this year to look at picking up the distribution. Some of those players are Shawn Hendershot. Dierre Johnson, Conner Lofquist, Thoe Graybill, Mekhi Miller, Kahlil Allen and Ian Loftus.

There is a lot of key talent on this year’s team as Dasan and Deah McCollough are two of the most heavily recruited freshman and sophomores in Kansas. Their father, Deland, is currently the running backs coach at the Kansas City Chiefs and their older brother, Deland, graduated last year and is now with Miami (OH). Tim Foster, Nick Hafford, Marco Collins, Reid Spachman, Brock Anderson also return this season and should be all-league caliber players in 2019.

To the outside, Martin has some huge weight on his shoulders as a sophomore to fill the shoes of a player like Mertz but with the surrounding cast around him it should make for an easy transition. High pressured situations are nothing new to Martin. He is two-time national javelin AAU champion and set the 13-year old Junior Olympics record in 2017. Martin looked poised and in control in his limited action from last year and probably a big reason a lot of hype has been on him entering the 2019 season.

We caught up with the rising sophomore in the latest Q&A edition of Faces in Kansas below.

Chet Kuplen, CEO/Founder of Sports in Kansas, on Martin

“What I saw of him last season, he didn’t look like a freshman. I think people need to have realistic expectations of him as well as he’s only a sophomore this season and replacing arguably the best high school passing quarterback in Kansas history. You’re not going to instantly have Graham Mertz again or maybe ever again but I really like what they have around him and I think he will fit in perfectly to their offense. He doesn't need to be Graham he just needs to be Henry. Coach Sims knows what he’s doing and what he’s done there is very, very impressive. Before Graham they had Joey Dolan and he was a darn good high school quarterback with incredible numbers, so Henry is going to produce and so is the offense. When we started Sports in Kansas over seven years ago, they were a program nobody anywhere talked about at all. The last four seasons they have been really impressive. Now they are in the convo for a state title this year and the last couple of years. EKL football is so good, you just have to be around it to know the level of the league. When North won the title they had four league losses. They will be tested every single week as will every single team in the league."

My dad has taken me to games since I can remember.

To play to the best of my ability and distribute the ball to our playmakers.  Hopefully, we can make a run to State again this year.

Everyone has a shot, so why not us.

I like to distribute the ball to the guys on my team who are the real force.  That includes Shawn Hendershot, Dierre Johnson, Conner Lofquist, Theo Graybill, Mekhi Miller, Kahlil Allen and Ian Loftus.  These guys are all playmakers and my job is to get them the ball.

My school is really good at games.  But I also like going to other schools.  So far, I haven’t been to a game where the crowds weren’t rocking.

We have so many good players and good guys on the team.   I think we are an easy team to watch.

Dasan & Deah McCullough, Tim Foster, Nick Hafford, Marco Collins, Reid Spachman, Brock Anderson and if I didn’t mention my whole offensive line, they would kill me.  So I need to give a shout out to Garret, Jake, David, Jaxson, Griffen and Charlie!

I’d would say the post game celebrations.  But anymore, it has to be the friendships I’ve been able to make.

He is really good and I like playing for him.  He holds his players accountable.

Like a lot of teams, we did a lot of 7vs7 games, ran and lifted weights.

I had a lot of contact with coaches.  But it’s still too early in the process to focus on that.  My focus is on the season.

Hanging with my family and friends.

I’d like to stay  involved in football somehow.  Since the odds aren’t very good at making it to the NFL, I think I’d like to get involved with coaching.

I have multiple role models.  My Mom, Dad and sister come to mind first.  I also use Ryan Willis as a role model.

I’m a big fan of my older sister who runs NCAA Division 1 Track at the University of New Orleans.