v Faces in KS: Scotti Easter - Sports in Kansas 
Warning: include(../includes/bodytag.php): failed to open stream: No such file or directory in /home/kansass/public_html/ks/news/index.php on line 36 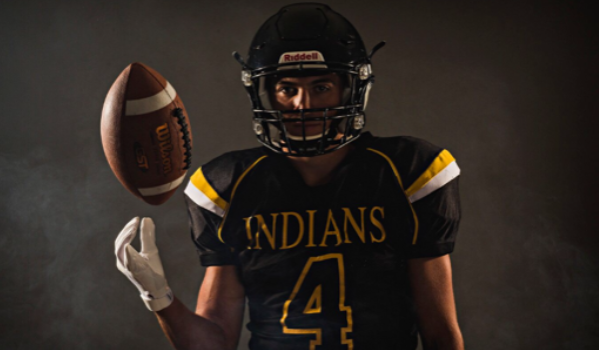 Andale is one of the most successful high school sports programs in all of Kansas. In recent memory it seems to be they have been a contender in track and field, football and basketball. The Indians football team is known for producing all-state football players just about every single football season. It’s no different this football season as Andale is primed for a big season in 3A after going 11-1 in 2018

The Indians, led by head coach Dylan Schmidt, return eight starters on offense and six starters on defense. One of those senior returning starters looking for another huge season is defensive back/receiver/running back Scotti Easter.

Easter, a 6-foot-0, 170-pounder, is back after earned 3A all-state defensive back and All-Metro honors in Wichita in 2018. In addition to that Easter earned first team all-conference in the AVTCL IV in special teams and defensive back. He was also honorable mention on offense as a receiver.

Easter racked up 96 tackles a year ago for the Indians who lost to eventual state runner-up Pratt in the 2018 playoffs. Easter also had 271 yards receiving on 18 catches for three touchdeowns and had another 187 yards in returns.

Easter also has the measurables to become a player at the next level. He has a 270 clean and a 4.50 40 yard dash handheld. He currently has offers from junior colleges and NAIA programs. Easter is also part of the powerhouse state champion track and field team at Andale.

After talking with Easter, he tells us their O-Line is key for their success in 2019. He lists Carson Fair, Creighton Camp, Conner Hennas, Carter Probst, Ben May, and Cayden Winter as key players on the line.

Andale also returns Mac Brand (LB/RB) and Easton Hunter (QB) who could be all-state caliber players this year in 3A. Brand was the AVTCL IV Defensive Player of the Year last season. They did lose all-state tight end/defensive end Mason Fairchild, now a true freshman at KU, on the two-deep as a tight end.

Andale was one of the the favorite to win it all last year before losing to Pratt in the semifinals (21-19) but should be one of the favorites again in 2019 to win the 3A title. The Indians are ranked in the top 5 in 3A by multiple publications across the state. Schmidt has yet to lose a regular season game as head coach of Andale entering year three. The Indians last won a state title in 2014 (4A-II) and took runner-up in 4A-II in 2017.

This feature is presented by Tim R. Schwab Inc. Proud to support Scotti Easter and the Andale Football Team. See our ad in the right corner.

How did you get involved in football? I got involved with football because my dad was the head coach of my cougar football team in 2nd grade. After that I just loved the sport and wanted to keep playing with all my friends.

What are your goals this season? My goals have never been to get awards or anything like that, they have always been two things, Win State and become a better athlete and person.

Do you guys have a shot to make a run this year? I believe we a chance to make a run every year! We have a lot of haters and doubters but in my opinion we have always been the hardest working athletes in Kansas and have really high expectations.

What’s the atmosphere like to play football on Friday night for your school and town? The atmosphere is crazy, literally everyone in Andale, Colwich and a lot of other places stop what ever they are doing and come and support us and that definitely makes everyone on the team very amped up and ready to take on who ever we are playing. Andale is exactly like the TV show ¨Friday Night Lights¨ and it is just amazing what such a small town can offer.

For anyone that hasn’t seen one of your games, why come to one?  I think if you haven't watched one of Andales games then you are missing out because if you like to watch hard hitting and college like games than you would love Andale.

Who are other key players on your team? In my opinion we don´t have any key players everyone on my team has the same mind set and same goals but I think our entire O-Line is our key players because without them Andale wouldn't be Andale without them. Carson Fair, Creighton Camp, Conner Hennas, Carter Probst, Ben May, Cayden Winter.

Do you play any other sports, tell us about that, what other positions do you play? I played Basketball and Baseball till sophomore year but I started doing track and wrestling and I am glad I did what I did because I am a lot more physical because of wrestling and a State Champion in track and field. In track I did the 4x4, 4x1 and long jump and high jump but my coach is wanting me to do either the 100 and 200 and maybe the 300 hurdles this track season.

What is it like to play for your coach? Its very intense and always on time, by on time I mean he makes a new practice scheduled everyday and when I look on the sheet it is crazy what is all on their. coach Schmidt is one of the hardest working coaches you can ask for because he loves the sport. He could be working somewhere else and be making a lot more money but he loves the game and the athletes.

What did you and the team do in the off-season to become better? We have weights every morning at 6 till about 8 and then the athletes would play a game of navy ball or 7on7 after every weights session. I had either camp or combine almost every weekend so I would always be busy.

What interest are you seeing at the next level and what are your plans? I am very interested in playing at the next level because I think my mind set is there I just have to bulk up a lot more. I would love to get the opportunity to play at K-state or Fort Hays but God has a plan for everyone.

Favorite thing to do when you aren’t playing sports? I love to go hunting with my friends or my dad. I go to the lake when ever I get the chance.

Favorite subject in school, what type of student are you, GPA? My favorite subject in school would have to be English because I love to read and improve my vocabulary any chance I get. I would say that I am an excellent Student because I am always on task in class and I am on Principal's Honor Roll and High Honor Roll every semester. I have a 3.767 out of a 4.0 because I am not the best drawer and painter in Creative art.

Who is your role model? My grandmother ¨Nadine Girrens¨ is my roll model because she owned her own business and is the hardest working women I know and no matter what she is always at every sporting event, but she was recently put in a care home and isn't doing the best but I know she will find a way to watch me.

Best place to eat in your town or the surrounding area? We have two amazing places to eat in Andale, Brunin Family Cafe is a really good breakfast place and Little Bear which is right by Brunins and it is a sandwich shop.

One thing the average person wouldn’t know about you? I fell into a fire when I was eight and got third degree burns on both of my hands and feet and a little bit of my face.