v Faces in KS: Mason Thrash - Sports in Kansas 
Warning: include(../includes/bodytag.php): failed to open stream: No such file or directory in /home/kansass/public_html/ks/news/index.php on line 36

Mason Thrash is one of the top linebackers in Kansas. (photo: Jacob Issacson) 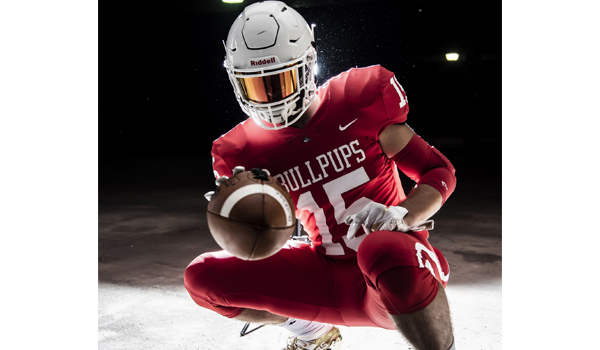 McPherson High School has enjoyed a lot of football success as of recent. The town known as perhaps the best basketball town in Kansas isn’t just known for basketball anymore. Football has certainly been in the spotlight as well in recent memory.

Although hit heavy by graduation on last years 4A state semifinalist team, the Pups return quite the cast of players including five starters on offense and seven on defense. Of course, you have KSU commit Cody Stufflebean that blew up after last season back at tight end and defensive end but it’s not just Stufflebean that had a huge year in 2018. Another player that has flown under the radar is senior linebacker Mason Thrash.

Thrash, a first team non-senior pick at Sports in Kansas, last fall is one of the states top returning linebackers for the 2019 football season. The 6-foot-2, 210-pound, senior, led the team in tackles with 70 last season despite playing in nearly half of the quarters due to the Bullpups dominating competition. In fact, Thrash played only until halftime in seven games last season.

He was also a 1st Team AVCTL-III pick last season at the linebacker spot and racked up four sacks. As a sophomore in 2017, Thrash tallied 30 tackles as a backup but did start at fullback. Thrash can also play tight end in addition to fullback on offense.

Thrash is also a standout wrestler for McPherson as he took fourth in 5A state last season and has twice been an all-league selection. He tells us wrestling is something that really helps him on the football field.

Although he is a very accomplished athlete, he's much more than that. He has never had a B in any of his classes as a straight A student. He features a 4.5 GPA and his favorite subject is math.

The Bullpups, led by head coach Jace Pavlovich, return five starters on their spread offense and seven on their 4-2 defensive scheme. They went 11-1 last year before falling in a thrilling semifinal game to eventual state runner-up Goddard. McPherson has never played for a state football title and it’s a major goal of Thrash and the Pups for 2019.

Chet Kuplen, CEO/Founder of Sports in Kansas, on Thrash

“The kid is physical and tough. He may not have the combine testing numbers that jump off the page for Division I recruiters but I don’t care, the kid can flat out play football and that’s what I am here to cover. He had big numbers in limited reps a season ago and should be one of the top 4A linebackers in Kansas this fall. He has great size and is also a very solid wrestler. I also don't cover too many high school football players that have a 4.5 GPA, so a school is getting a very quality student-athlete at the next level. While they were hit by graduation they have several pieces all over the field that could make them a favorite to get to their first ever title game. Mason is a very underrated player. Coach Pavlovich has done great things with this program and he has them rolling right now. People in McPherson I’ve talked to this preseason, including Jim Joyner and Steve Sell at the local radio station, are very excited about the Bullpups. Mac is ready to be in a title game.”

This feature is presented by Stupka Chiropractic and Wellness Center in McPherson, Kansas. Dr. Morgan Stupka and Dr. Brandon Stupka are proud to support Mason Thrash and the McPherson HS Bullpups! Best of luck in 2019! See our ad in the right top corner.

I grew up watching Nebraska football with my dad. I was always begging to go out and play catch, this fun little game evolved into me playing with my friends, which then turned into me falling in love with the game. From a very young age I saw the impact it had on players lives and it quickly became my life dream to play college football.

To be the first McPherson football team to make it to a state title game, then come home with a ring.

Yes. I don’t think we played to our full potential against Goddard in the state semifinals last year, and you can bet we will be back for our redemption.

At linebacker I’m gifted when it comes to schemes, game situations and film study. This helps me be quick with my reads and helps me play faster. I also play with a chip on my shoulder and never back down from competition.

McPherson is different. I’ve never seen an empty seat in McPherson Stadium. The support we get from our community is amazing, and I wouldn’t trade it for anything.

You are going to see a team who is hungry for a state title, with a community who is just as hungry.

My favorite thing about football is that I get to legally hit people every single play, and I get the opportunity to compete with my brothers.

I wrestle. I took 4th place at 5a state at 195 pounds last year. I plan to be in the state finals this coming year. I don’t think I would be the player I am today if it wasn’t for wrestling. The mindset you obtain from wrestling is life changing while it also helped me become a more well-rounded athlete.

Coach Pav is a super relatable coach. He focuses on doing the little things right, which leads to success in games. He does whatever it takes to get us to the next level, while also reassuring you that he always has your back no matter the situation. Just being in his presence you can feel his passion for the game, which rubs off on his players.

We spent all summer grinding in the weight room. We also go to the Blue Valley 7 on 7 tournament where we compete with 5a and 6a schools that we don’t get to see throughout the season.

I have some interest from KU, Emporia state, FHSU, and a few other D2 schools. I plan on playing at the next level, but I don’t know where right now.

Going boating with my friends.

The dream, of course, is to be in the NFL, but I expect to be starting to build a family, and striving to be a successful business owner, and potentially trying to coach.

I love math. I take pride in my academics. I’m a straight A student with a 4.5 GPA

I have many people in my life that I look up to and admire, however, if I had to choose just one it would be my dad. I have witnessed him get dragged down time and time again and have seen him go through some of the darkest parts of his life. Yet somehow, he has managed to completely turn his life around. If it wasn’t for seeing my dad go through these rough times, I wouldn’t be the man I am today. It has given me a different outlook on life and has really made me realize what is important.

Something a lot of people don’t know about me is that I have a very strong work ethic in every aspect of my life. From school, to sports, to day to day responsibilities. For example, many people think I’m just a dumb football player who only cares about sports, however, I have made education a huge priority and have never got a B in my life.