v Faces in KS: Nate Matlack - Sports in Kansas 
Warning: include(../includes/bodytag.php): failed to open stream: No such file or directory in /home/kansass/public_html/ks/news/index.php on line 36

Nate Matlack is looking for a huge senior season for Olathe East. (photo: 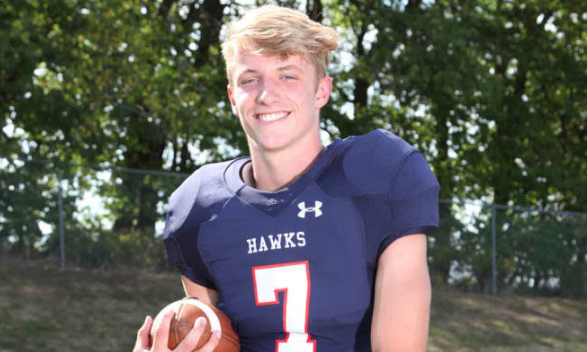 If you are familiar with high school football in the Kansas City metro, then you have most likely heard of Nate Matlack.

The Olathe East senior has been an anchor for the Hawks defense at defensive end and linebacker where he will be a three-year starter this fall.

Matlack has not gone unnoticed to Sunflower League coaches the last two years as he picked up all-league linebacker honors in 2018 and all-league defensive end honors in 2017.

Matlack credits his relentlessness and pursuit as two of the key attributes that make him a force on the field.

“What makes me a force as a player is always going as hard as I can every play,” Matlack stated.

Standing at 6-foot-4 and weighing 215 pounds Matlack has a solid frame that projects well at the next level. What makes him unique is his athleticism as he has recorded a 4.6 forty -yard dash and has an extremely impressive 41.5 inch vertical.

Matlack already has a plan in place for the next level as he committed to Kansas State this past spring choosing the Wildcats over other power five schools like Kansas, Syracuse, and TCU.

“My plan is to go to Kansas State University and win a lot of football games,” he stated.

Along with starring on the gridiron Matlack also participates in basketball and track for Olathe East.

“I play Basketball and Track. Basketball I really just get rebounds and play defense,” Matlack stated. “I didn’t play Varsity last year but our JV team that I was on went 19-0. In track, I do Shot put and Javelin. I went to state two years ago in Javelin and took 8th and shot this last year and took 12th.”

For now, though Matlack and the Hawks have some big goals they would like to accomplish this fall.

“Our goal is pretty much every team's goal, to win a State Championship,” he stated. “Individually become a better leader on the field and receive all-state.”

While East went 4-6 last year they return a lot of experience including six starters on offense and five starters on defense. As a result, Matlack and his teammates believe a state-run could be in the cards.

“I believe we think we do have a shot to make a run at state,” he stated. “We have a lot of guys returning and we now have some talent to work. If you put it all together we should be pretty legit this year.”

Along with Matlack some other key players to watch for on Olathe East this year is Marrell Fountain (RB/CB), Heze Newman (FS), Kam Byers (WR), and Darius Bibbs (WR/CB).

East, led by head coach Jesse Owen, open the season on Friday, September 6th against city rival Olathe North. Owen was a former high school player of the year in Kansas for Olathe North in the mid 90s.

Chet Kuplen, CEO/Founder of Sports in Kansas, on Matlack

"He has the rare combination of size and speed. There aren't many 6'4" 215-pound plus kids across the state that run in the 4.6 range out there. He has the body type that will be able to add a lot of weight as he gets into a college weight program and still keep that athletic ability. He has a 40 plus inch vertical, almost unheard of. While his numbers are off the charts in what he does, I am interested to see if he can have a dominating season this year for East. They certainly have some key pieces back and he should be one of the top defenders in Kansas this season."

I first started Tackle football when I was in 2nd grade. I always wanted to play Tackle Football so I played in the first chance I got to.

What are your goals this year?

Pretty much every teams goal, to win a State Championship. Individually become on better leader on the field and receive all state.

Do you have a shot to make a run this year as a team?

What makes you special as a player?

Always going as hard as I can every play

Why come to a game at Olathe East?

It’s great we always have a great student section and a good amount of people in the stands to cheer us on. To see the game played the right way

I play Basketball and Track. Basketball I really just get rebounds and play defense. I didn’t play Varsity last year but our JV team that I was on went 19-0. In track I do Shot put and Javelin. I went to state two years ago in Javelin and took 8th and shot this last year and took 12th.

Great he always is fun to be around but he will always get serious when he needs to. I think he is one of the best if not the best Coach in the Sunflower League.

We came in almost everyday of the week, lifted then did football related stuff for 2 hours after. We also went to Staley and Harrisonville for scrimmages.

My plan is to go to Kansas State University and win a lot of football games.

What do you like to do in your spare time?

Either workout, hangout with friends, or play video games

Hopefully getting a shot in the NFL but if not maybe working on a masters degree.

What type of student are you?

Favorite subject is Math and I have a 3.5 GPA

My role model is my Dad. He has always been and always will be

Definitely Five Guys. Best burgers in the US.

That I love Magic and Card tricks