v Faces in KS: Ethan Kremer - Sports in Kansas 
Warning: include(../includes/bodytag.php): failed to open stream: No such file or directory in /home/kansass/public_html/ks/news/index.php on line 36

Ethan Kremer is one of the top juniors in the state of Kansas for Mill Valley (photo: Lori Habiger) 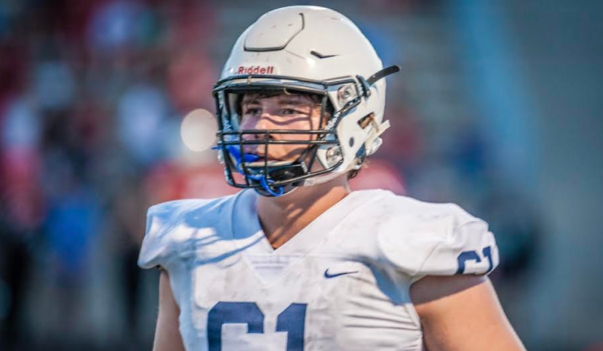 Four-year starters a very rare in large class football across the state of Kansas. Finding a four-year starter on the offensive line is even rarer. Mill Valley Junior Ethan Kremer is on pace to accomplish that rare feat as he is going into his third season starting for the Jaguars in the trenches.

As a sophomore Kremer was a standout on the offensive line bringing home first-team all EKL honors and was named all-state non-senior by Sports in Kansas. He also was a force on the defensive line where he was named second-team all EKL.

Along with being a standout on the gridiron, Kremer is also a force to be reckoned with on the wrestling mats. The junior currently boasts a career record of 70-21 and dominated this past winter winning the league, regional and state championship in the 220-pound weight class. As a result of his efforts, he was named an All-American by the USMC.

Kremer believes his experience wrestling has translated smoothing to football making him a force on the field.

“I’ve been playing football my whole life, learning the right way to play at a younger age has allowed me to play at a faster pace by simply doing instead of thinking,” Kremer stated. “Also competing in the sport of wrestling has taught me leverage and how to move people around whenever I want.”

While there is still some time before the next level Kremer has not decided yet on whether he will be playing football or wrestling in college.

Academics is another endeavor Kremer excels in as well as he currently holds a 4.0-grade point average.

As for this fall, Kremer and his teammates have been working hard for their ultimate goal of a state championship.

The Jaguars have some experience as they return eight total starters from last year’s 7-4 team which featured three of its four losses to state champions (Bishop Miege, Aquinas).

Mill Valley, led by head coach Joel Applebee who has two state titles in 2015 and 2016 in 5A, opens their season on Friday, September 6th at 7:00 p.m. as they host Blue Valley West.

Chet Kuplen, CEO/Founder of Sports in Kansas, on Kremer

"You don't come across too many guys playing both ways in the EKL and definitely not many that are all-state caliber on both sides of the ball. He's an oustanding wrestler and that has really translated well for him in football. Sure he doesn't have Division I size that recruiters are looking for but this kid is one heck of a football player no matter how you look at it. Coach Applebee has done a tremendous job putting kids in a position to succeed at Mill Valley. The talent they've had their over the last 5-6 years is incredible."

I played my first year of football in 1st grade, and began tackle football in 3rd grade. My dad coached all of my football teams up until I started playing for my middle school in 7th grade

Absolutely. We have the best coaches in the state, they put us in a position to win every game we play.

I’ve been playing football my whole life, learning the right way to play at a younger age has allowed me to play at a faster pace by simply doing instead of thinking.  Also competing in the sport of wrestling has taught me leverage and how to move people around whenever I want.

One of the best parts of going to Mill Valley is that the Shawnee community is very supportive of all the athletic teams. This leads to an atmosphere at all the games that is amazing. There's nothing like a friday night in “The Swamp”.

Coming to an EKL football game will let you see the best high school football Kansas has to offer.

Along with playing football, I wrestle.  This past season I won a state title in the 220lb weight class and this summer I became an All-American in the HWT weight class at the USA wrestling Freestyle National Championships.

The coaching staff at Mill Valley is extremely committed and dedicated to making everyone better on and off the field.  Coach Applebee has built a tradition of success but also a strong culture of accountability.

We worked really hard in the weight room and in summer drills to make ourselves better and closer as a team.

When I’m not playing sports I like to go trap shooting, hunting or read.

In 10 years I hope that I have a successful career so that I can support my family.

My favorite subject is Math and I have a 4.0 GPA

My role models are my parents because they do so much for me and push me to be the best person I can be.

Most people wouldn’t know that I did gymnastics starting when I was 3 years old, until I started wrestling. I can still do the splits.