v Sports in Kansas: 25 Offensive Lineman to Watch for 2019 - Sports in Kansas 
Warning: include(../includes/bodytag.php): failed to open stream: No such file or directory in /home/kansass/public_html/ks/news/index.php on line 36

Sports in Kansas: 25 Offensive Lineman to Watch for 2019

Turner Corcoran is looking for a huge senior year for the Firebirds. (photo: Bryan Lloyd) 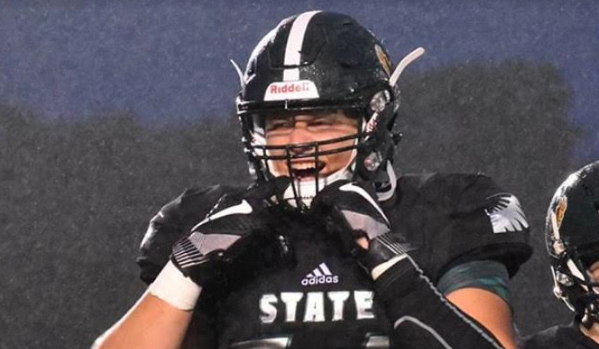 Several offensive lineman return after having big seasons in 2018. Check out who to watch in 2019. This lists main purpose is to represent the entire state from nearly every class. Stay tuned over the next few weeks as we will do this position by position. Chet Kuplen, CEO/Founder of Sports in Kansas, evaluates players every year based on performance from prior year, our all-state lists from last year and events (camps/combines) he sees players across the state with input from several coaches and media members. This is not a recruiting list or prospect list and players are not ranked or in any special order.This list is powered by Rack Performance, Nex-Tech Wireless, American Implement and Kansas Turf. Be on the lookout for our postseason honors after the 2019 season on who will be the Top 100 seniors in Kansas and who will make the Sports in Kansas All Non-Senior Team. While its impossible for us to check out every player in the state, we have a pretty good track record at going into detail like no other outlet in the state. If you ever have a player that you think we should take a look at be sure to DM @sportsinkansas or sportsinkansas@gmail.com as tips coming in can always help out on who we should check out! If you are interested in a player evaluation contact Chet Kuplen by TEXT at 620-719-0283 or email sportsinkansas@gmail.com. Several player evaluations landed major offers over the last eight football seasons.

Corcoran is headed to Nebraska and is one of the state’s best lineman recruits in the history of Kansas high school football. Corcoran is a back to back pick on the prestigious All Non-Senior team at Sports in Kansas. He is one of only a few to do that since the history of the list. Lovette Eppelle and Malik Berry will also be big time playmakers this season in addition to Corcoran and his national recruiting status.

Kalny earned SIK non-senior honors last season for the Thunder. SJA has several key players back including Kalny, Lautt and Moellers. Kalny is an emerging Division I prospect.

Chairez is likely the strongest player in the state and has been a four-year starter. His lifting numbers are off the charts. He is also the 6A state heavyweight wrestling champion. Chairez squats 765 pounds and has committed to Missouri Southern. Nuzum will be known on both sides of the ball and will play left tackle and defensive end. He has put on 40 pounds since last season and is squatting 586 and behcning 325 while cleaning 335.  Nuzum is just a junior.

Two of the best lineman in Kansas on the same team. Fayette has committed to South Dakota at the next level and is part of a solid senior class that return for the Mavericks in 5A. Saville, who has primarily been a defensive lineman could play offense if needed, is also a three-year starter like Fayette and both earned all non-senior honors for the Mavericks last season from Sports in Kansas. A year of experience for Collin Shields could have the Mavericks as a team to watch for in 5A. Trevion Mitchell also returns as one of the top defenders and was recently featured on Sports in Kansas “Faces in KS”. Fayette and Saville are two of the most underrated players in Kansas and should be one of the better lineman duos in the state.

Pauls is an Iowa State commit that earned first team SIK non-senior honors last season. Pauls will be one of the best lineman in 5A this upcoming season. Riley Wagner is also back on both sides of the ball and will lead the Spartan defensive line unit after picking up first team all-league honors in 2018.

White has had several recruiters from the Division II ranks all over him since the end of last football season. He was a huge part of the Frontier League Title last year and earned all non-senior SIK honors in 2018.

He will be one of the states top small school players as the Cardinals look to be a major contender in 2A. With the return of SIK Non-Senior POY Wyatt Pedigo and Philbern, expect big things to come from Hoisington in 2019. Philbern is also a very accomplished offer.

Although he doesn’t have a lot of film out yet all it took was one camp to see the potential of the sophomore to be from Meriden. He could shine at either offensive line or defensive line this season for Jefferson West. His older brother, Penne, will be one of the best junior defenders in the state. Also throw in brother Kauli who is a senior and will look for a big year for all three Saili siblings.

Panzer is one of the top multiple sport athletes in the state, also likely the best heavyweight wrestler in Kansas, winning the 3-2-1A title last year. He beat wrestlers from all levels last season. He’s likely just as good of a defender on the defensive line that he is of an offensive lineman. Panzer has committed to Kansas State University. He ranks as the 28th best center in the country by 247sports. He could project at guard or tackle at the next level.

Kelly will look to lead a Mill Valley team that is hungry to get back in the conversation of winning another state title as the Jaguars won it all in 2015 and 2016. Kelly will anchor the offensive line as Ethan Kremer will lead the defensive line. He has committed to Arkansas State at the next level. Kremer is one of the top wrestlers in the state and was a two-way starter last season earning all Non-senior honors in 2018 as a sophomore. He is one of the toughest players in the state.

Mozingo is one of the strongest lineman in the 5A ranks. He will also be one of the best. With star lineman Joe Michalski gone to Oklahoma State and 2021 national recruit Jaedon Roberts gone as a transfer to Texas he will be looked upon to be the main guy up front on the Saints line. Aquinas is a heavy favorite to repeat despite all they lost. Dionte Brown is also a two-way lineman that could be asked to step up big on both sides of the football. The Saints feature Division I recruit Peyton Reeves to lead the defensive side of the ball as well and if needed he could likely fill a spot, however Randy Dreiling teams often only play one way and the Saints are deep at all positions.

Several key pieces are gone from last year but these two return to be two of the better 5A lineman from a season ago. Reagan Jones is back and Nortwhest should be a solid contender for another deep run. Also add in Nate Carter, a sophomore, that started as a freshman last fall and could turn into one of the strongest players in the state by the time its all said and done.

Sample is the best shot put thrower in Kansas with a throw over 61 feet last season as a junior. He is also an all-state lineman that returns for the Chieftains. He may not have the height to project as  FBS lineman but he will have several opps to throw Division I in track and field.

Beyer should be one of the top lineman in the Wichita are for 2019 and earned all non-senior honors from SIK last season.

Warner is an athletic lineman that committed to Kansas State this off-season. GE had one heck of a turnaround last season and he was a big part of it. Look for big things for the Blazers and Warner in 2019.

Miller is an underrated lineman that starred for head coach Zach Rampy last season and is a weight room freak. Look for big things out of Miller in 2019. Miller is just as good if not better on the defensive side of the football.

Stroud is a Division I talent that turned a lot of heads last season. He also moves very well for his size.

He may play 8-man football but anyone that knows anything about it knows that it is no joke. Hanover has produced top notch talent over the last several seasons and Weber adds to that list. Look for a big year for him in the 8M-II ranks.

Hull is a little raw for his size as he is getting used to carrying 265 pounds. Two years ago he was barely over 200 pounds. The Cubs made a semifinal a year ago for the first time in program history. Hull has worked extremely hard in the off-season to emerge as a recruit to look for in 2019. Conor Haviland is also back in the backfield so look for Humboldt again in 2A.

Although he isn’t a lineman in high school, Richman plays tight end for the Tigers, he will play line at the next level for the Iowa Hawkeyes. Richman is basically a high school lineman that will be one of the better players in the Eastern Kansas league this year.  Evan Taylor also makes the list on this combo pick as the Tigers look to put themselves back on the list of 6A contenders in 2019. Several key pieces return up front for BV.

The Nebraska commit helped Derby to a state championship last season. He blew up after the season last year. Derby also returns Tre Washington in the backfield and look for the way to be paved through the path of Conn.

Shields is staying home to play for the Kansas State Wildcats. He emerged as a recruit with his size after last season. Look for a big year for him in 6A. Shields will look to be a headline player for the Indians as David Hernandez and Kevontae McDonald are both gone to graduation.

Kurth is a emerging player in the FBS recruiting talk over the last few months. We were guilty of not knowing much on him last season but that has changed since seeing him in person at a combine/camp this summer in Salina. He looks the part and has an offer from KU. Colby also returns utility man Calvin Stapp but do lost Jordan Schippers to Western Illinois. Kurth could continue to blow up

The Harvard commit will be the next in line to lead the Stags offensive line unit as Miege looks for their sixth consecutive state title. Burns will pave the way for star back Brison Cobbins.

Small school combo pick here as there is a lot of talent in 3A and below . Grider is a three year starter and will be one of the top small school lineman for 2019. He will look to lead the way for his brother Scott who will be one of the top backs in the smaller ranks of Kansas for their dad and head coach Jason Grider. Johnson is a rare four year starter and will look to lead the Beloit offensive line who returns a lot of key pieces. Williams is a returning all-state selection for 1A Jackson Heights who could emerge as the team to beat in 1A East.

Fehrman looks like he lives in a weight room and repped out 225 bench 18 times at this summers Sports in Kansas Shrine Bowl combine. Although he will be known more on the defensive side he could also shine if needed on the offensive side of the ball. He also took third in state wrestling as a sophomore.

Others Top Lineman Watch in Kansas from Sports in Kansas: