v Faces in KS: CJ Callaghan - Sports in Kansas 
Warning: include(../includes/bodytag.php): failed to open stream: No such file or directory in /home/kansass/public_html/ks/news/index.php on line 36

Callaghan and SM West are looking for improvement in 2019. (photo: Mark Witters) 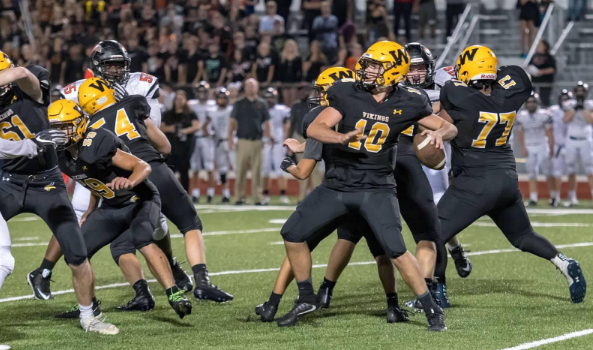 Growing up the son of a high school football coach CJ Callaghan has been around football his whole life. This fall will be his third season starting for his father Tim at Shawnee Mission West.

Not many high school athletes have the experience of playing for a parent however it is one he relishes.

“It’s awesome because he’s my dad too and having a good relationship it makes it way better to play,” Callaghan stated. “He knows a lot about the game and has taught me everything I know.”

Callaghan will direct the offense at Quarterback is coming off a solid 2018 season where he passed for 837 yards and rushed for 73 yards with 14 total touchdowns and just four interceptions. His efforts earned him honorable mention all-league honors.

The 6-foot-4 215-pound lefty has a very strong arm and good size combined with his knowledge of the playbook Callaghan can really wreak some havoc into opposing defenses.

“Having a good understanding of the offense and knowing who to give the ball to at certain times,” Callaghan stated. “My arm strength and accuracy help me make all throws anywhere on the field.  Also, having playmakers that make things easy for me.”

Along with a strong arm and good size, Callaghan also Is very athletic as he is a three-sport athlete as he plays basketball and participates in track for the Vikings. He starts at power forward on the hardwood and throws the discus in track. This past spring, he went to state for both shotput and discuss.

When it comes to playing at the next level Callaghan would like to play football.

“I’m mostly getting looked at by D2 and NAIA schools and a few D1’s,” he stated. “I plan on playing at the next level.”

As for the time being Callaghan and the Vikings are ready to have a big fall and turn things around from last season.

“We’ve had a rough couple of years but we’ve had a good summer and have a lot of experience coming back,” he stated. “We all have high hopes for this season.”

The Vikings could catch a lot of people by surprise in 2019 as they return eight starters on offense and seven starters on defense. West hopes to lean on their experience this fall.

Some key returners outside of Callaghan include two players Wesley Clark (S/WR) and Treyvon Gilyard (RB/OLB).

“Wesley Clark is a real baller and has great ball skills on offense and defense,” Callaghan stated. “His Football IQ is very high and is very reliable for anything.”

“Treyvon Gilyard (RB/OLB) is strong and very versatile,” Callaghan added. He can be asked to play other positions and excels in everything he does.”

Hopefully 2019 for the Callaghan’s and the Shawnee Mission West Vikings is a memorable one. The Vikings return eight starters on offense and seven on defense.

This feature is presented by Volt Enterprises. Best of luck to SM West in 2019. See our ad in the top right corner.

Chet Kuplen, CEO/Founder of Sports in Kansas, on Callaghan

"He makes a lot of nice throws for a big lefty. He has really good arm strength and the ball looks like it has a lot of velocity on it. You may look at their record and think they aren't a very good team but KC football is legit and you have to bring it every week, their offense still produced a lot last year and they lost three ball games by a combined 10 points, so records can be decieving. I look for a lot of team improvement this year with several starters back and they know they will need to step up defensively to give the team a chance to win. Not many high school quarterbacks are also state qualifers in the throwing events like shot put and discus in track and field. C.J. passes the eye test."

I’ve been around football all my life because my dad being a coach since before I was born and I’ve grown to love it at such a young age.

We’ve had a rough couple years but we’ve had a good summer and have a lot of experience coming back. We all have high hopes for this season.

Having a good understanding of the offense and knowing who to give the ball to at certain times. My arm strength and accuracy helps me make all throws anywhere on the field.  Also, having playmakers that makes things easy for me.

Seeing the big crowd cheering the team on and being supportive no matter what. And playing with your best friends makes Friday nights give you a feeling you can’t really describe.

Our record doesn’t show it but we play hard til the very end and the atmosphere from the stands every game is electric.

Wesley Clark(S/WR) A real baller and has great ball skills on offense and defense. Football IQ is very high and is very reliable for anything.

Treyvon Gilyard(RB/OLB) Strong and very versatile. Can be asked to play other positions and excels in everything he does.

It’s a true team sport and everybody has to come together and be on the same page to be successful. Also, spending time with my dad everyday and playing for him.

It’s awesome because he’s my dad too and having a good relationship it makes it way better to play. He knows a lot about the game and has taught me everything I know

Started hitting the weight room hard before school and really buying and trusting the process.

I’m mostly getting looked at by D2 and NAIA schools and a few D1’s. Plan on playing at the next level.

Hanging out with friends and family.

Having a good job but don’t know what I want to do yet.

Weights because I’m with my friends and dad but I really like math. My GPA is 3.6

My dad because he’s set a good example of how to be a great man and he’s the hardest working guy I know.

I live in Olathe and have gone to school in the Olathe district all my life up until high school.