v Faces in KS: Cody Stufflebean - Sports in Kansas 
Warning: include(../includes/bodytag.php): failed to open stream: No such file or directory in /home/kansass/public_html/ks/news/index.php on line 36

Cody Stufflebean is looking for a huge year for McPherson. (photo: Kendall Shaw) 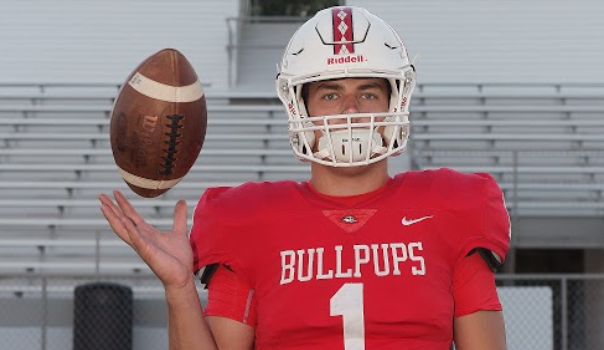 The McPherson Bullpups and Cody Stufflebean were no strangers to success last season as they reeled off 11 straight wins to open the season before falling to Goddard in the State Semifinals.

Stufflebean will start at Defensive End/Tight End for the third consecutive season in 2019.

As a junior in 2018 Stufflebean recorded 33 tackles, 13 tackles for loss and seven sacks. What is most impressive about these numbers is that he only played the first half in almost all of the teams 11 wins as the Bullpups put those games away earlier.

Stufflebean also put up very impressive numbers in 2017 as a sophomore when he recorded 47 tackles, eight tackles for loss and three sacks.

When asked what makes him a force on the football field Stufflebean was quick to point out his instincts along with his athleticism.

“I think what makes me a force player is my understanding of the schemes and how are defense works, also my high motor and horizontal speed,” he stated.

Standing at 6-foot-4 and weighing 235 pounds Stufflebean has a strong frame that makes him stand out on the field. Combine that with impressive weight room numbers and a 4.79 forty-yard dash it is no surprise that he has been heavily recruited by major division one programs.

Stufflebean who held 11 scholarship offers and is a three-star recruit according to most services committed to play at Kansas State this past summer. However, Stufflebean was late to blow up on the recruiting scene and that happened this last spring after a combine in Salina put on by Sharp Performance. He had zero FBS offers prior and then became one of the hottest prospects in the midwest shortly after. He featured offers from programs like Virginia Tech, Colorado, and Wisconsin.

“Once the combine in Salina and then the tweets from Sports in Kansas I kind of blew up with some serious interest from all over the place. I plan on going to KSU and most likely being a TE.” Stufflebean stated.

While many kids these days are going the route of one sport specialization the same cannot be said about Stufflebean as he participates in basketball, track and trap shooting for the Bullpups.

“I play basketball and hold the record for the highest shooting percentage in a season in school history,” he stated. “I also do track where I was a top ten javelin thrower in the state. I’m a part of the clay target team and gained all-state honors. On the team, I shot a 91 out of 100 at state.”

He is also very successful when it comes to academics as he currently holds a 4.5 GPA.

As for this fall, Stufflebean and McPherson have a lot of goals they are striving for; Stufflebean listed three important tasks he would like to accomplish.

“To make it to the state championship game,” he stated. “Also, be selected to the All-State All-Class team and the Shrine Bowl.”

McPherson, led by head coach Jace Pavlovich, has a lot to be hopeful for as they return eight starters from last year’s 11-1 squad that made a deep playoff run. As a result, there is no reason not to believe the Bullpups could make some noise in the state playoffs. Stufflebean also agrees that McPherson has the ingredients to do so. McPherson has never reached the state championship game in football and it is definitley something that is in reach.

“Yes, we have very skilled players on both sides of the ball,” he stated. “A lot of experience returning on defense and a handful of underclassmen looking to help on the offensive side.”

In addition to Stufflebean, some other key Bullpup players to watch for in 2019 are Kaleb Hoppes at OLB/ QB, Jakob Feil CB/RB, Kourtney Craig C, Mason Thrash MLB/TE.

Stufflebean and the Bullpups begin their 2019 season on Friday, September 6th when they play host to Salina South at 7:00 p.m.

Chet Kuplen, CEO/Founder of Sports in Kansas, on Stufflebean

"There were about five guys across the state that jumped off the page to me in Salina at the combine this past spring and Cody was one of those guys. I had college coaches texting me wanting to verify his height, along with a few others like Quinton Stewart/Hadley Panzer etc. at the event. Once they knew that it was legit, as well as his speed, offers started rolling in not just for him but multiple kids. You may think it's crazy for as good as these guys perform on Friday nights that they need verified heights/times, but that's how it works and a huge deal to college coaches. It wasn't just the local schools either, he had multiple places all over the country looking for him. Coach Pav told me at the beginning of the combine that he's the real deal and sure enough he was right. Coach Pav has done great things with this program and they are a major contender on the 4A West. Mac isn't just a basketball school anymore and it's nice to see multiple-sport athletes shining. I've had the opportunity to talk with Cody at a few events and he seems like a great kid. KSU landed a very solid prospect that was hidden for the most part of last fall and winter. Looking for a big year for McPherson and him."

To make it to the state championship game. Be selected to the All State All Class team and the Shrine Bowl

Yes we have very skilled players on both sides of the ball. A lot of experience returning on defense and a handful of underclassmen looking to help on the offensive side.

I think what makes me a force player is my understanding of the schemes and how are defense works, also my high motor and horizontal speed.

It’s an atmosphere any high school kid would want to have when you have 3,000 people in the stands coming out to support you.

You should come to one of our games to see how much of a family we are on the field and to see the amount of support the community brings behind us.

I play basketball and hold the record for the highest shooting percentage in a season in school history. I also do track where I was a top ten jav thrower in the state. I’m apart of the clay target team and gained all state honors. On the team I shot a 91 out of 100 at state

It’s a great experience there is nothing better than to go out everyday and see the coaching staff having a blast with one another and how they interact with the players.

We would do some conditioning but mostly focused on weight lifting Monday-Friday. We attended a couple camps as a team and played in the blue valley 7 on 7 tournament.

I definitely look up to Wyatt Seldi. He was a great leader and a very enjoyable person to be around, someone who always made practice fun

My favorite place to eat is La Fiesta in McPherson