v Faces in KS: Mason Richman - Sports in Kansas 
Warning: include(../includes/bodytag.php): failed to open stream: No such file or directory in /home/kansass/public_html/ks/news/index.php on line 36 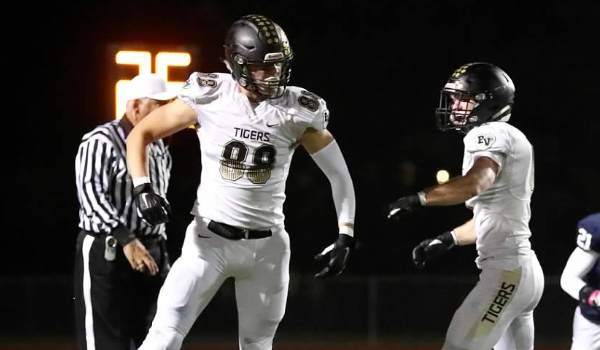 Blue Valley High School is one of the most tradition rich programs in the state of Kansas with six state football titles. The Class 6A Tigers have also been loaded with talent over the years under all of their coaches whether that was Steve Rampy, the late Eric Driskell and now current head coach Allen Terrell.

One of those players loaded with talent is senior defensive end and tight end Mason Richman. Richman is one of the top recruits in Kansas this year and has committed to Iowa at the next level. The 6’5.5”, 256-pound, senior can play a variety of spots. He may be a tight end and defensive end in high school but he is headed to Iowa as an offensive lineman at the tackle position. He has the versatility to play multiple spots, great speed with his size at 4.9 in the 40 and has over a 30-inch vertical. Richman is also one of the most physical defensive ends in the state for 2020. Richman has also been rated as high as the #2 overall prospect in Kansas by 247sports, those rankings change from time to time as prospects can shoot up or shoot down..

Blue Valley has to be near the tops in producing Division I talent over the last 10-15 years in Kansas. The Tigers have sent people on to the Big 12, Big 10, SEC, you name it. Not only that they've had several All-Americans at the NAIA and Division II levels. The school has no shortage of football recruits.

There wasn’t a lot of talk about Richman last football season either as he burst onto the recruiting circuit this spring and summer. Richman was one of the most under-rated players in the state last season as a  junior, earning second team All-EKL honors. Making all league first team in the EKL is a harder task than all-state teams by classification with the loaded product the league puts on the field. He did rack up 32 tackles, five sacks and nine TFLs from his defensive end spot.

Although he may be one of the top offensive lineman recruits in the country he has his sights set on a big 2019 season for the Tigers, not only as an individual but as a team. The Tigers return four starters on offense and three on defense. The EKL is no joke either as it features the best competition in Kansas. Blue Valley North won the 6A state title in 2017 and took runner-up last season in 6A. Aquinas won the 5A state title in 2018, while Mill Valley went back to back in 2015 and 2016. Miege has won the last five state titles in 4A. Blue Valley may have had a bad record (4-5) on paper but anybody that knows anything about the league knows that it’s a very hard feat to go over .500 in the EKL.

Richman also gets it done in the classroom with a 3.9 GPA and his favorite subject is Physics. He lists every player on his team as a key player whether that’s one of the top players in Kansas like himself or a scout team player. Richman knows the value of team and what it will take to put the Tigers back on the map in 2019. Beau Palmer is also another high level player of the Tigers we caught up with this summer and will contend for all-state honors along with Richman.  We caught up with the outstanding senior student athlete below in the latest Q&A edition of Faces in Kansas.

Special thanks to the Blue Valley Touchdown Club for their support of Sports in Kansas over the last several football seasons. Good luck to the Tigers in 2019!

Chet Kuplen, CEO/Founder of Sports in Kansas, on Richman

“Honestly I should’ve known more about him last season than I did and that’s my fault. He really jumps off the page once you see him at close to 6’6” and 256 pounds with size but his film is eye opening. But what really jumps off the page is his speed and athleticism mixed with his nastiness, he is very physical. You also have a guy that big that can catch passes and run a 4.9 40. Also has a vertical of over 30 inches. He could be a division one player at a lot of spots whether that’s any spot on the offensive line, tight end or defensive end. Heck if he needed to play defensive tackle he could as he played a lot of interior last year. Blue Valley is one of the best tradition programs in Kansas. You don’t always see that in the city. If you jump of 159th street on a Friday night the place will be rocking I can guarantee you that. Looking for a bounce back season for the Tigers. The league is ridiculous right now and we are at the point where a 4-loss EKL team can win state, we’ve seen it twice already in the last three years.”

I signed up for flag football in 1st grade

The only team beating us this year is ourselves.

I believe that I am such force as a player because I am gifted athletically for my size which is hard to stop at any level of football. I also think that I am gifted intellectually in regards to scheme, game situations, and film study.

The atmosphere at Blue Valley is so incredible that you have to see it for yourself. Our game cheers and pregame rituals have been the same for a couple of decades now and I for one do not expect those to change in the coming years.

Every Friday night is going to be a slugfest in the EKL so the game will keep you on your feet all night. You can always feel emotions before the game that continue through kickoff. I have been coming to the games since I was in elementary school and every week proves to be even better than the last.

Every player on our team is a key player for us this year and each and every day we hold them to that standard. Whether the kid is scout team quarterback or the number one ranked player in Kansas, we need them to help this team win in some fashion.

The brotherhood, I hang out with these guys more than my family and I would not want it any other way, I have gotten the chance to meet around 150 of my best friends in only 4 years at Blue Valley.

Playing for Coach Terrell is like playing for your boss who also happens to be your dad. At times he is going to get on you to get stuff done either in the classroom or on the field but you know that in the end he is only doing it because he loves you.

I am going to play Tackle at the University of Iowa.

Golf, hang out with friends, play NCAA football, and spend time with my little brother.

My role model is Alex Totta, he was an all-state person and athlete who lived and breathed black and gold helping make this community better no matter what he did.

Jazz, the original one.

I beat Clayton Power in an eating contest last week.

I plan on Graduating Early this December.