v Faces in KS: Joshua Hull - Sports in Kansas 
Warning: include(../includes/bodytag.php): failed to open stream: No such file or directory in /home/kansass/public_html/ks/news/index.php on line 36 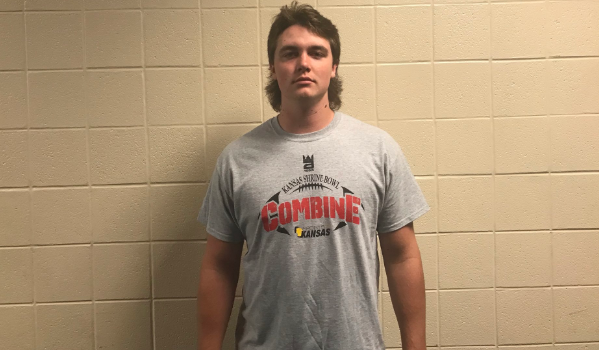 If you have followed high school football in southeast Kansas, the past three years then you have probably heard of Humboldt’s Joshua Hull.

Last year he led Humboldt to an 11-1 record which included a 2A state semi-final appearance. During the 2018 season, He put up some very impressive numbers at defensive end recording 23 tackles, six tackles for loss and three sacks. While he was on the offensive line the Cubs averaged 48.6 points per game and over 4,400 yards of total offense with 75 touchdowns for the season.

As a result of his efforts, Hull garnered Tri-Valley all-league honors at both positions in addition to being named all-state defensive end by the Wichita Eagle and Sports in Kansas.

In addition to football he also stars for Humboldt at power forward in Basketball and DH in Baseball. In Baseball Hull and the Cubs have reached the state tournament the past two seasons.

At 6-foot-6 and 260 pounds Hull possesses a great frame to play at the next level whether it be at defensive end or offensive tackle.

When asked about his interests at the next level he stated, “Currently, with a couple offers from junior colleges, I will continue to talk with all coaches that show interest. I would like to continue playing football at the next level and will look into programs that have shown interest and seem to be a good fit for me.”

For now, Hull and his teammates are focused on their goal of winning a state title this fall as they have been putting in a lot of hard work this summer.

“We have really hit the weight room hard this summer,” Hull stated. “I think I have finally got the boys to eat a little more than a bird, so we will see our team has grown in strength and power this season. I personally, have attended several prospect camps, KSU, University of Northern Iowa, Fort Hays State University, Sports in Kansas Shrine Bowl Combine, Sharp Performance Combine, Blue and Grey Combine, with Western Illinois and Emporia State camps and Baker University workout to round out my summer.”

The Cubs and coach Logan Wyrick certainly have a lot to be excited for this Fall considering they return nine starters including Hull from last year’s 11-1 team.

Most of their key players are back as well which will provide Humboldt with some strong leadership. Some other names to look out for according to Hull are: Running Back Conor Haviland, Wide Reciever/ Cornerback Isiah Coronado, Defensive End/Center Taylor Lassman and Defensive Tackle/Offensive Guard Joseph Froggatte.

If you are wanting to keep an eye on Hull and the Cubs they open the season on Friday, August 30th against the Burlington Wildcats.

Chet Kuplen, CEO/Founder of Sports in Kansas, on Hull

"He's stil a little raw and has a lot of room for improvement but there's no question he has the size and potential to play college football. I wouldn't be surprised to see some FCS offers come in for him this season. He will need to get a bit stronger and explosive in the weight room, which he has this off-season, but he does have a lot of athleticism/speed for a kid on the line. He finishes blocks as a tackle and is always going to the whistle. He's a great kid that I've gotten to personally meet and talk to at a few camps/combines this past school year and summer. They return I believe four starters on offense and five on defense, so they lost a pretty good chunk of studs last year but return a solid cast as well. Should still be the top team to beat in the TVL. On another note, go check out Humboldt's sports facilities, unreal for any level in Kansas. I played against them way back when I was in high school and the field was a baseball/football field, which was cool and historic at Walter Johnson Field, but what they have their for a 2A school is unlike any other 2A's for all sports. Theres a lot of excitement over there right now with their first ever semifinal appearance last year. Will be interesting to see how they follow that up in 2019."

How did you get involved in football? When I was in kindergarten and Coach Taylor gave us football time in gym, but we couldn’t start organized football (flag) until 1st grade. I have loved it ever since.

What are your goals this season? To win a State Championship.

Do you guys have a shot to make a run this year? I believe everyone has a shot. If you can get everyone on your team to “buy-in” there is no doubt in my mind that we can go deep into playoffs.

What makes you such a force as a player? My ability to overcome and being able to turn it on and off.

What’s the atmosphere like to play football on Friday night for your school and town? It’s the greatest feeling in the world. When you walk-out of the locker room door, stand in the tunnel and listen to the beat drop to run out, there is nothing better. Fans are going crazy as the game goes on. Wow just Wow! Cub football fan base is amazing! The support they showed during playoffs last year with the long distance travel was greatly appreciated.

For anyone that hasn’t seen one of your games, why come to one? Honestly, just breathe it in. In Humboldt there is a lot going on, on Friday nights at the field, pork burgers grilling, lemonade sales, younger kids playing football in the courtyard. Once the ball is kicked off at 7 everyone is in their same seat every week cheering on their home town team, The Humboldt Cubs.

Who are other key players on your team? Conor Haviland, Isiah Coronado, Taylor Lassman and Joseph Froggatte.

Baseball – I have been the DH for the past two seasons and we have attended the 3A and 2A state tournaments in ’18 & ’19.

What is it like to play for your coach? Coach Wyrick is like my second Dad, he gets me. Also, he would do anything for me. I cannot begin to explain the countless hours he has spent out at the field alone, just watching film and breaking it down. He can tell me what I did wrong on the play before he even plays the tape. I admire that. To sum it up when I get married or have my first child I am sure he will be there because he is one of the greatest people you will ever meet in your entire life.

What did you and the team do in the off-season to become better? We have really hit the weight room hard this summer. I think I have finally got the boys to eat a little more than a bird, so we will see our team has grown in strength and power this season. I personally, have attended several prospect camps, KSU, University of Northern Iowa, Fort Hays State University, Shrine Bowl Combine, Sharp Performance Combine, Blue and Grey Combine, with Western Illinois and Emporia State camps and Baker University workout to round out my summer.

Where do you see yourself in 10 years? Doing something that I love and providing for my family in a little town called Humboldt.

Favorite subject in school, what type of student are you, GPA? Math/Algebra – I am a hard working student that wants to get it done. 3.0 gpa

Who is your role model? My father, because of his work ethic.

Best place to eat in your town or the surrounding area? Opie’s

One thing the average person wouldn’t know about you? I have a massive collection of baseball cards and I like to blare Motley Crue going down the highway at 65 with all my windows down.

Anything else to add? My brother Sam will be in 8th grade at Humboldt Middle school and is a three sport athlete as well. My sister Laney is entering HMS as a 6th grader and dances and participates in volleyball, basketball and softball.