v Faces in KS: Garron Champoux - Sports in Kansas 
Warning: include(../includes/bodytag.php): failed to open stream: No such file or directory in /home/kansass/public_html/ks/news/index.php on line 36

Garron Champoux is ready for a huge senior year for Marysville. (submitted photo) 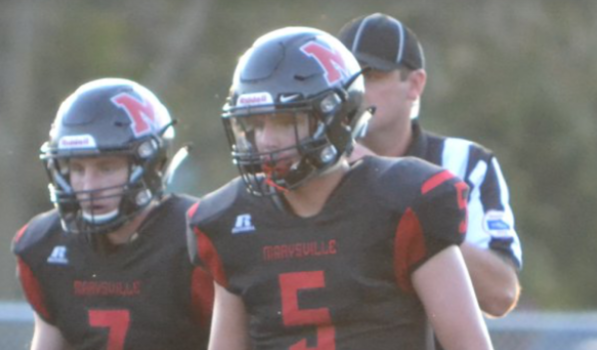 Marysville opened 2-2 after the first month of the 2018 football season. The Bulldogs started with a 34-18 defeat versus Chapman, and then won its next two games by a combined score of 74-6.

In Week 4, the Bulldogs faced Sabetha in a rematch of the 2017 Class 3A state championship game. The Bluejays earned a 36-12 victory and eventually finished 13-0 with another 3A crown. The loss snapped Marysville’s seven-game home winning streak.

Wamego drove down the field, and then Marysville junior tight end/linebacker Garron Champoux picked off the pass to effectively seal the Homecoming victory. It marked his only interception of the year. As well, Champoux finished with 15 tackles, 10 solo, an eventual season high. He forced and recovered a fumble in the contest.

“Ball comes over the middle, and Garron, his hand/eye coordination is insane,” Schroedl said. “Jumps up, picks it, saves the ball game, take a knee, and we win. That’s how I see Garron. He is kind of that superhero.”

Buoyed by the victory, Marysville pulled off six consecutive victories and earned district runner-up behind Sabetha. The Bulldogs lost, 42-36, in double overtime to Galena in the state quarterfinals and finished 8-3.

After Marysville’s defeat, Champoux stood third in Kansas with 144 tackles and trailed only KC Piper’s Branden Martin with 159 stops and Parson’s Joel Schibi with 151 tackles.

“He is always there to make the play,” Schroedl said. “Had a load of tackles last year, big, big guy, big stop, can always rely on him.”

“We have a great coaching staff that spends a lot of time year round trying to make us better,” Champoux said.

Marysville has long been known for its wrestling program, including back-to-back third-place finishes in ’16 and ’17 in Class 3-2-1A. Last year, the Bulldogs bumped up to 4A, and aided by remarkable depth, captured the first wrestling state crown in school annals. The Bulldogs tallied 112.5 points, while Winfield was second with 100.

Marysville was a rare wrestling titlist to win a team crown without an individual championship. Marysville had seven state placers, led by two runner-ups: Storm Slupianek at 170, and Champoux at 195. Champoux earned a sixth-place showing at state wrestling as a sophomore. In track, Champoux finished second at state track in the javelin with a throw of 167 meet, 8 inches in May.

“He is a fantastic athlete and wrestler,” Champoux said. “He is extremely humble for the level he competes at and is also a great man and father. He shares a lot of advice on social media for younger athletes to hear. He is a guy that has gotten beat but nobody has ever beat him twice, he learns from his mistakes and constantly improves.”

On the gridiron, Marysville also has a high number of returners, notably at the skill positions, and the Bulldogs should be a strong contender in 3A. Schroedl, a senior, took over for first team all-state quarterback Jack Blumer. He completed 69 percent of his passes for 1,725 yards and an 18/8 TD/INT ratio.

Running back Atreyau Hornbeak has been a well-known name the last two falls. He collected 155 carries for 1,170 yards and 17 scores as a junior. Marysville received all of his pass attempts, 81 percent of its rushing yards and 44 percent of its receptions from non-seniors.

Defensively, Slupianek finished second with 102 tackles. Hornbeak and Slupianek are the team’s most experienced players and both started as sophomores.

Five of the team’s top-seven tacklers were juniors. Owen Nietfeld and Caden Brinegar returns at wide receiver/defensive back, while Lucas Dankenbring is back on the offensive line. Koby Schroeder is a key player at offensive line and linebacker.

“We are going to be a special team in our school’s history, we have a lot of good athletes on our team and we all get along well and work together,” Champoux said.

This feature is presented by First Commerce Bank. Proud to support Marysville Bulldog Football. Best of luck this season! See our ad in the right corner.

This feature is also presented by Marysville Bulldog Booster Club, proud supporters of Sports in Kansas year-round coverage of the Bulldogs!

Chet Kuplen, CEO/Founder of Sports in Kansas, on Marysville

"They have a lot of key pieces back in 3A. I have probably been pretty guilty of putting a target on their back but when you start to look at what Coach Heuer has done and then guys like Champoux, Hornbeak, Schroedl, Slupianek back how could I not think they are going to be good. These kids have also shined in other sports including a wrestling title. Marysville is a great community and enjoyed our two trips their last fall. Looking forward to seeing their success this year. What coach Heuer has done with this turnaround is amazing. When we started Sports in Kansas seven years ago they were one of the worst programs in the state at the time, now they are one of the best. Sure they were really good 10 years ago but then they went to not winning at all.  Shows you how much work has been done here and I appreciate things built from the ground up again."

Recess as a kid and flag football was the start and I’ve played every year.

Goals are pretty high for this year in every sport.

We have the talent, leadership, and coaching to make a very good run this year

I’m a good sized kid that can move well and love to play my hardest. And those things I think help me a lot to perform my best.

The atmosphere at the historic Homer Hanson Stadium is amazing on game day. We have a lot of fantastic fans in the community that come to all the games and its awesome to have them cheer us on wherever we go.

We are going to be a special team in our schools history, we have a lot of good athletes on our team and we all get along well and work together.

Playing with my Teammates

I also wrestle and compete in track. I have placed twice in wrestling, placing 6th as a sophomore, and 2nd as a Junior. Marysville was the 4A state champions last year and we have a great shot to do it again next year. And in track I was the state runner up in Javelin as a Junior.

We have a great coaching staff that spends a lot of time year round trying to make us better. Coach Heuer has turned Marysville football around. Before he came to Marysville they had lost the last 33 games and a couple years later he coached us to the State championship game. He does a lot with all the athletes as he is also our weights coach. Overall he is a great coach to play with.

We have went to two padded camps at colleges. A week long team camp in the summer. Get  together 2 times a week to go over and run through plays/skills. We have a summer weights program where you can lift 5 days a week. 7 on 7 sessions with Crete, Nebraska.

I have a few coaches talking to me about football at the next level. I would like to play football in college.

I see myself still living in the midwest, with a young family. I will be finished with college working at a good job where there’s opportunities for advancement.

Math. I’m a smart kid but I tend to procrastinate work till the night before. 3.65 cumulative GPA

Jordan Burroughs, he is a fantastic athlete and wrestler. He is extremely humble for the level he competes at and is also a great man and father. He shares a lot of advice on social media for younger athletes to hear. He is a guy that has gotten beat but nobody has ever beat him twice, he learns from his mistakes and constantly improves.

I have a personal side business selling farm fresh eggs locally.