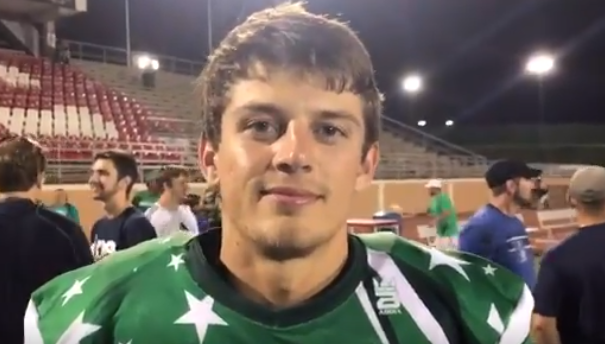 In his final high school outing as a Phillipsburg High School Panther, Trey Sides shined in the 2019 Kansas Shrine Bowl. Sides, who was a high school quarterback with two state titles as a starter, played wide reciever in the 2019 all-star game earlier this month in Dodge City for the west squad. He could have easily turned down the option to play in the game as most Division I basketball players (Sides has signed with Jacksonville) would due to injury prevention but that didnt stop Sides who has been one of the best multi-sport all-state competitors in Kansas over the last four seasons.

Sides caught a touchdown pass and also threw a big pass on a trick play for the West squad that involved a handoff from Great Bend quarterback Koy Brack to Pratt running back/quarterback Travis Theis to Sides who hit Parker Roth of Hesston on a 35-yard pass. Tommy Beason, Goddard head coach and West assistant, referred to it as the "rope swing" in the Wichita Eagle after the game. Rope Swing ultimately coming from Travis Theis who's twitter video saw millions of views of kids from Pratt on a rope swing just before the Kansas Shrine Bowl.

Sides showed what type of athlete and competitor he was by adapting to play any position he was needed to at the 2019 game.

"It was fun. It was a really cool experience. Since I was nominated I wanted to play in this game no matter what." Sides told Chet Kuplen of Sports in Kansas in a postgame interview.

Sides won a state title as a freshman starting quarterback at Phillipsburg and also capped off by winning a state title as a senior. He was also the 3A Sports in Kansas Basketball Player of the Year as a junior in 2017-2018 after leading his squad to a state runner-up finish.