v 2019 Sports in Kansas 6A All-State Baseball Team - Sports in Kansas 
Warning: include(../includes/bodytag.php): failed to open stream: No such file or directory in /home/kansass/public_html/ks/news/index.php on line 36 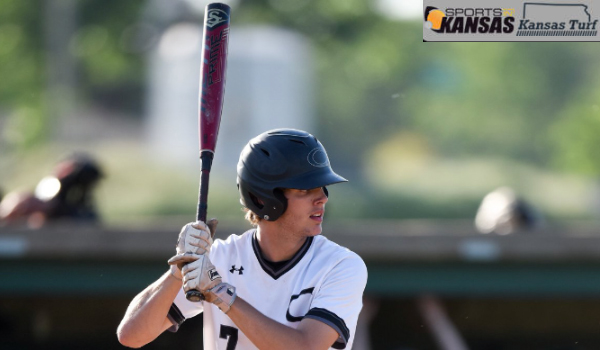 2019 Sports in Kansas 6A Baseball Player of the Year

In 25 games, Leslie went 46 of 96 (.479 average) at the plate and set a single season school record for hits. Leslie delivered 15 extra base hits, including three homers and 23 RBIs and 37 runs scored. He carried a .514 on-base percentage and a 1.274 on-base plus slugging  percentage. On the mound, he worked 58 innings with an 8-1 record and 2.65 ERA with a 59/13 strikeout to walk rate. Top-seeded Campus captured the Class 6A state title with a 23-2 record. The Colts defeated rival Derby, 5-1, in the first round, then beat Mill Valley, 3-1, in the semifinals. In the championship, Campus held off Lawrence Free State, 3-2, in nine innings. Last year, Leslie hit .418 with 41 hits and seven triples, along with a 5-2 record and 2.71 ERA. Leslie was arguably the best overall player in any classification of Kansas for 2019 with his combination of pitching and hitting.

2019 Sports in Kansas 6A Baseball Pitcher of the Year

Ethan Bradford, Free State, Sr.
A left-handed senior, Bradford capped an excellent season with a 2-0 complete game shutout against Olathe East in the first round of the Class 6A state tournament. Bradford, a Nebraska signee, also collected Class 6A Pitcher of the Year by the Kansas coaches, and the Eastern Kansas League Pitcher of the Year award. In the OE victory, Bradford permitted just two hits and defeated a squad that had beaten Free State earlier in the year. FS lost to Campus in the state championship and finished 21-4. Bradford also worked a no-hitter earlier in the year. He also just recently threw two scoreless innings in the KABC All-Star game.
--

Clasen has helped Campus to a big turnaround. Two years ago, the Colts were 6-14. Last year, Campus finished 16-8 with a final four showing in Class 6A. This season, the Colts took another step with the state title. The Colts were the No. 1 seed and finished 23-2. Campus defeated Free State, 3-2, in nine innings to win the title. Junior Austin Warkins delivered a walk-off single to plate Rylan Walter for the game-winning run. Campus was the first non-Kansas City area team to win a 6A baseball title since Maize in 2011. It was a remarkable season for Campus who also won an extra inning game in the regional championship over Junction City to get to state, 13-12 (12 innings).

2019 Sports in Kansas 5A All-State Baseball