v 2019 Sports in Kansas 4A All-State Baseball Team - Sports in Kansas 
Warning: include(../includes/bodytag.php): failed to open stream: No such file or directory in /home/kansass/public_html/ks/news/index.php on line 36 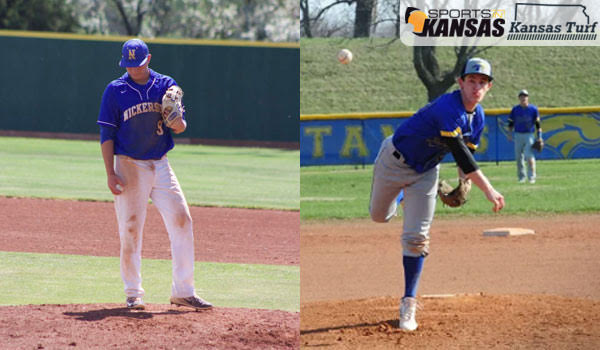 2019 Sports in Kansas 4A Baseball Player of the Year

Cornelius had a remarkable season as Nickerson won three games in one day to capture the Class 4A state title.  The 6-1, 190-pound Cornelius batted .527 with a 6-0 mark and 0.72 earned-run average. Cornelius also earned 4A Player of the Year from the Kansas coaches, first team all-state pitcher and second team all-state second baseman by the Kansas coaches. Cornelius is planning to play baseball at junior college power Barton County. He recorded two hits in the championship game against Reno County rival Buhler.

Nickerson High School and the athletic department would like to congratulate all of the Panthers on their 2019 4A State Title! We are proud of you!

2019 Sports in Kansas 4A Baseball Pitcher of the Year

A two-time Sports in Kansas Pitcher of the Year, Bycroft went 7-0 in 41 innings. He permitted just 21 hits with a 50/10 strikeout to walk rate. Committed to Oklahoma Wesleyan University, Bycroft batted .481. The 5-11, 175-pound Bycroft was a four-time first team all-league pitcher and thrice collected first team all-state. He was the Pitcher of the Year from the Kansas coaches, too. Last year, Bycroft led Iola to the 4A-II state title with an 8-0 record and 0.73 ERA. He combined to be 15-0 over the last two seasons. While Iola didn't reach state this season, when Byrcroft was on the mound the Mustangs were nearly untouchable over the last two seasons.

Iola High School would like to congratulate Derek Bycroft on earning SIK 4A Pitcher of the Year. Congrats to all of the Mustangs honored in 2019!

Nickerson (19-2) had a wild run to the Class 4A state title that featured three games and 11 hours of baseball in one day in a weather-delayed tournament. McCue led Nickerson to its fifth ever state title, first since 2002, and also earned Coach of the Year honors from the coaching association. Nickerson defeated Tonganoxie, 6-5, in the first contest, then beat Mulvane, 7-6, on a walk-off single from Tanner Schrag. Versus rival Buhler, Nickerson won 8-7 in a tournament that was shifted from Salina to Maize because of heavy rains. McCue, in his second season as head coach, led Nickerson to a 19-0 start and No. 1 ranking in the Class 4A, Division II tournament last year. However, the Panthers lost to No. 8 Anderson County in the first round of state and went 21-2 before the comeback and state crown this year. Nickerson had graduated seven seniors off last year’s team.

Nickerson High School and the athletic department would like to congratulate all of the Panthers on their 2019 4A State Title! We are proud of you!

2019 Sports in Kansas 4A All-State Baseball