v Craw-Kan Team of the Week: Colgan & Frontenac - Sports in Kansas 
Warning: include(../includes/bodytag.php): failed to open stream: No such file or directory in /home/kansass/public_html/ks/news/index.php on line 36 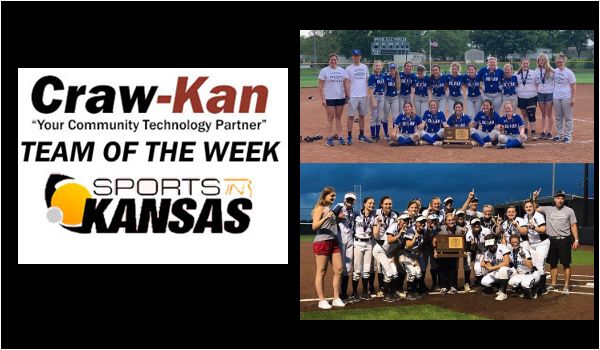 This weeks Craw-Kan "Your Community Technology Partner" Team of the Week from the Southeast Kansas coverage area goes to two teams who brought home state softball titles in the St. Mary's Colgan Panthers and the Frontenac Raiders.

Both teams captured their second state softball titles in school history as the Panthers won the 2-1A crown in Pratt on Friday while the Raiders won the 3A title on Monday in Lawrence after an entire weekend delay in Emporia. Colgan, led by first year head coach Annie Dellasega, knocked off Oskaloosa 10-7 in the final. Sophia Piccini and Kaitlin Crossland had huge outings for the Panthers. Crossland, who will contend for 2-1A Sports in Kansas Player of the Year honors at Sports in Kansas, not only picked up the pitching win but had three hits including a grand slam home run with four RBI. Piccini had three hits and four RBI. Ella Batitotori, Taylor Wixson, and Alli Marietta also all had multiple hit games for the Panthers. Kate Radell also made 11 plays in the field for the Panthers while the team didn't commit a single error. Piccini, Radell, Ashley Marietta and Delaney Cedeno had big games in the semifinals with two hits a piece against Jayhawk Linn with Ash. Marietta leading the squad with three RBI and Olivia Brynds also picked up a double. Marietta, another all-state candidate, also had four RBI in the quarterfinal on three hits. Frontenac, led by longtime head coach Cassie Rhuems, won 7-5 over state power Silver Lake in the 3A game. Junior Karma Fields, a serious contender for the 3A Player of the Year from Sports in Kansas which will be announced next week, picked up two doubles and three RBI for FHS while also getting the win in the circle for the third game in a row at state. Freshman all-state candidate Heather Arnett was nearly impossible to keep off the base paths for the Raiders as she scored three runs on two hits and made several clutch plays in the infield at short stop. Junior Bailey Rhuems also had two hits and senior Madison Davis was solid all tournament for the Raiders including two hits in the semis. Raven Warren also had two hits in the semifinal. Bria Ginavan, Morgen Hipfl, Kate Walrod, Jayden Wilderman and Emma Jessip also had big tournaments. The Raiders last won a title in 4A-II in 2016 and what's even more impressive now about their 3A title its' almost like a combined class of 4A-II/3A. There are only five classes in the entire state of Kansas and the CNC league picks up two of those state titles.

Craw-Kan would like to congratulate both teams on the 2-1A and 3A state softball titles.