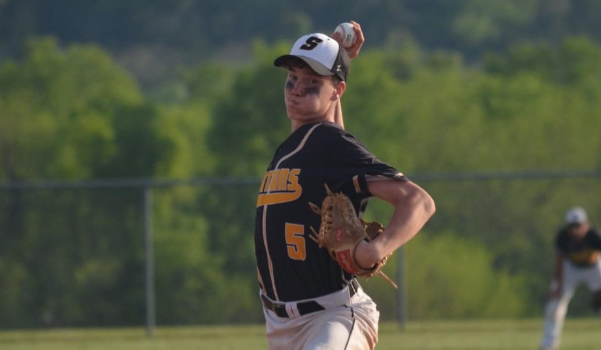 Catlin can also swing it as he has 16 hits this season and 14 RBI while hitting .327. He has hit over .300 in each of the last three seasons and has his entire senior season remaining in 2020.

For his efforts, last season Catlin was named a second team all-state selection in the infield ater hitting .328 as a junior in 2018.

Catlin also had a solid basketball season as he earned all league SCBL and honorable mention all-state ater averaging 14.0 pprg, 3.4 4pg, 2.2 apg and shot 46 percent from the three-point line.

For now Catlin is set on getting his Cedar Vale-Dexter baseball team, led by head coach Luke Wachter, into the 2019 2-1A KSHSAA State Baseball Tournament. CVD has a 15-2 record entering by KSHSAA seeding set last week as the #1 seed in the Bluestem regional. Udall/Oxford have a play-in game with the winner moving on to take on Cedar Vale/Dexter at 3:30 pm on Monday.

We caught up with Catlin below in the latest Q&A edition of Faces in Kansas.

This feature is powered by Simply Trends, proud to support Cedar Vale/Dexter Baseball and Devin Catlin. Best of luck. See our ad in the right corner.

I started playing baseball when I was seven in Wichita, I just fell in love with the game at a young age from seeing It on TV.

The goal is always to win league, but I want to get back to the state tournament and win it all!

I definitely believe we have a shot at state, and if we can get there, I believe we can make a splash!

At a young age I was always shorter and smaller, so I had to work twice as hard to keep up with other athletes, so I would say my work ethic.

For a small town we have great fans and a great community that would give anything for one another.

Our team has great players and we work as a unit, that’s what makes us a special team!

My biggest strength is my leadership and my drive to win in everything I do. My weaknesses are probably my competitiveness, I hate losing and it gets the best of me at times.

I played in the summer growing up but not currently. I currently play AAU basketball in the offseason

Brady Snyder, Arik Artherton, and Jasper Young, to name a few. Really all the guys because they give me support when I’m on the mound!

My favorite thing is definitely the post season, the win or go home games. They make the atmosphere energetic and give everyone something to play for.

It is unreal, going my Freshman year at Oxford really drives me to get back.

Coach Wachter is fun to play for, he’s super laid back but very knowledgeable about the game. He has also won state titles as an athlete so he knows what it takes to get to the State tournament.

Morning weights as well as throwing throughout the summer. Pretty much every athlete that has success in our school works out at least three times a week throughout the entire summer.

So far, I have only been in connection with college basketball coaches, no baseball programs have shown interest. I haven’t decided on which I would rather play, it just comes down to what offers in what sport I get down the stretch. I would love to pitch at the next level.

My favorite thing to do outside sports is get out on the lake in my kayak and fish.

In 10 year’s I see myself either coaching or kicking off my career as an Athletic Director.

My favorite subject is probably History. I am not the smartest kid in my school but I try to make up for it with my work ethic. I take multiple college classes and my GPA is a 3.6.

My dad is definitely my biggest role model when it comes to sports. He taught me everything I know about sports and how to be competitive.  My mom is also one of the most genuine people I know, she taught me how to treat people.

There is only one restaurant in Dexter, but in Winfield Pizza Hut is my go-to.

Even though I live in a small town I was raised in the city, so I like rap music.