v Faces in KS: Andrew Schmidtlein - Sports in Kansas 
Warning: include(../includes/bodytag.php): failed to open stream: No such file or directory in /home/kansass/public_html/ks/news/index.php on line 36 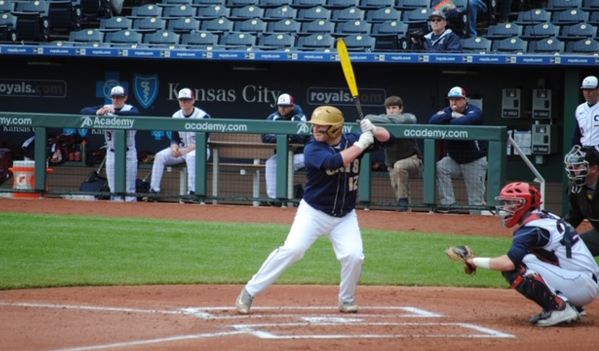 Andrew Schmidtlein, a 5-foot-9, 215-pound, junior, at Hayden Catholic High School in Topeka, is looking to be one of the top baseball players in the state of Kansas this spring

Last season, he was one of the top sophomores in the state of Kansas after earning first team all-state honors from Sports in Kansas after hitting .482 with 20 RBI, five doubles and 27 hits.

Schmidtlein is a third baseman primarily but can also give you some innings on the mound with a fastball in the lower 80s as a sophomore last spring. He threw in 35 innings last year while striking out 35 batters on the way to a 2-2 record.

Hayden plays in one of the best baseball leagues in Kansas and went 10-11 overall last year with a 9-9 league record. The record doesn't look flashy but anyone who knows anything about the league in baseball with powers like Seaman understand its battle tested with top notch talent. The Wildcats will look to improve upon last season where they finished just under .500.

Schmidtlein is also a defensive tackle in football with his 215-pound size. He had 127 tackles on the way to earning Sports in Kansas Non-Senior honorable mention. He also gets it done in the classroom with a 4.3 GPA and hopes to some day work in the medical field as a doctor.

For now, his focus is on baseball as we caught up with the junior looking to have a big season in 2019.

I grew up around it. I spent most of my childhood at the ballpark, whether it be playing or watching my older siblings play.

I want to beat all of my records from last year. But most importantly I want to help lead Hayden to the state tournament.

Yes, I believe we do. We have a lot of guys stepping up and filling some spots from last year’s team. We have a good group of scrappy ballplayers.

Being able to break the game down play by play. And using the mental side of the game to always be prepared.

Hayden is a great atmosphere because we are a tight knit school that supports each other. It can be compared to a rowdy family when it comes to cheering at the games.

We have a lot of fun when we are playing. We have a great team bond and bring a lot of energy.

My strengths are being passionate about making the players around me the best they can be, hating losing, and being able to use the mental side to be prepared for any scenario on the field. My main weakness is not always being a vocal leader.

Yes, I play for the Midwest Bruins 18u team. It is a good experience that is designed to prepare us for collegiate level baseball.

I love baseball because it is a team sport that is just as much mental as it is physical.

It is a sweet experience, but it would have been better if we had made it further.

It helps me to push myself. He is a firm believer in doing things the right way and working hard.

We had morning weights starting in the beginning of January until the start of the season.

I would like to play at the next level but have not received any official offers.

Spend time with my family and friends.

Favorite subject is science. I am a dedicated student. I have a 4.3 GPA

My Brother is my role model. He was always a small kid growing up but he worked hard and ended up being a pitcher at Washburn University. He always pushes me to work harder and to be the best version of myself I can be.

The Pad. They have great burgers and onion rings.

That I want to be a doctor.