v Faces in KS: Jackson Dwyer - Sports in Kansas 
Warning: include(../includes/bodytag.php): failed to open stream: No such file or directory in /home/kansass/public_html/ks/news/index.php on line 36

Dwyer has had a big senior season for the Eagles. (Julia Delgado) 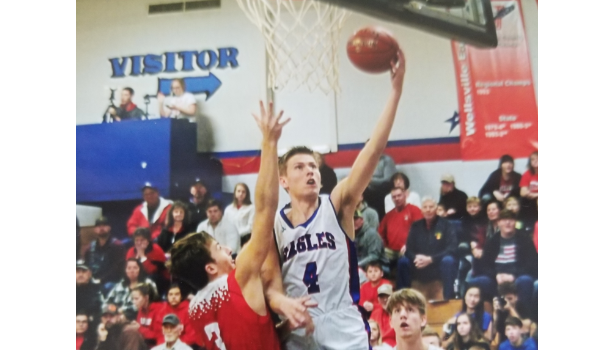 Jackson Dwyer has had a breakout senior campaign for the Wellsville Eagles in 2018-2019. The 6-foot-2, 175-pound, senior, guard, is averaging 21.4 points per game, seven rebounds and 2.6 assists per game this season.

He’s not just a one-year wonder either as he had a big junior campaign last season in scoring 17 points per game and contributed 4.3 points per game as a sophomore on the league champion squad. But this season, Dwyer has taken over and has been deadly from three with a 45 percent percentage. He’s also played very solid defensively, taking 11 charges this year. He holds the school record for number of charges drawn. With his length, he is able to guard all five positions in high school basketball.

Dwyer is also a two-time state qualifier in golf and will look to make it a third this spring. He also gets it done in the classroom at Wellsville High School with a 3.97 GPA.

Basketball is in the Dwyer family. In fact, older sister, Sydney, was featured on Faces in Kansas as an all-3A pick a season ago at Sports in Kansas. Oddly enough, she was also featured on February 26th last year when going back in the archives today to do a search. His father played basketball for years, his uncle is the head coach at Eudora and his grandpa coached for several years at Wellsville.

Grandpa Kermit Deterding won 431 games while coaching at Wellsville High School, including state titles in 1987 and 1994. He retired back in 2002 from coaching at Wellsville after 29 years. Some of those teams featured the likes of players like Brent Dorsey who still had some state records the last time we had looked and was an all classifications player of the year in the state of Kansas. Uncle Kyle Deterding, also a star player on those Kermit coached teams, is the head coach at Eudora High School.

While Dwyer may pick up several individual accolades, his ultimate goal is to get his team to the 3A state tournament. That starts tonight as the Eagles (11-7 sub-state seeding record), led by head coach Rick O’Neil, open up 3A sub-state play with Jefferson West (9-10) at home. A win would put them likely against #1 seed Perry Lecompton (17-2), who is also the 3A host for the sub-state.

We caught up with the senior guard below in the latest Q&A edition of Faces in Kansas.

Layton Real Estate in Wellsville is proud to support yearly coverage at Sports in Kansas for the last several seasons. Best of luck to the Eagles in all sports this season!

My family has always been basketball oriented. My dad played basketball all the way through high school. My uncle is the head coach of Eudora, and my grandpa coached for years here at Wellsville. My sister always played competitively.  I have played the game for as long as I can remember and too many hours to count were spent in gyms.

My goals for the rest of this season is to just play hard and take it one game at a time and see if we can get out of our tough sub-state and earn some state experience.

I believe when we are playing well as a team and things are flowing, we can contend with anyone. But we must continue to work hard and play together as we head into sub-state.

My ability to get to the rim and then if there isn’t a good opportunity to score, then I can always trust my teammates to knock down the open jump shot.

The atmosphere here is amazing. Everybody comes out whether they have kids playing or not. Every game we play is a home game to us, because of how many people support us.

You would want to come watch Wellsville play because you would see a team that doesn’t give up no matter what the score. We are always giving it 100%.

My strengths would be that I am a versatile player, being the tallest player on my team at 6’2 I had to learn how to play a little down low and defend all 5 positions. I love to shoot outside but I can also get to the bucket well and finish through contact. I will always continue to work on improving my defense, especially on players that are taller and bigger than me.

I feel that every player on my team has their own unique role, and we are very successful when everybody does their job.

My favorite thing about basketball is getting to play a game that I love with people I love. Some of the best memories I have throughout high school have happened on our gym floor.

I also play Golf, I am a 2-time state qualifier my sophomore and junior year.

It is a “get down to business” type of play. Play hard or not play are the options we get. We respect him more than anyone, because he doesn’t just shape us into basketball players, he shapes us into respectful men. His motto is “Respect everyone, Fear no one.”

We spent countless hours in the gym getting shots up. We played summer ball as a team to get us ready for the season and get the team chemistry down. I also played for a competitive team out of Kansas City this summer and fall to improve my game.

I haven’t yet decided on my plans for college, but I am open to any opportunities that come my way.

My favorite thing to do outside of sports is anything that has to do with being outdoors. I love to fish, hunt, spend time with the family at the lake and on vacations. I am a very social guy who loves to hang with friends and get out of the house.

In my future I see myself doing something involving sports whether it be a coach or an athletic trainer. I see myself with a major in business and sports management.

Math is by far my favorite subject, because it allows me to think outside the box, but I am also really enjoying my anatomy and virology class. My GPA is 3.97.

While I have many people, I look up to and admire, one role model that comes to mind is my Grandpa Kermit. I choose him over anyone else because he has taught me so much about the game of basketball as he was the coach for Wellsville for over 30 years. He also introduced me to the game of golf and is now my high school golf coach and has taught me to take nothing for granted and give everything to God.  As a retired teacher he still comes back to school to lead our FCA group.

I am very adventurous. I like to take risks; most people wouldn’t even think about doing.