v Faces in KS: Reagan Kirkwood - Sports in Kansas 
Warning: include(../includes/bodytag.php): failed to open stream: No such file or directory in /home/kansass/public_html/ks/news/index.php on line 36 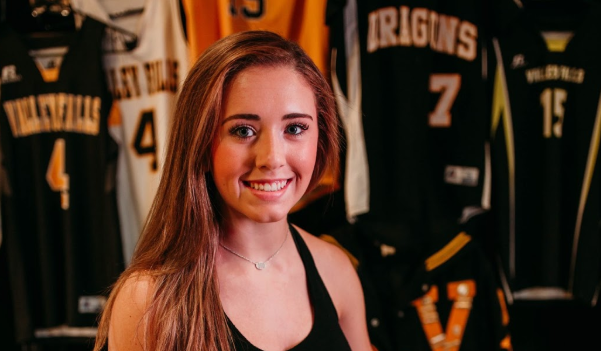 Reagan Kirkwood, senior at Valley Falls High School, is putting together quite the senior year. On the 24th of January she went over the 1,000 point milestone in her career.

Kirkwood has grown up around basketball and learned to love the game. She lists her grandpa, the late Gary Kirkwood, as her role model. He passed away last April and took Reagan to basketball games games growing up and was a die hard fan.

She is a lock down defender that has great knowledge of the game that can also score. Kirwood, a three year starter, has twice been named all-state in her classification. Valley Falls has struggled this year but they've battled every game and have just seven players out for basketball at their Class 1A high school in Northeast Kansas. She has scored over 30 in five different games this year, including 32 last night.

Kirkwood is also an outstanding student that has a 3.9 GPA and plans to be a physical therapist eventually. She also had several collegiate programs interested in her to play at the next level for basketball. She ultimately chose Peru State in Nebraska where she will play next season.

She’s not just a basketball player either as she is a multiple sport athlete also playing volleyball and softball. She was the short stop on the schools first ever softball state championship team as a freshman in 2016.

We caught up with the outstanding senior student athlete below in the latest Q&A edition of Faces in Kansas.

This feature is presented by Malls Barber Shop. Proud to support Valley Falls Basketball. Best of luck in 2019!

-I have been playing basketball ever since I was a little girl in our town’s school league. My father, along with other teammates’ parents, began taking us to competitive tournaments. I then found a traveling team named the Lady Prospects and played with them for two years.
What are your goals this season?

- My goal this season is for the team to go as far as we can and try to win and compete in each game we play.

-My team has exceeded expectations from the start of the season, so that alone has been a great accomplishment. I’m not sure where we will end, but I know we will try our hardest to succeed.

- I think I have an aggressive defense and I am knowledgeable player of the game of basketball.

- The feeling is like no other! It has been an honor to play as a Valley Falls Lady Dragon . I will miss playing in front of the community that has supported me throughout my high school career.

- people should come see one of our games because we only have 7 players on the team, so most of us play full games with very few breaks.

- strengths are my defense, knowledge of the game, and dribbling with both hands effectively. Weaknesses are my size, length, and strength.

- Two key players on my team are Jaci Brinker and Laikyn Hawk. Jaci helps with defense because she is quick and long and is able to handle the ball as well. Laikyn helps around the perimeter by knocking threes down as well as getting rebounds and put backs.

-My favorite thing about basketball is playing on-ball defense and trying to steal the ball fro, the dribbler. Also, playing in front of my community is a big factor for the love of the game.

- I also play softball and volleyball. For volleyball, I am an outside hitter. Our volleyball team hasn’t been to state, but we have come close to it many times. Softball on the other hand is a different story. I was playing shortstop as a freshman when my team won our school’s first state championship in in Pratt, Kansas.

- Jordon Hale is my 3rd coach in 4 years. Intensity, hard work, and fast pace is always the gams plan, which I like. Jordan instills shooting confidence and aggressiveness every single day. She works us hard in practice and is one of our biggest supporters during the game.

-My team got up in the morning and went to weights 3 days a week at the school. We also played in a summer league in Silver Lake. We played pretty well for played bigger schools there.

-I have committed to Peru State in Nebraska. I chose this school because it reminded me a lot of back home. It’s fairly small, but that’s exactly what I’m use to. It’s about an hour and a half away from my house, so my parents will be able to travel up and watch me.

-My favorite thing to do when I’m not playing sports is to hang out with friends and family. There’s not very many things to do in my town, so we drive around a lot while blaring the music.
Where do you see yourself in 10 years?

-In 10 years, I see myself as a physical therapist and living in or near my home town of Valley Falls.
Favorite subject in school, what type of student are you, GPA?

-My favorite subject in school would be either English or conditioning, which is a weights class. I would consider myself as an organized student. I’m not the top of my class, but I’m a little above average. My GPA is a 3.9.

-My role model is Gary Kirkwood. He is my grandpa and who passed away last April. He took me to a lot of my games, and was always at my games while growing up. He was a die hard basketball, and Kansas State fan. Every time I shoot a free throw, I think of him because he use to talk to me all the time about missing free throws.

-The best place to eat in our small town is Stewart’s Ole Smokehouse on our Main Street. I use to waitress there and they serve the best BBQ. My favorite food is the pulled pork and fried pickles.

- The average person wouldn’t know that I like to play board games with a strategic element.