v Faces in KS: Bo Gooch - Sports in Kansas 
Warning: include(../includes/bodytag.php): failed to open stream: No such file or directory in /home/kansass/public_html/ks/news/index.php on line 36

Bo Gooch is one of the top 3A players in Kansas. (photo: Angela Cooper) 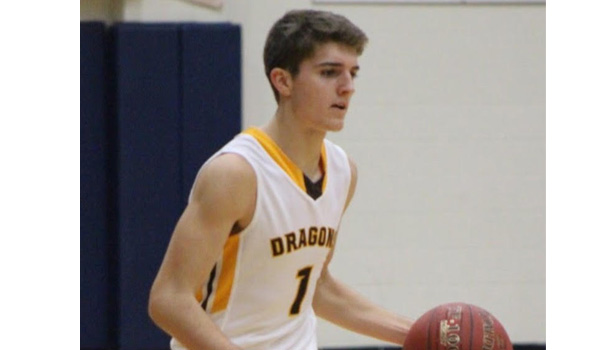 Bo Gooch of Belle Plaine High School, located outside of Wichita, has been one of the top small school basketball players in the state of Kansas since his sophomore year.

Gooch also had a solid year in football as a senior in which he threw for 1,895 yards with 18 passing touchdowns. He also rushed for 266 more with three scores, earning all-state honorable mention honors. He helped Belle Plaine to a four win season, which hasn't been common for the schools program that has struggled over time.

Belle Plaine has also seen a lot of basketball team success as they finished 18-5 one year ago and as a sophomore Gooch helped lead them to a 3A state runner-up finish with a 16-10 record, coming out of nowhere to get a first round upset over Galena, 63-62. They would eventually fall to state champion Marysville in the semifinals and Southeast of Saline in the third place game.

Gooch has had multiple opportunities to play basketball at the junior college and NAIA level but currently thinks that he may not play at the next level. He has a perfect 4.0 GPA as a student and his favorite subject is Physics. His plan is to eventually work as a Cyber Security Analyst in the future unless he starts his own business.

Currently the Dragons, led by head coach Josh Corbett, are off to a 9-1 mark in 2018-2019. They are in the Chaparral Tournament this week where they will face Mulvane in the opening round.

Belle Plaine, who plays in Class 3A, is currently 9-1. They are also ranked #3 in the latest Kansas Basketball Coaches Association Poll (KBCA). We caught up with the senior standout below in the latest Q&A edition of Faces in Kansas.

Been playing ever since I was little.

We have the talent to make some noise at the end of the year.

My shooting ability and decision making.

Our gym is usually packed and close games get loud.

We play fast and put up a lot of points.

Fun. he opens up the offense and just lets us play

We played in a couple of tournaments together and did some shooting practice.

I've received from multiple NAIA schools and a couple of JUCOs but I don't plan on playing basketball in college.

Hanging out with friends and playing Xbox

My favorite subject in school is physics. I'm a 4.0 student.

My role models are my 3 older brothers