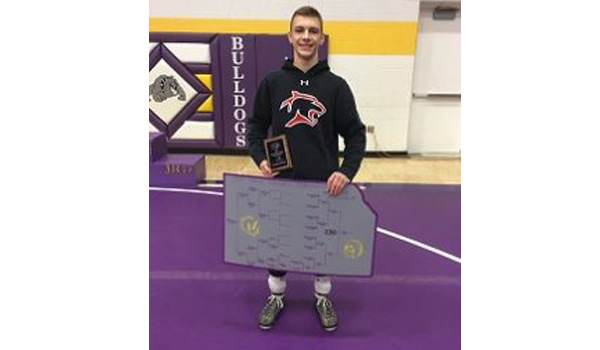 At the start of the season, Great Bend was ranked ninth in Class 5A and junior Drew Liles was fourth at 120 pounds.

However, Liles is currently ranked second at 120 and GB has moved to seventh in 5A with coach Nathan Broeckelman, a successful wrestler at powerhouse Norton and former coach at Tribune-Greeley County.

Last winter, Liles took third at state at 113 with a 41-8 record and was the top finisher for GB.

Liles was ranked fourth on Dec. 4 but then leaped to first in the Dec. 11 and Dec. 18 rankings. He currently only trails Newton’s Grant Treaster in the rankings. Liles is part of a highly talented junior class for the Panthers.

GB won the Valley Center and Douglass tournaments and performed well at the Flatwater Fracas, a massive tournament in Nebraska. Last weekend, Great Bend had a high showing in the first annual Dodge City Invitational versus multiple highly ranked Class 6A schools.

Manhattan won with 203 points, Dodge City was second at 176, Great Bend third at 158.5 and Garden City was fourth at 135.5. Manhattan, DC and GC are ranked 2-4-5, respectively in Class 6A. The seven-team tournament also featured Valley Center, Emporia and Gardner-Edgerton.

Liles took second at 120 and moved to 17-5 this season. In a stacked four-wrestler championship bracket, he defeated Garden City’s Silas Pineda, 2-0, in the semifinals.

At 145, Panther junior Gage Fritz also collected a title and moved to 20-1.

Fritz is ranked fifth at the weight class. He earned a 12-0 finals decision against Manhattan’s Darius Island-Jones, ranked sixth at 145 in 6A. Weber and Fritz are both returning state placers.