v Faces in KS: TJ Fritz - Sports in Kansas 
Warning: include(../includes/bodytag.php): failed to open stream: No such file or directory in /home/kansass/public_html/ks/news/index.php on line 36

T.J. Fritz is having a big year for Wamego. (photo: Amanda Luthi) 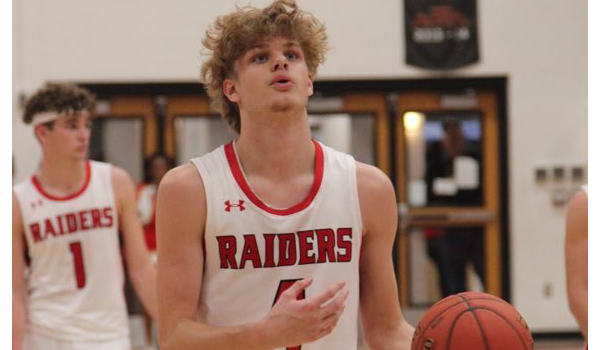 Wamego senior guard Thomas (T.J.) Fritz comes from highly athletic bloodlines. Fritz also has a lifelong love for basketball and a strong work ethic. The combination has yielded a 36-inch vertical jump, among the state’s highest, and one of Kansas’ leading scorers.

Through seven contests, the 6-foot-3, 175-pounder averages 22.9 points a game, fifth-best for all classes, according to MaxPreps statewide lists.

Fritz’s mother, Suzie, is from Clay Center. She has been the Kansas State volleyball coach since 2001. Suzie has delivered a 341-209 record (62 percent) and twice earned Big 12 Coach of the Year.

She played at Clay Center from 1996-90 and had a collegiate career at Barton County, University of Louisiana-Monroe and Florida Atlantic. T.J. said he has learned “so many things” from his mother.

Her brothers, Dave and Jon, have coached many years at the collegiate and high school football levels. Their mother, Sandi, has long been involved in baton twirling, and their father, Larry, coached Clay Center football for 25 years.

Fritz’s dad, Steve, is an athletic legend in three towns: Gypsum, Hutchinson and Manhattan. Steve attended Gypsum-Southeast of Saline, near Salina. The SES football field is named after him.

T.J. still remembers going to his paternal grandmother’s house. He shot on a little outside basket with a plastic ball. T.J.’s grandmother, as a senior citizen, played 1-on-1 against him.

His basketball passion has continued throughout grade school, junior high and high school. Fritz said the vertical jump is part natural ability but also plenty of work on weighted box jumps, running and the VertiMax apparatus.

“My love just kept getting stronger,” he said. “It hasn’t stopped since.”

Steve’s first goal after high school was basketball. He elected to take the junior college route and went to Hutchinson Community College. In 1988, he hit the game-winning shot at the NJCAA tournament championship game.

While on the basketball scholarship, Fritz decided to join the track team and started decathlon. He eventually won the junior college national decathlon championship. Fritz attended Kansas State, earned a track scholarship and walked onto the basketball team.

Fritz took fourth in the decathlon at the 1996 Atlanta Summer Olympic Games. Fritz then served as a Wildcat assistant track and field coach for 21 years.

T.J. went to school in Class 6A Manhattan and then transferred to Riley County, generally a 3A school.

“I thought about going to a big school,” T.J. said. “But I felt I’d fit more with how I play and just all that with a smaller school.”

Riley is 27 miles northwest of Manhattan.

“He has always had a passion for basketball, and he has always loved the game,” T.J. said. “And he just wanted to get into it, and we all supported him for whatever he was going to do, and it was really fun learning from him.”

Steve Fritz coached three years at RC including a 15-win year has marked the second-most single season victories for the Falcons since 2005-06.

“He has got to a really high level in the sport and just learning from him really helped me and he was hard on me, because he was my dad,” T.J. said. “Which is good, you need that person in your life to help you get through the tough times and even the easy times, even when you don’t think it’s that hard.”

Two years ago, the family again moved, this time to Wamego, 22 miles east of Manhattan. Wamego has nearly twice the enrollment of Riley County.

T.J.  said the change “worked out well.” The Class 4A Red Raiders are 3-4 this season, and have consistently been a winning program with longtime coach Troy Hemphill.

“Letting the players play is really important to him,” Fritz said. “And just the experience level from the seniors and the upperclassmen to the underclassmen that they just need to be intense leaders and play basketball is the biggest thing.”

Since 07-08, Wamego has been under.500 just twice. Wamego went 16-7 last winter and lost in the first round of the Class 4A, Division I state tournament.

“More exposure to better competition I would say,” T.J. said of the change to Wamego. “Bigger school, more athleticism, bigger players, just try to get out there more. It was challenging, but we knew it was probably the best choice for us, just to go to a bigger school to help me get to the next level for sure.”

“But it was hard leaving friends and stuff,” he added. “But we fit in really well and Wamego really accepted us, so it wasn’t as hard as we thought it was going to be.”

“It’s really helped me get stronger and more physical for the game for sure, and just expand and see who else is out there, and who else I have to beat out to get to the next level,” T.J. said.

This winter, Steve became the Wamego assistant girls’ coach, a position he has greatly enjoyed.

As well, the Wamego boys’ team added another transfer with junior Taybor Vetter. Like Fritz, Vetter has played at multiple schools. One of the state’s most electrifying returners in football, Vetter attended Beloit and then Rock Creek before he came to Wamego.

It’s very rare for a high school basketball team’s top-two scorers to both be transfers. Fritz and Vetter didn’t know each other personally before Vetter moved in, but quickly bonded.

“We just both want to win, and we just clicked because of that,” T.J. said.

Fritz models his game after legend Kobe Bryant, also a high-volume shooter and scorer. Fritz has 137 field goal attempts, for 19.6 per game. He leads Kansas in field goal attempts per contest. However, Fritz, who has not received any collegiate offers yet, can deliver a flurry of points.

An avid collector of sneakers, especially old-school models, Fritz’s favorite basketball pair is Jordan 11 Legend Blue. He has worn the pair when he had his first in-game dunk, met his first college coach and had his best scoring output, a 48-point showing last summer.

“In my eyes, Kobe is the greatest player of all time, and you know people argue Michael Jordan or LeBron, but I model my game after Kobe because of his mentality and his killer instinct,” Fritz said. “…Really go at the dude across from him, and be the best player on the floor as long as he can, and it just proved to me that I should work extremely hard to do that.”

From my mom and dad in the drive way.

All-state and to get a state title and get D1 offers.

Yes, we just need to work and as a team listen to our great coaching staff.

It’s amazing. We all know each other and everyone is electric and supportive at the games.

To watch us play great defense and turn it into offense on the break.

Strengths: scoring, rebounding, getting my teammates open, and getting everyone on the same page. Weaknesses: defense.

Our point guards Taybor and Ty, they create so many opportunities for everyone else it makes us as a team better and they are kick down defenders.

The way the game flows and how people react to a great play or a close game.

I used to play baseball, and I was a pitcher.

It’s really fun. He understands what the players want, and let’s us play ball. He’s one of the best out there.

Summer ball and getting in the gym and running up and down to get to know each other on the court, but also bonding off the court.

I’m getting some interest from some D2 and NAIA. But my goal is to go D1, and I will work to get there.

Chillin with my friends and playing Fortnite.

Owning my own business or playing pro ball.

English, and I am a OK student. I love communicating in class, and I have a 3.3 GPA.

Kobe Bryant, I model my game after one of the greatest to ever play.

Barley corns and get the devils tail.

That I love to shop, and I am a sneaker head.