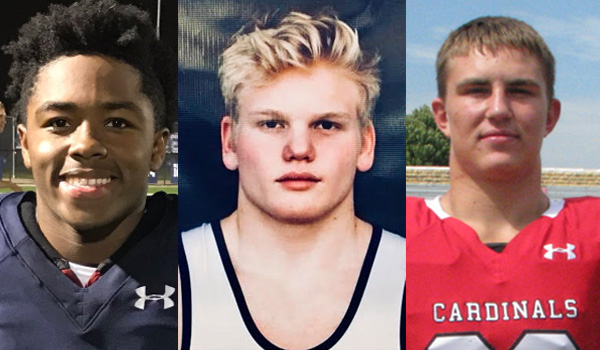 Sports in Kansas has released it's Non-Senior Player of the Year Honors, honoring the top player on offense and defense in the state that's not a senior. Due to a tie in voting on defense we have a Co-DPOY.

2018 Sports in Kansas Non-Senior Offensive Player of the Year

Young led the Saints (12-0) to an undefeated state title in 2018, the schools first ever, as he rushed for 2,075 yards on 214 carries with 26 touchdowns. The sophomore, who just picked up an Iowa State offer, averaged 9.7 yards per carry.

St. Thomas Aquinas High School would like to congratulate Tank on an outstanding sophomore season and congratulate all of the Saints on the 2018 state title.

Lautt, a 5-foot-10 and 220-pound junior linebacker, is pound for pound one of the strongest players in the state and also one of the hardest hitting, just check out his HUDL from 2018. The all-state linebacker was also a first team All-EKL pick as a junior in 2018, the states best league loaded full of state championship contenders and all-state linebackers. Lautt benches 350, squats 505 and is also one of the top wrestlers in the state. His older brother currently wrestles at North Carolina and was a multiple time state champ at SJA. Lautt registered 120 tackles in 10 games over 2018.

St. James Academy would like to congratualte Cade Lautt on the 2018 Sports in Kansas Non-Senior Defensive Player of the Year in all classifications of Kansas. We are proud of you!

Pedigo, who stands 6-foot-1 and weighs 210 pounds during football season, was the top two-way player in 2A this season and likely the top non-senior two-way player in Kansas. He rushed for over 2,100 yards on offense and added 104 tackles (9 TFLs) on defense. Pedigo is one of the toughest players in the state and was the 182-pound state wrestling champion in 3-2-1A in 2018 as a sophomore. In addition to his 2,000+ yards on offense that averaged over nine yards per carry, he added 32 touchdowns on the year for the Cardinals in 11 games. He missed week one of the season with injury to state runner-up Pratt (3A). He was also able to rush for 284 yards combined over two games against 2A state champ Phillipsburg.

First Kansas Bank in Hoisington would like to congratulate Wyatt Pedigo on an oustanding junior season.

Sports in Kansas Non-Senior Offensive Player of the Year Finalists

Sports in Kansas Non-Senior Defensive Player of the Year Finalists