v Sports in KS:Around the State Basketball Update-12/11/18 - Sports in Kansas 
Warning: include(../includes/bodytag.php): failed to open stream: No such file or directory in /home/kansass/public_html/ks/news/index.php on line 36

Peyton Verhulst is one of hte best players in the country. 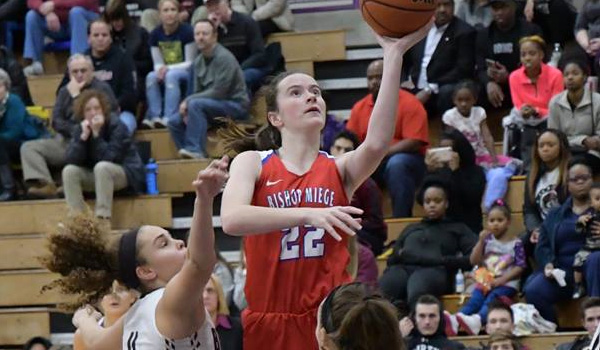 Since 2005-06, Derby was 0-4 versus McPherson, including a 54-49 loss last season, the Panthers’ only defeat. Derby received 11 points from Sydney Nilles and Kennedy Brown (Oregon State signing) and 10 from Aliyah Myers. Derby delivered an exceptional defensive effort and limited the Bullpups to 26 percent shooting.

Derby boys defeated McPherson, 44-42. In an extreme rarity for the tradition-laden Bullpups, McPherson is 0-3, though has lost one game in overtime and another contest by two points.

This Tuesday, Derby gets another big matchup with Maize. The Eagles have two Division I players with the girls’ Halie Jones and the boys’ Caleb Grill.

In this week’s rankings, Derby girls remained No. 1 in 6A. Maize is third in 5A girls, up a spot from fourth. McPherson drops from third to sixth. Derby boys dropped from eighth to tenth. Maize boys moved from fifth to fourth.

The Wichita Southeast boys beat Bishop Carroll, 56-55, on a last-second shot and ended the Golden Eagles’ 15-game winning streak. Carroll is the defending 5A titlists. Jerrelle Burnett delivered the game-winning basket in the final second. SE had lost three straight to Carroll.

Wichita Southeast remained fifth in 6A boys, and Carroll dropped from first to sixth.

Liberal bumped a spot from sixth to fifth in 6A in Tuesday’s rankings.

In the Finney County rivalry, Garden City defeated Holcomb, 48-46, in the final game of the Clarion Inn Roundball Classic tournament. GC moved to 4-0 as Jackson Dirks tipped in a shot at the buzzer for the win.

Holcomb, ninth in 3A, came back from six down in the final minute. Carlos Acosta paced the Buffs with 17 points, including 3 of 9 from 3-point range and 4 of 4 from the free throw line.

Salina Central survived an upset from Great Bend in a 56-38 road victory. SC ended the game on a 12-0 run. Great Bend dropped to 0-5 as SC sunk 10 foul shots and made three treys in the fourth quarter. Mark Grammer tallied 24 points to lead the Mustangs, and GB went 4 of 26 from 3-point range. SC moved from No. 3 in 5A to No. 2.

Emporia boys captured the Hesston tournament title with a 66-39 victory against Nickerson. Emporia forced 43 turnovers behind a great defensive effort from Beau Baumgardner. Sophomore Charles Synder led Emporia with 15 points and has paced the Spartans in scoring for three straight contests.

Bishop Miege girls, the No. 1 team in 4A, headed to the Arkansas Tournament of Champions for a matchup with some quality out of state opponents. The tournament was changed to Thursday and Friday because of the weather.

Miege beat Howe (Okla.) on Thursday night, 74-62, and then Friday afternoon, the Stags delivered a 73-59 victory against Ponca City (Okla.). The Stags have announced they will return next year. Against Howe, the Stags trailed 18-11 at the end of the first quarter before a 21-12 advantage in the second quarter.

Payton Verhulst, one of the country’s top recruits, delivered 32 points and seven rebounds versus Howe. She helped Miege with a plus-eight margin on the glass, and forced 14 more turnovers. Jordynn Gonzalez recorded four assists.

As expected, the Ulysses girls met Hugoton in a matchup of ranked teams in the final of the Hugoton Blue and Red tournament. Ulysses led 21-3 after the first quarter and rolled to a 62-35 victory. Gina Ballesteros tallied 19 points and Madison Haney scored 13.

With the tournament title, Ulysses moved from ninth to sixth in 4A. Hugoton was seventh but fell out of the rankings this week.

The Circle girls won its own T-Bird Classic in the matchup against the AVCTL and SEK with a 60-51 double-overtime victory against Parsons. The T-Birds played without outstanding shooter Carissa Beck.

Junior Mallory Cowman tallied 16 points, and senior Alyson Potter tallied 12 points. Circle stayed at third in 4A, and Parsons is unranked. Nena Taylor paced Parsons with 20 points. Down 31-21 in the fourth quarter, Circle had a 13-0 run to take the lead.

Parsons, ranked fifth in 4A boys, defeated Circle, 56-50, to win the championship. Parsons missed Dariq Williams because of injury, and Joel Schibi missed the game for personal. Still, junior Zeke Lyons delivered a personal best 26 points for the 3-1 Vikings.

In a key 3A girls’ game, Nemaha Central defeated Royal Valley, 71-52. NC took over the top spot in 3A after the Thunder was second last week. Royal Valley dropped from first to fifth.

The Hugoton boys’ basketball team captured its own Blue and Red Classic tournament with a 69-65 victory against Perryton (Tex.) as Damian Lewis made 10 3-pointers.

Halstead boys, the defending 3A state champion, moved to 5-0, including a 47-43 win Friday at Minneapolis.

Ness City boys trailed Northern Valley by 11 points in the Purple and Gold championship game Saturday night at WaKeeney-Trego. The Eagles, led by senior point guard John Pfannenstiel, came back with a huge third quarter for a 55-52 victory.

NC was down one but NV was called for an intentional foul on Pfannenstiel with 7.9 seconds left. He sunk four straight free throws. Pfannenstiel collected 26 points, including 9 of 10 from the free throw line, and Reinhardt had a double-double.

Ness City remained fourth in 2A, and Northern Valley dropped five spots to tenth in 1A.

The WaKeeney-Trego girls had a 10-win jump last winter and were expected to have another nice season this year. The Golden Eagle girls won their tournament for the first time with a 32-24 victory against Oakley in a matchup where both teams shot under 30 percent and neither team made a 3-pointer.

Sophomore Lili Shubert, WaKeeney’s leading scorer and rebounder as a freshman, scored 13 points and 11 rebounds. Shubert had a key defensive rebound that led to a full court dribble and two free throws with 42.3 seconds left that made the score a two-possession game.

The Inman girls moved from seventh to fourth in 2A after they captured the Moundridge Preseason Tournament Championship with a 47-32 victory versus rival Moundridge. The Teutons are 4-0 and led 8-0 early. Moundridge came back but Inman outscored the Wildcats, 31-18, in the second half. Lauren Maurer led with 15 points, and Macy DeWitt tallied 10.

The Inman boys, still second in 2A behind Colgan, also captured the Moundridge title with a 57-30 win versus Moundridge. Payton Froese also exceeded 1,000 career points last week. Against Moundridge, Inman limited the Wildcats to 24 percent shooting, and Froese had recorded 18 points.

At Quinter, Hoxie boys, fifth in 2A, moved to 4-0 and won the Castle Rock Classic with a 58-52 championship against Ellis. The Hoxie girls (4-0) also won the championship with a 46-38 championship game victory versus Atwood-Rawlins County. The girls stand second in 2A.

Yates Center boys, seventh in 2A, captured its own Wildcat Winter Classic for the second straight year with a 46-43 final against Sedan. YC (4-0) trailed entering the fourth quarter and outscored Sedan, 14-9, in the fourth quarter. Sedan had three players in double figures, led by 15 points from senior Layton Sears.

In the Topside Tipoff boys’ championship in Goodland, Lakin fell to Yuma, Colo., 68-57, in the championship. Lakin (2-1) trailed by 21 points at halftime. Henry Chou paced the Broncs with 18 points.

The Belle Plaine boys (4-0) captured the Preseason Douglass tournament with a 71-41 victory versus host Douglass. BP led by 29 at halftime. Eli Wiseman delivered 18 points as the Dragons shot 55 percent from the field.

At the Humboldt Pre-Season Tournament, Erie girls won the round-robin event with a 3-0 mark, and Uniontown was second at 2-1.

Beloit/St. John’s-Tipton girls won the Osborne preseason tournament and moved into the rankings for the first time at No. 9. The Bluejays delivered a quality win, 34-29, against Thunder Ridge on Friday. TR dropped four spots from sixth to tenth in 1A.

After the tournament, Kresin is 203-60 in his career, including four 20-win seasons, a 2014 state championship and three other state tournament appearances, including last year’s 19-5 squad. Kresin is also the longtime successful BSJT football coach.

Osborne boys defeated Beloit/St. John’s-Tipton, 57-47, in the final to win its own tournament. The Bulldogs led 25-14 after the first quarter.

South Gray girls defeated Meade, 42-36 in overtime, to win the Bluejay Invite tournament Saturday in Cimarron. Meade was fifth in 2A, and SG was unranked in 1A last week. Meade fell to ninth, and SG remains unranked.

The game was tied at 31 at the end of regulation. Meade broke a 29 all game with a jumper with 1 minute, 23 seconds left, but SG tied the score. The Rebel were plus-10 on the glass against Meade, and Hannah Askew had game-highs 16 points and 14 rebounds, and also paced her team with two assists. She is averaging 12.3 points and eight rebounds a contest for the 3-1 Rebels.

South Gray boys defeated Cimarron, 53-41, to capture the boys’ side at the Bluejay Invite. SG led by five at halftime. Clifton Miller recorded 23 points and 12 rebounds for the third-ranked Rebels.

As expected, Central Plains girls rolled to the Amos Morris tournament title in Russell. The Oilers are 4-0 and have captured 88 straight contests. Because of the tournament’s six-team bracket, the Oilers had to play Phillipsburg twice and earned a 66-19 victory in the championship game.

The Central Plains boys (4-0) also rolled to a crown in Russell with a 46-27 victory versus Phillipsburg, ranked eighth in 3A, and featuring Trey and Ty Sides. CP outscored the Panthers 26-7 at halftime. Both CP squads are No. 1 in 1A again.

St. John boys (4-0) beat host Larned in the final of the Gene Keady tournament, 52-45. SJ had a two-point lead entering the fourth quarter, and the Tigers outscored Larned, 20-15, in the fourth quarter. In the semifinals, SJ defeated Hoisington, 52-46.

This week, Central Plains plays St. John in a high profile Central Prairie League rivalry. The St. John girls went to state last year. CP boys are ranked first in 1A, and St. John boys up a spot to second in 1A.

Rural Vista senior Lauren Campuzano cleared 1,000 career points in a victory against Lebo in the Herington tournament. RV (4-0) captured the championship, 48-37, in a win against Chase County. It marked the Heat’s closest game of the year.

The Frankfort girls rolled to the Alma-Wabaunsee tournament championship with a 68-18 championship victory versus Solomon.

Frankfort is third 1A behind Central Plains and Olpe.

Hanover and Centralia played in its big Twin Valley League rivalry last Tuesday. Hanover boys opened with a 63-56 loss to Bishop Seabury, ranked third in 2A, and then rolled Centralia, 73-31. On the girls’ side, Centralia defeated Hanover, 48-35.

Hanover led 16-15 in the second quarter. The Panther girls opened the winter with a 57-35 loss to Nemaha Central. Centralia received a double-double from Maegan Koch with 10 points, 12 rebounds, three assists and five blocks against Hanover.

For the girls, Centralia bumped from eighth to sixth. Hanover fell from second to seventh. On the boys’ side, Hanover is sixth and Centralia is unranked.

Otis-Bison’s Maitland Wiltse tallied his 1,000th career point this weekend. Wiltse has been key on two straight state tournament qualifying teams. He is averaging 20.5 points and 11.5 rebounds per game for the Cougars this year.