v Holloway, Bruna named Sports in Kansas POYs in 8M-II - Sports in Kansas 
Warning: include(../includes/bodytag.php): failed to open stream: No such file or directory in /home/kansass/public_html/ks/news/index.php on line 36 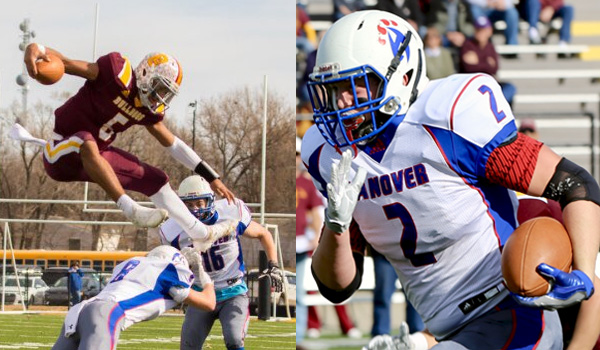 Sports in Kansas 2018 8M-II Offensive Player of the Year

Holloway led Osborne, with just 12 active players nearly all season, to an 11-2 record and Eight-Man, Division II runner-up to Hanover. Holloway, a two-year starter after he and his brother Darrien transferred from Russell, finished with 147 carries for a team-high 1,616 yards and 31 rushing scores. He completed 56 of 79 passes (71 percent) with 992 yards with a 15/3 TD/INT ratio. Darrien was one of the top juniors with 1,574 rushing yards and 33 rushing TDs.

Darnell exactly doubled his rushing total from last year when he had 88 rushes for 808 yards and 14 scores. He significantly improved his efficiency from his junior season with he threw for 783 yards for 61 percent and a 12/5 TD/INT ratio.

Holloway had a standout game in the 58-50 championship game loss to Hanover, which has won 38 straight contests. The game was the most combined points in eight-man state game history. He threw for 115 yards and a score, and rushed for 158 yards and three TDs and nearly led a big second half comeback.

Congrats to Darnell Holloway on the 8M-II Sports in Kansas Offensive Player of the Year. Wilkens Manufacturing, Inc. is proud to support Darnell and his accomplishments!

Sports in Kansas 2018 8M-II Defensive Player of the Year

Bruna, a three-year starter, helped Hanover extend its winning streak to 38 contests and capture its third straight state title with a 58-50 win against Osborne.

He was a first team all-league selection at running back and linebacker.  The 6-foot-1, 210-pound Bruna finished with 69 total tackles, seven TFLs, one interception and was one of the state’s leaders for all classes with seven fumbles recovered. Bruna also forced two fumbles. He finished 50-1 in his career and has helped Hanover to the longest eight-man winning streak since the ‘80s.

Against Osborne, Bruna delivered 14 tackles, which was a season best and tied his career high. The Bulldogs took over with three and a half minutes left and down a score.

Hanover moved Bruna to the defensive line, and the Wildcats held Osborne without a first down on the final drive. This season, Bruna set career bests with 1,106 rushing yards and 21 rushing scores. In his career, Bruna delivered 189 tackles, 21 for loss.

Bruna is the last child in his immediate family that had 10 children, eight boys and two girls. Many of the Brunas have led Hanover athletics in the last two decades, including older brother Will, who set multiple state eight-man records as a quarterback before he graduated two years ago.

Congrats to Hanover HS Linebacker Carter Bruna on being named the 2018 8-man Division II Player of the Year from Sports in Kansas. Congratulations from Bruna Implement Company. We are proud of you!