v Raby, Liebl pick up Sports in Kansas 8M-I top honors - Sports in Kansas 
Warning: include(../includes/bodytag.php): failed to open stream: No such file or directory in /home/kansass/public_html/ks/news/index.php on line 36 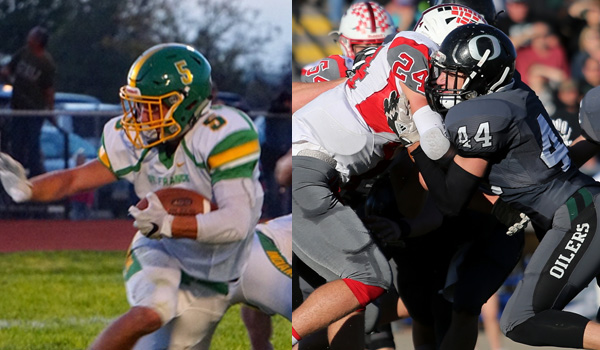 2018 Sports in Kansas 8M-I Offensive Player of the Year

Last year, St. Francis finished 7-2 and lost to Spearville in the first round of the playoffs. SF finished a season of turmoil with just 13 players. Raby and quarterback Brady Dinkel were the only starters back for the Indians, which had reached the Division I state title game in ’16.

Nick Fawcett, formerly a Hays High assistant coach, took over as SF head coach, brought more fun to the game, significantly increased the roster and instilled the single wing. SF, unranked in the preseason, finished No. 2 in the Division I final rankings with an 11-1 record.

Known for his quickness and one of the best track athletes in 1A/2A, Raby often took the direct snap, waited for openings in the single wing, and then found the hole. He had 1,425 rushing yards, while Dinkel delivered 1,049. Raby helped the Indians deliver 42.3 points a contest, and Raby enjoyed a big performance in a signature win versus No. 4 Hoxie, 64-30, in Week 5.

2018 Sports in Kansas 8M-I Defensive Player of the Year

Coach Chris Steiner, who also led the Oilers to a ’14 state crown, said this year’s defensive line of seniors Liebl, Mason Doll and Grant Heldstab was the best he has ever coached. Liebl paced the state with 20 sacks and was the team’s third leading tackler with 79 stops. He also had 12 TFLs, 19 quarterback hurries, four blocked punts and three forced fumbles. In the state title game, CP beat Solomon, 52-6, and limited the Gorillas to negative total yards and zero offensive first downs at state.

Outside of the numbers, Steiner was very pleased with Liebl’s intelligence and ability to read the offense. Liebl was sometimes more cautious than Heldstab and Doll and would wait for the screen or jam the tight end.

Additionally, teams sometimes ran away from Liebl, which allowed Heldstab to lead the team in tackles and tackles for loss. Liebl moved to guard from tight end and had nine catches for 200 yards and six scores. He was first team all-league on both sides of the ball. Liebl missed all 11 games as a freshman and was second team all-league defensive line as a sophomore. Last season, he played in just four games as CP went 9-2. He's also one of the best basketball players in the state for 1A after leading CP to an undefeated state title in 2A last season.

First Kansas Bank would like to congratulate Brett Liebl on Sports in Kansas 8M-I Defensive Player of the Year and the Central Plains Oilers on the 2018 8M-I state title!

Congrats on the 8M-I Player of the Year – From your family – Mom, Dad, Corey, Adam, Gina, and Evan!